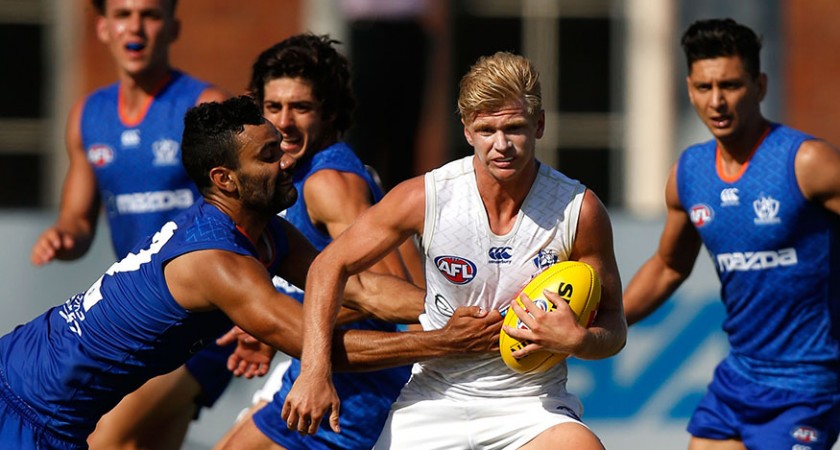 By Peter Blucher. Another pair of AFL brothers?

Corey Wagner has moved one step away from completing Queensland’s eighth set of brothers to play AFL football.

In his first season at North Melbourne after being taken at No.43 in last year’s NAB AFL National Draft, Wagner last night was named as an emergency for the first time by Kangaroos coach Brad Scott ahead of the Round 9 clash with Carlton at Etihad Stadium on Saturday night.

It is another step in what has been a phenomenal year for the Wagner family after older brother Josh, in his first season at Melbourne, has forced his way into the senior side and looked more than comfortable at the top level.

And while Corey may have privately been a little impatient of late after Josh jumped from the Demons rookie list into the AFL spotlight ahead of him it is a fine effort for Corey just to be in the selection mix with the unbeaten ladder leaders so quickly.

Wagner Jnr, a 19-year-old Brisbane Lions Academy product via Sandgate and Aspley, was rewarded for good recent form with North Melbourne affiliate club Werribee in the VFL after a couple of eye-catching pre-season performances in the NAB Cup.

If and when he breaks into North side the Wagner boys, who played together at Aspley in the NEAFL last year, will join some elite company on the Queensland football honour roll.

Collectively, the brother/brother division of the Queensland AFL family boasts no less than eight premierships in what should be a clue to the identity of at least some of them.

Think about it before you read on. Who are they?

David and Stephen Wearne became the first pair of Queensland brothers to play at the elite level in 1992 when Stephen debuted for Melbourne after David had players for the Brisbane Bears in 1990.

Next was the only trio of brothers to play AFL football – Che, David and Donald Cockato-Collins. They followed in the Wearne footsteps when twins David and Donald debuted together for Melbourne in 1996 after Che had joined the AFL with Essendon in 1994.

Then it was Clark and Aaron Keating, who are the only Queensland brothers to each win an AFL flag. Clark, a triple premiership player with the Brisbane Lions in 2001-02-03, debuted for the old Bears in 1996 before Aaron played for Adelaide in 1997, winning a premiership in only his third game.

The brother/brother club welcomed it’s fourth pairing in 1997 when Brett Voss debuted with the Brisbane Lions after Michael Voss, a Lions triple premiership captain, had done so with the Bears in 1992.

Three more followed in 2011. First, Claye Beams debuted for the Brisbane Lions in Round 1 after Dayne Beams, a Collingwood premiership player in 2010, had broken into the Magpies side in 2009. Then, a week later, Alik Magin was a member of the very first Gold Coast Suns side after brother Rhys had played for Essendon in 2008. And in Round 22 Joel Tippett, now at North, debuted for the Suns after Kurt Tippett, now at Sydney, had played first for Adelaide in 2008.

But while the Wagner boys were in high spirits last night it wasn’t such good news for the Beams brothers at Round 9 selection.

Having played together last weekend for the 10th time since Dayne moved from Collingwood to Brisbane last year both were ruled unfit for the Lions’ MCG clash with Melbourne on Sunday.

While Claye is not expected to be sidelined for long with a minor adductor problem the prognosis on Dayne following a recurrence of knee tendonitis is more long-term.

The Beams brothers were forced out as Lions coach Justin Leppitsch made at least six changes in the wake of last Saturday night’s poor loss to Collingwood at the Gabba.

It was a shake-up that saw Sunshine Coasters Jono Freeman and Eric Hipwood, each coming off four goals in the NEAFL last weekend, included on an extended interchange bench in a 25-man squad to be trimmed to 22 Friday night.

Freeman is in line for his first senior outing since Round 1, and given the omission of full forward Josh Walker, who has played as a key forward for the first eight rounds, it would seem likely the 22-year-old will get a start against Melbourne at the MCG on Sunday.

Hipwood, the Lions’ first selection in the 2015 National Draft, would become the fifth Queensland AFL debutant of the year if he was included in the final side.

But the fact that coach Leppitsch and the club so publicly confirmed on Wednesday night that Rhys Mathieson will debut this weekend and no such fuss was made of Hipwood the lanky teenager will have to wait.

If Hipwood was going to play the club would have looked to maximise what would have been another good news story after he recently committed to the club to the end of 2019.

It is more likely, then, that Hipwood’s first inclusion in the AFL Record as a member of the Lions match day squad will be as an emergency.