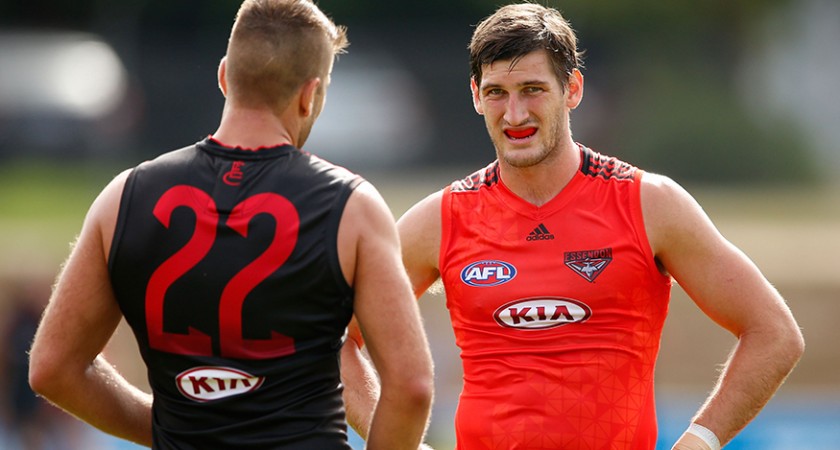 Sam Michael is a perfect example of a young man who simply will never give up.

Eighteen months after it seemed like his AFL career was over when he was de-listed by the Brisbane Lions Michael is one step away from a return to the elite level with Essendon.

Having won the Bombers 10th and final top-up list spot this year after a short-term call-up in the 2015 pre-season, Michael was last night named as an emergency for the Saturday afternoon clash with North Melbourne at Etihad Stadium.

It is his second time in the senior match squad, having already been an emergency for the season-opener against Gold Coast at Metricon Stadium.

He’s desperately hoping for a late call-up which would see him shed a statistic that, while very frustrating, defines his enormous perseverance.

Michael, originally from Cairns, has had more years in the AFL system than he has played games.

He played at Redland in the NEAFL in 2015 after enjoying a top-up stint with Essendon in the NAB Cup, and was set to play at Victoria Point again until Essendon threw him one more lifeline.

The Bombers of the AFL variety remembered how well the 199cm 22-year-old Redland Bomber fitted into their training squad last year, and gave him the last spot on the 2016 senior list.

He has impressed in the VFL playing in the ruck and in key position posts at both ends of the ground, but it was his form in the ruck pre-season that won him an Essendon contract.

Ironically, just as it was at the Lions, Michael finds his pathway to the senior side at Essendon blocked by Matthew Leuenberger after Leuenberger joined the Bombers this year as a free agent.

While Michael will be hoping for a fairytale call-up in Melbourne on Saturday afternoon, his former Redland teammate Josh Smith will be playing out his own fairytale in Brisbane on Saturday night.

Smith will play his fourth AFL game for Collingwood and his first in Queensland against the Brisbane Lions at the Gabba.

He has impressed with his calm and class on the wing and across half back, collecting 70 possessions in three games.

Yet another ex-Redland player, Adam Oxley, will also enjoy a Gabba homecoming with the Magpies Saturday night. It will be his third AFL game in his home state, having enjoyed travelling wins over Brisbane and Gold Coast last year.

Smith and Oxley will be joined the Collingwood side by a third Queenslander, Jesse White.

In other Queensland news to come out of Round 8 selection last night:-