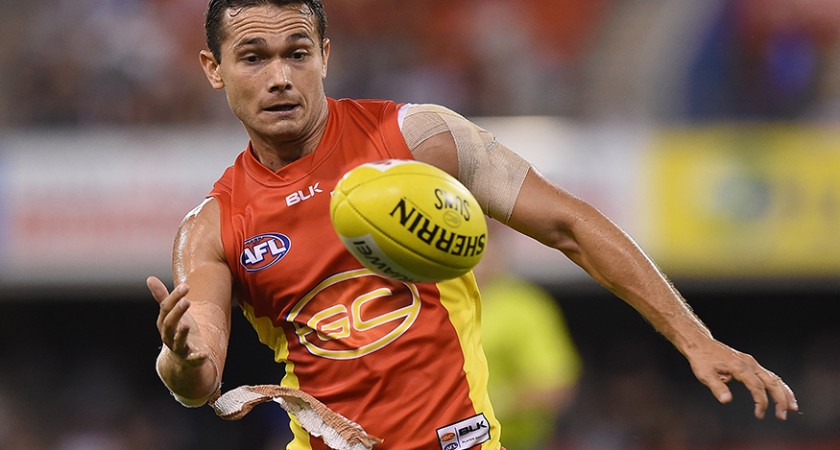 Queenslander Jarrod Harbrow on Saturday will become the first player to post 100 AFL games for the Gold Coast SUNS.

His milestone in the crunch twilight clash with Melbourne at Metricon Stadium is the headline Queensland news for Round 7 of the Toyota AFL Premiership.

In other Queensland news to emerge from Thursday night selection, Dayne Beams was cleared to make a welcome return for the Brisbane Lions against Port Adelaide at Adelaide Oval on Sunday, and Jesse White was recalled to the Collingwood side for Saturday’s MCG clash with Carlton.

Aliir Aliir, who made a much-publicised debut at the Gabba last Sunday, was squeezed out of the Sydney Swans side by the return of All-Australian defender Nick Smith. Aliir was named as an emergency.

Cairns-born Harbrow will strike yet another blow for the brigade of footballers who have had to do it the hard way as he posts his 100th game for the SUNS.

A product of the Manunda Hawks and later South Cairns and a Queensland U16 and U18 representative, Harbrow moved south to follow his football dream as a 17-year-old, joining the Murray Bushrangers in the TAC Cup.

It didn’t work out initially when he was overlooked in the 2006 AFL National Draft, but he got his chance with the Western Bulldogs via the 2007 Rookie Draft and hasn’t looked back.

After a short stint with Werribee, the Bulldogs’ VFL affiliate at the time, he made his AFL debut under coach Terry Wallace in a big Friday night clash against Richmond at the MCG Round 4 2007.

He shared his debut  for the Dogs with fellow Queenslander Tom Williams and Tigers Shane Edwards and Jake King. Jordan McMahon played his 100th game for the Dogs on the same night as they won by 32 points.

But the lure of home was always strong. And when the SUNS were presented with an opportunity to sign up to 16 uncontracted players from opposition clubs he quickly committed to the expansion franchise.

Harbrow was a member of the SUNS very first AFL side against Carlton at the Gabba in 2011.

Interestingly, only two others members of that side – Ablett and Dion Prestia – will line up with him for his 100th game on Saturday.

For the record, the SUNS’ first side as named was:-

He represented Australia in the 2013 International Rules series.

He’ll be hoping his 100th SUNS game produces a better outcome than his 100th AFL game in Round 18 2012, when the SUNS were beaten by the Sydney Swans by 72 points at Metricon.

Of his club century, 27-year-old Harbrow said: “It’s a small little milestone (but), something I’m pretty proud of”.

And so, too, is Queensland football.

QWAFL Preview: Round 3
Friday Forecast: Round 5