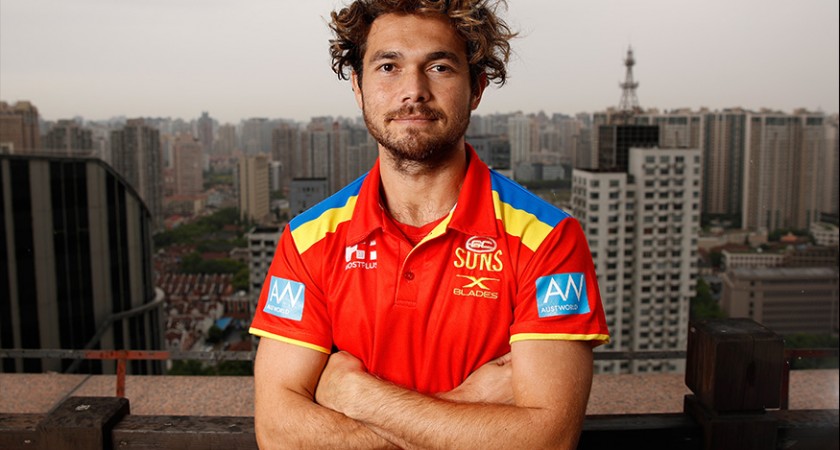 Jarrod Harbrow will return home from the Gold Coast Suns’ historic visit to China with a memorable personal keepsake.

The Suns games record-holder, playing his 120th game in the red and yellow, had a club best 35 possessions in the disappointing 72-point loss to Port Adelaide at Jiangwan Stadium in Shanghai.

It was the second-highest possession count of his 190-game career, behind only his 36 possessions for the Western Bulldogs against St.Kilda at Etihad Stadium in Round 6 2000.

Harbrow, who took his family and mother-in-law to the first AFL game for premiership points played outside Australia and New Zealand, was a standout for the Suns in front of a crowd of 10,118.

The free-running defender had seven marks, eight rebound 50s and four inside 50s for a Champion Data ranking score of 105.

It was the fifth time in six games this season Harbrow has topped 100 CD points after an injury-delayed start.

Teammate Jesse Joyce also will have fond memories of his China visit despite the big loss – he kicked his first AFL goal.

Fellow Queenslander Rory Thompson travelled all the way to China expecting to make his comeback from a five-week thigh injury only to strain his hamstring in the warm-up.

There was pandemonium in the Suns camp as travelling emergency Keegan Brooksby was pulled out of a corporate function to take his place in the side.

The only Queenslander to return from China with a win was Charlie Dixon.

Enjoying a rich vein of form, the former Suns spearhead was an especially damaging player when the game was on the line in the first half and finished with 17 possessions, nine marks and two goals.

For the fifth time in eight rounds the Brisbane Lions Dayne Zorko posted the highest Champion Data ranking score among the Queenslanders.

He earned 119 points for a team-high 31 possessions (14 contested possessions), eight clearances and 11 tackles in the Lions’ 38-point loss to Hawthorn in Launceston.

Like Harbrow, it was Zorko’s fifth 100-point score of the season.

Tom Bell, returning to the Lions side after two weeks in the Reserves, had a season-high 19 possessions and a goal, while Eric Hipwood was lively up forward with 10 possessions (8 contested possessions) and two goals.

St.Kilda’s Sam Gilbert posted the other 100-point score for the Queenslander in Round 8.

He had 23 possessions and nine marks in the Saints’ 19-point win over Carlton for 109 CD points.

In the same game, Nick Riewoldt had 19 possessions, six marks and a goal.

Zac Smith returned to the Geelong side and was among the few good players in a side well-beaten by Essendon at Etihad.

Josh Wagner, in his second game back from injury, made his first visit to Adelaide Oval and left with 19 possessions and the best win of his career after Melbourne stunned ladder-leaders Adelaide.

Fremantle pair Lachie Weller (15 possessions) and Lee Spurr (18 possessions) also enjoyed a win to remember when ex-Dockers captain David Mundy kicked a goal after the siren to give them a two-point win over Richmond at the MCG.

Collingwood’s Josh Smith (15 possessions) was on the wrong side of a nail-biting finish when the Pies went down to the GWS Giants by two points in Sydney.

Sadly, Sam Reid would not have been in a celebrating mood despite the Giants win – he was concussed early in the second quarter and took no further part.

The only consoling fact for Reid is the quirky statistic that he’s now played in 12 consecutive wins for the Giants after his first 14 games for the club were losses.