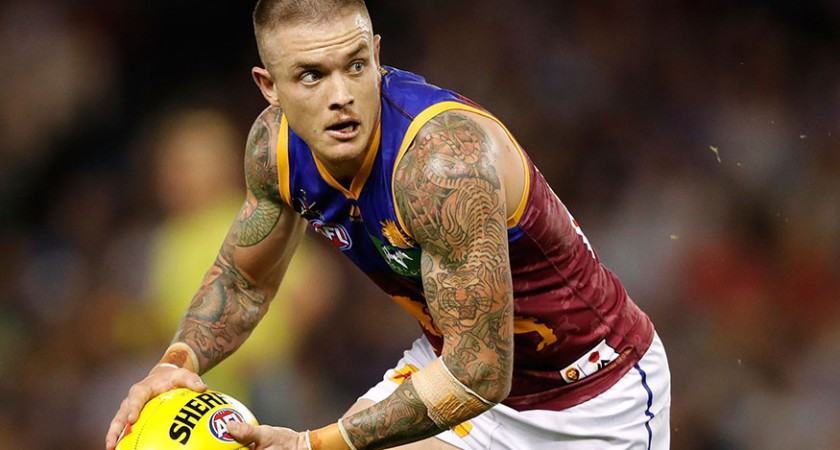 Claye Beams will compete an AFL ‘grand slam’ with his 50th AFL game for the Brisbane Lions against Hawthorn in Launceston on Saturday.

The talented but unlucky 25-year-old, in his eighth year in the AFL, has played against every opposition club except Hawthorn and every AFL state except Tasmania.

In what is a triumph for persistence and perseverance he will do both for the first time as he reaches a milestone which he could have been excused for thinking would never get here.

The injury-prone Beams, who debuted in Round 1 2011 as a 19-year-old, has missed almost twice as many games as he’s played.

And it’s not as if he’s been anchored in the Reserves. The classy back flanker/utility has played only 16 games at NEAFL level since his AFL debut.

The Lions have played 140 games in the same period, but he’s been denied a chance to secure a regular senior spot by foot and knee injuries.

In a statistic that will make him wonder what might have been, Beams has played Round 1 in five of his seven years, and 29 of his 50 games will have been in the first eight rounds of the season.

Insiders at the club will tell you he’s definitely good enough – if his body will let him do it.

When Beams runs out for his milestone game on Sunday only four teammates from his debut game will be there again – Rohan Bewick, Ryan Lester,, Daniel Rich and Tom Rockliff.

Two other players who were on the Lions list in 2011 are still at the club – Ryan Harwood and Dayne Zorko. And five are playing at other clubs – Jack Crisp (Collingwood), Josh Green (Essendon), Billy Longer (St.Kilda), Jared Polec (Port Adelaide) and Elliott Yeo (West Coast).

Coincidentally, Bewick and Lester debuted on the same day as Beams. Bewick will play his 97th game on Sunday and Lester his 88th.

Rockliff played his 21st game in the debut of the young trio and will play his 147th game this week, while Rich has taken his games tally from 47 to 151 in the same time.

Still if you’d told Beams in a couple of years before his debut that he’d play 50 AFL games he would have laughed. He wasn’t even playing football, and was focussed on a promising cricket career.

Born in Melbourne before moving to the Gold Coast aged two, Beams, younger brother of Lions captain Dayne, had played football from age five at Mudgeeraba. He won the Gold Coast League U12 B&F medal, played in the Queensland Primary Schools side, and was runner-up in the U14 League B&F medal.

He represented the Gold Coast Stingrays at U14 level and the South Coast U15s, and played the first six games of his U16 season in 2007 before giving it away.

As he recounted when he made the switch batch to football: “Footy was always my dream and my passion – cricket was something I played in the off-season – but I was pretty small as a young kid and realistically I thought I had more chance of making it in cricket.”

He had fair reason to say as much. Playing cricket against men from the age of 12, he played two years first-grade cricket with Mudgeeraba/Nerang in the Gold Coast competition as a wicket-keeper/batsman, and 2008 was chosen in the Open Age Gold Coast representative team

It all changed in May 2009. “Watching Dayne play at Collingwood reignited the footy spark        and I decided to have a crack at it,” he said. “I figured you only get one chance and I’d forever wonder if I didn’t at least try my hand at footy.”

He joined Labrador and after a three-week training block played his first game in Round 9 of the QAFL Reserves before graduating to the seniors.

The Lions had seen enough. They took him as a 2010 rookie and within 12 months he was promoted to the senior list and jettisoned into the senior side.

Claye and Dayne Beams, who has played 134 games for Collingwood and Brisabne, are among eight sets of brothers to play in the AFL.

The others are Che, David and Donald Cockatoo-Collins, Clark and Aaron Keating, Alik and Rhys Magin, Kurt and Joel Tippett, David and Stephen Wearne, Michael and Brett Voss, and Josh and Corey Wagner.

But with Claye set to post his 50th game the Beams boys will be only the second pairing behind the Voss brothers to have reached the 50/100 game double.

In Queensland highlights from Round 8 selection on Thursday night:-

Tom Bell will return to the Lions side in Launceston after two weeks in the Reserves, while first-year player Jacob Allison was named among the emergencies for the first time. Archie Smith, too, is an emergency.

Zac Smith will return to the Geelong side to Essendon at the MCG on Saturday, and Kurt Tippett is set to do likewise for Sydney against North Melbourne at Etihad Stadium on Sunday.

Aliir Aliir, a late omission from the Swans side after he missed training, could not force his way into the side, while Corey Wagner, injured in the first few minutes of his first game of the season for North last week will miss 8-10 weeks following ankle surgery.

Sam Reid’s elevated standing at GWS was further evidenced when he was rushed straight back into the top side to play Collingwood in Sydney on Saturday after a one-week hamstring layoff.

And Rory Thompson and Jack Bowes are in line to play for Gold Coast in the historic China game against Port Adelaide on Sunday after being included in their extended match squad and travel party.

Thompson, injured since Round 3, and Bowes, omitted last week, are in line to join fellow Queenslanders Jarrod Harrow, Jesse Joyce, Brad Scheer and Charlie Dixon in the Shanghai game.

Scheer, who debuted last week, has also been named in the extended bench squad.