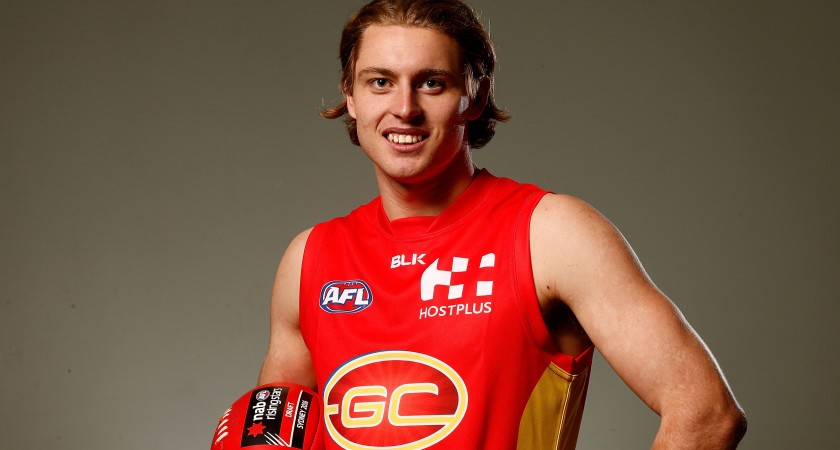 Scheer to debut for SUNS.

Friday 25 November 2016 was a long, long day for Brad Scheer, but a day he will never forget.

It was the day of the NAB AFL National Draft in Sydney, and the 18-year-old Gold Coaster was desperately hoping to join the Suns.

He watched as the club picked up four players in the first 10 picks.

Ben Ainsworth (Gippsland Power) went at #4 and Jack Scrimshaw (Sandringham Dragons) went at #7. Will Brodie (Murray Bushrangers) followed at #9 and at #10 the Suns picked up Cairns junior and Gold Coast Academy star Jack Bowes after the Sydney Swans had bid on him.

Scheer waited. And waited. And then for a couple of moments he went into a massive state of uncertainty.

At selection #67 Geelong announced they would draft the classy inside midfielder.

For the Perth-born Palm Beach Currumbin junior it was delight and devastation. He was in the AFL system but he was heading for Geelong.

Not that Geelong was a bad option, but Scheer had his heart set on joining the club where he’d been so comfortable for five years in the Academy.

He had one last hope via the AFL’s complicated bidding and points system which was in operation for the second year. Perhaps the Suns would match the Geelong bid.

A similar situation had unfolded for fellow Queenslanders Declan Watson and Josh Williams earlier in the Draft.

Watson, a Brisbane Lions Academy player, was drafted at #34 by North Melbourne. Brisbane could match the bid and claim him. They opted not to. He went to North.

Williams, a Townsville product and Suns Academy player, was taken at #36 by North. Gold Coast could match the bid and claim him. They opted not to. He went to North.

But after Geelong called out the name ‘Scheer’, just as North had done twice with Watson and Wilson, the Suns recruiting team huddled. Quickly they made a decision and matched the Cats’ offer.

This means the Suns had to sacrifice the equivalent points value of selection #67 to snare Scheer.

It’s a complicated system, especially for people outside the system, but to Scheer it was the sweetest process of all.

Ironically, four and a half months after he almost became a Geelong player, he will make his AFL debut for Gold Coast against Geelong.

Having missed the JLT Community Series due to a bout of pneumonia, Scheer was rewarded for a patch of good NEAFL form with selection for the Suns’ Round 7 clash with the Cats at Metricon Stadium on Saturday night.

Scheer, an emergency in Rounds 5-6,  had leap-frogged Scrimshaw and Brodie to become the Suns’ third AFL debutant of the season behind Bowes and Ainsworth, who played in Round 1.

Already contracted with the Suns for 12 months beyond the obligatory two years, he will be the 94th player overall and the 19th Queenslander to play for the club.

He will be third Queenslander to debut overall in the AFL this year behind Bowes and North Melbourne ruckman Braydon Preuss, and the 169th Queenslander overall to play in the AFL.

Also, he will be the fourth player to wear jumper #40 for the Suns behind fellow Queenslanders Tom Hickey and Andrew Boston, and Sean Lemmens, and the third Suns Academy graduate behind Jesse Joyce and Bowes.

Coach Eade said Scheer’s selection should be seen as a strong message to all AFL draftees and prospective draftees that where you get drafted is irrelevant once you get to an AFL club.

“You can be the No.1 pick or last rookie, you are all equal and that depends on your form, the way you go about it and your attitude,” he said.

“He (Scheer) has done the hard yards, worked hard and diligently. His form’s been terrific and he has probably put four or five really good games together so he has deserved his spot.

“We have every confidence he will acquit himself OK.”

Scheer’s AFL debut will be the next step in a football journey which began on the opposite side of the country.

As he explained in an article published on the AFLQ website prior the draft: “I was probably kicking the footy as soon as I was born, especially coming from Western Australia.

“I had no choice really, in a small country town in winter it’s AFL and in summer it’s cricket. It started in the backyard with my brother, and then I started playing Under 12’s when I was eight.”

He was a WA U12 representative but at that time his parents Joanne and David decided the best pathway for their son’s football was on the Gold Coast.

“I’m not sure I would have made it if we didn’t make the move to Queensland when I was 12. I obviously didn’t want to move away from friends but they thought it would be best for me. Mum taught me a lot about fitness, about being self-driven, and then Dad taught me everything about the game.

In 2014, when still only 15, Scheer made history at Palm Beach Currumbin as the club’s youngest ever senior player, although things didn’t quite go according to plan.

“To be the youngest ever to debut was incredible, but the game itself was probably one of my worst ones,” he recalled.

“My first kick at goal was on the final siren, but I was lucky enough that Crezza (coach Darryn Cresswell) gave me the chance to play the next week and I managed to kick five goals. I owe him for that second chance,” Scheer said.

That second game netted him a QAFL Rising Star nomination, an award he would win at the end of the season.

At U16 level he won the division two MVP award at the national championships, and after his 2015 campaign was heavily disrupted by injury he had a stellar 2016 season, playing well for the Queensland U18 side to earn a spot with the Allies for the division one matches and played regularly with the Suns in the NEAFL.

Scheer’s debut inclusion was the Queensland highlight of Round 7 selection on Thursday night.

In other news, Melbourne’s Josh Wagner, best afield in his VFL comeback last weekend following leg and thumb injuries in a disrupted pre-season, was included in the Demons’ senior squad and is tipped to play against Hawthorn at the MCG on Sunday.

Wagner, from Aspley, played 14 senior games in an outstanding debut season with Melbourne last year after coming off the rookie list, and signed a two-year contract extension over summer.

Brendan Whitecross could also find himself playing in the same game after he was included in Hawthorn’s extended squad in the wake of their shocking start to the season.

Sydney’s Aliir Aliir and Brisbane’s Tom Bell face a similar wait on final selection to learn whether they will return in the Sunday game at the SCG. Both were included in an extended interchange group as Lions captain Dayne Beams was ruled out with a thigh problem.

It is officially a two-week injury for Beams, who has started the season in spectacular form, but there are fears it could stretch significantly longer.

Geelong ruckman Zac Smith, not helped by an injury-disrupted start to the season, was a surprise omission from the side to play against his former club at Metricon, while Sam Reid was forced out of the GWS side with a bad hamstring.

Corey Wagner and Preuss were name as emergencies for North ahead of their clash with Adelaide in Hobart.