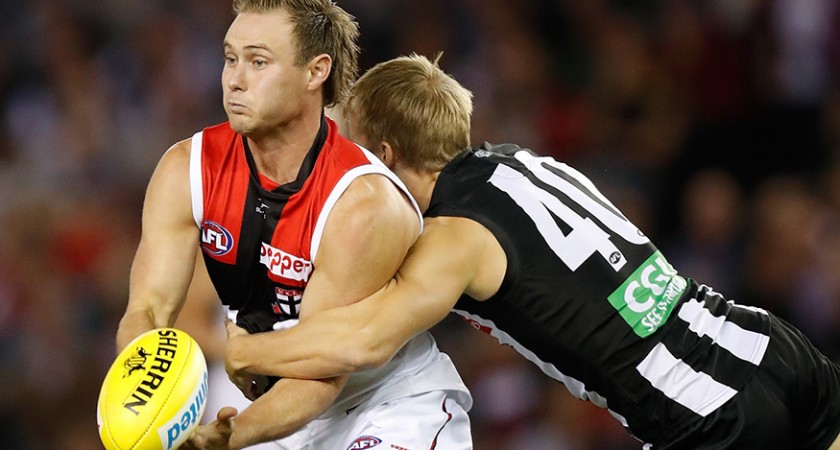 Three of the forgotten men of Queensland football have reached contrasting points in their AFL career this week.

Jesse White has retired, Shaun Hampson is set to make a long-awaited VFL comeback after a freak injury, and David Armitage has called a premature halt to a 2017 nightmare.

The trio are among the last survivors from the record-breaking Queensland Class of ’06, when no less than 18 players from the Sunshine Coast made their first entry to the AFL.

White called a halt yesterday after 11 years and 127 games with Sydney and Collingwood.

A promising basketballer in his youth and a Southport football product, White was part of the star-studded Queensland Class of 2006 when selected by the Swans with pick #79 in the 2006 AFL National Draft.

He debuted in 2008 and played 71 games including six finals for the Swans before he traded to Collingwood in exchange for pick #44 during the 2013 trade period.

He has played a further 56 games for Collingwood, but hasn’t played at senior level since Round 4 this year and unless he was to get a farewell game isn’t expected to play again.

The 29-year-old, also a talented designer and photographer and set to go into that field in retirement, has averaged more than a goal a game over his career, kicking 148 goals and sharing ruck and midfield duties when required.

White told the Collingwood website how the time felt right to hang up the boots and was thankful for his opportunity to play football at the top level.

“I’m really grateful for the time I’ve spent at both Collingwood and Sydney, the relationships I’ve built and the opportunities afforded to me while at both clubs,” he said.

“Having spent the last 11 years playing football professionally it’s strange for it to come to an end, but I’m really comfortable with my decision to wrap up my football career at the end of the season.

I’m looking forward to the future, spending time with my family and pursuing interests beyond the game.”

Collingwood coach Nathan Buckley praised White for his versatility. “Jesse talked to me a week or so ago about where he was at and the thing I noticed was how at ease with the decision he was,” Buckley said.

“In his mind it was time and it was clear to him, and me, that he was making the right call.

“Jesse has been a first class team-mate and someone who was always prepared to do what was asked of him. In his four years with us he played back, forward, ruck, wing, tall and small roles and always willingly. There is a lot of respect and warmth for Jesse at Collingwood and we wish him, along with his family, the best for the future.”

White is one of 10 Queenslanders who have played 50 games for two AFL clubs.

Hale is the only Queenslander to have played 100 games for two AFL clubs.

White kicked a career-best four goals in a game three times – for Sydney against Carlton in 2009 and Richmond in 2013, and for Collingwood against Gold Coast in 2015.

It was in the game against Richmond in 2013, when he also had 14 possessions in a 47-point Sydney win, that he earned his only Brownlow Medal vote.

Hampson, stranded on 98 AFL games since Round 23 at the end of his best season in the League in 2016, will finally return for Richmond in the VFL this weekend.

The partner of world-acclaimed model, fasion designer and actress Megan Gale, he hurt his back over the off-season lifting the couple’s first child out of a cot and has battled for eight months to get it right.

Having become engaged to his six-year partner on 20 July this year and looking forward to their second child in September, Hampson is contracted to Richmond for the 2018 season.

Armitage, contracted to St.Kilda until 2019, has had a similarly frustrating season due to recurring groin problems, and has only played at AFL level in Rounds 1 and 4.

He’s twice undergone surgery but after an unsuccessful VFL comeback on 22 July, he called a halt on the 2017 season this week.

In AFL selection news from Thursday night ahead of Round 21 of the Toyota AFL season, retiring Queensland great Nick Riewoldt was denied one of his farewell games when ruled out of the St.Kilda side to play Melbourne at the MCG on Sunday. He has not recovered from concussion.

Sam Gilbert has been named on an extended interchange bench and is tipped to return after a three-week injury lay-off, but Tom Hickey, also in the bench squad, is not expected to play unless coach Alan Richardson elects to play the specialist ruckman as a replacement for Riewoldt.

Josh Wagner was named among the extended Melbourne and with coach Simon Goodwin set to omit former No,1 draft pick after their bad loss to the Giants last week he is expected to get a run.

Josh Smith is named on the extended Collingwood interchange bench for Sunday’s clash with Port Adelaide in Adelaide, and Brendan Whitecross will walk the late selection tightrope ahead of Hawthorn’s Sunday clash with North Melbourne in Launceston.

Braydon Preuss retained his spot in the North side, while Josh Williams, a late inclusion last week, is among the Roos extended bench.

Wylie Buzza was dropped by Geelong for their huge clash with Richmond at Skilled Stadium on Saturday.