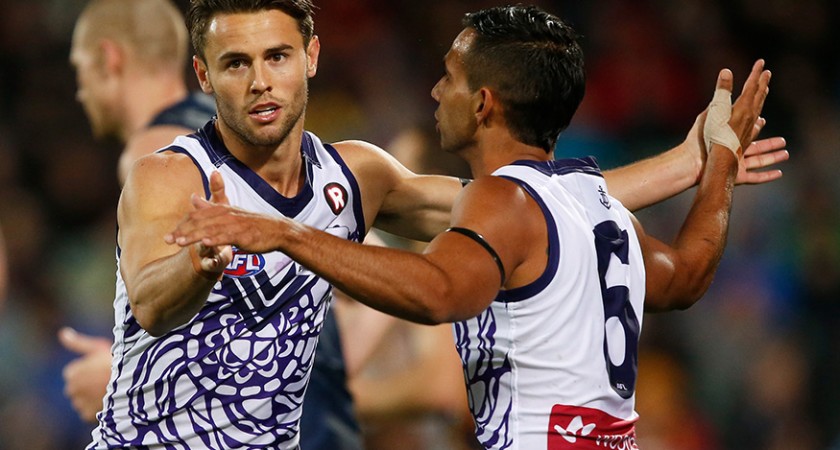 Lachie Weller experienced a contrasting high and low of epic proportions on Saturday night in arguably the best performance of his burgeoning career.

Weller, playing his 35th AFL game, had his first 30-possession game and suffered his first 100-point loss as Fremantle were hammered by Adelaide in Adelaide.

He had a team-high 30 touches to go with two goals, four marks, one clearance and four one-percenters.

The 21-year-old speedster, who hasn’t missed a game since Round 23 2015, topped his previous best possession count of 28 against GWS in Round 22 last year.

It was also just the third time he’s been a multiple goal-kicker.

Weller shared top billing among the Queenslanders in Round 10 of the Toyota AFL premiership with the ever-consistent Brisbane Lions pair of Dayne Zorko and Dayne Beams.

Zorko had an equal team-high 28 possessions, including 18 contested possessions – the second best haul in this key statistic in his 111-game career.

He also had a team-high 10 clearances, seven tackles and two goals to earn 130 Champion Data points.

It was his eight CD century of the season and the fifth time in 10 weeks he’s been the highest-ranked Queenslander.

Captain Beams was similarly good in the Lions’ big loss to Collingwood, leading his young side by example in exemplary fashion.

Archie Smith, playing his first AFL game of the year and his fourth overall, showed some really promising signs playing primarily as a forward to accommodate first-string ruckman Stefan Martin,.

Eric Hipwood did a couple of amazing things – a freakish high mark and a miraculous long goal – in his six possessions.

In the same game Josh Smith was among Collingwood’s best with 25 possessions, seven marks, three tackles and a brilliant long goal for 94 Champion Data points.

The good news story of Round 10 was Brendan Whitecross’ 100th game for Hawthorn.

After a career torn apart by injury he celebrated his milestone game with the Hawks’ shock win over Sydney Friday night. And he had 15 possessions, seven marks, two goals and 88 CD points.

It was the first time since Round 21 2013 Whitecross has been a multiple goal-kicker.

Sam Reid’s remarkable winning streak at GWS continued when the under-strength premiership favorites came from behind to upset West Coast in Perth Sunday.

Reid had 13 possessions as he celebrated his 14th win in a row.

Sam Gilbert had 20 possessions and 93 Champion Data points in St.Kilda’s loss to the Western Bulldogs, while Josh Wagner collected 13 possessions in Melbourne’s win over Gold Coast in Alice Springs.