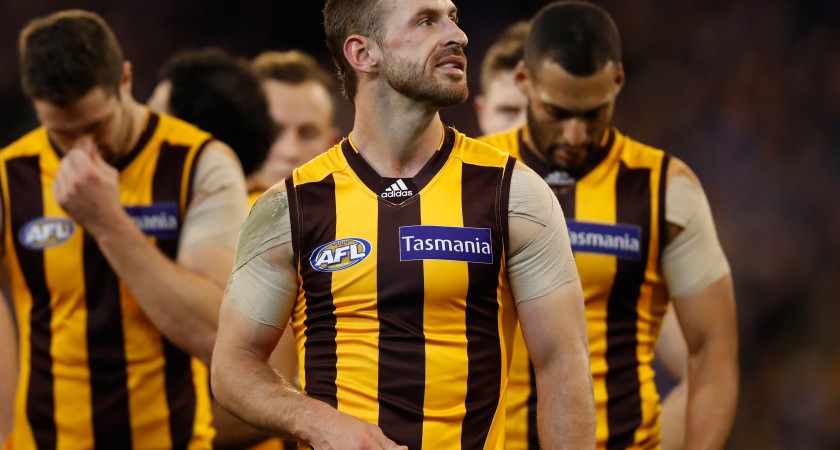 If Brendan Whitecross wanted to wallow in self-pity he’d look at his AFL games tally at birthday time each year and think how harsh the football gods have been on him.

When he celebrated his 20th birthday on 25 January 2010 the former Kedron junior and Windsor-Zillmere senior player had already played 13 games for Hawthorn.

Twice a victim of severe knee injuries in the finals, he played 72 of a possible 93 games from his debut in Round 1 2009 and has played 29 of a possible 109 since then.

A career that could have given him three premierships during the Hawks’ golden era had it not been for two knee reconstructions has been a source of incredible frustration.

But at least when he celebrates his 28th birthday next January Whitecross will have the satisfaction of joining the Queensland 100 Club.

He will play his 100th game for Hawthorn against Sydney at the SCG tonight becoming the 45th Queenslander to reach triple figures.

Whitecross also will be the fifth Queenslander to play 100 games for Hawthorn behind Dunstall, Hale (108) Lawrence and Osborne.

Whitecross, described on the Hawks’ website today as “one of the most popular players amongst Hawthorn fans for his resilience and reliability”, was drafted with selection #29 in the 2007 AFL National Draft.

In his 10th season at the club, Whitecross signed a two-year contract extension at the end of last year after interest from Brisbane after his long-time Hawthorn mentor Chris Fagan was appointed senior coach at the Gabba.

Ironically, if he had been lured home it would have filled a curious void in his career.

Despite such a long time in the League Whitecross has never played at the Gabba.

Also, he has never lost a match against the Lions.

Whitecross will share the milestone spotlight tonight with 150-gamer Luke Breust, a four-time premiership player who was drafted by Hawthorn 13 months after Whitecross via the rookie list.

The Whitecross selection was one of two Queensland highlights ahead of Round 10.

The other is the pending inclusion of 21-year-old ruckman Archie Smith for his fourth AFL game and his first game of the year.

Smith was named on an extended bench squad for Sunday’s MCG clash with Collingwood and after a rich vein of form in the NEAFL and an extended stint playing forward last week to expand his potential role he is tipped to play.

Tom Bell was omitted for the second time this year, while the desperately unlucky Claye Beams will miss with a hamstring injury.

North ruckman Braydon Preuss was included in their extended bench squad for their Sunday clash with Carlton at Etihad Stadium but after the Roos’ brave win over Melbourne last week he is not expected to get a start.

St.Kilda’s Nick Riewoldt will miss his side’s clash with the Western Bulldogs at Etihad on Saturday, and illness will keep Jack Bowes out of the Gold Coast Suns’ game against Melbourne in Alice Springs on Saturday evening.

Aliir Aliir again missed out on the Sydney side to play Hawthorn. He is an emergency.

Already in Round 10 Dixon and Smith played important roles in Geelong’s last-gasp win over Port Adelaide at Geelong.,

Dixon, involved in a controversial incident in the dying minutes when he was ruled to have taken too long before taking a set shot at goal, had 13 possessions (nine contested), seven marks (three contested), three tackles, one goal and two goal assists for Port.

In other news out of Collingwood, luckless Queenslander Adam Oxley has undergone groin surgery and is not expected to play again this season. He has been plagued by problems in recent months and the club opted to take a long-term view to ensure he is fit for a full pre-season.