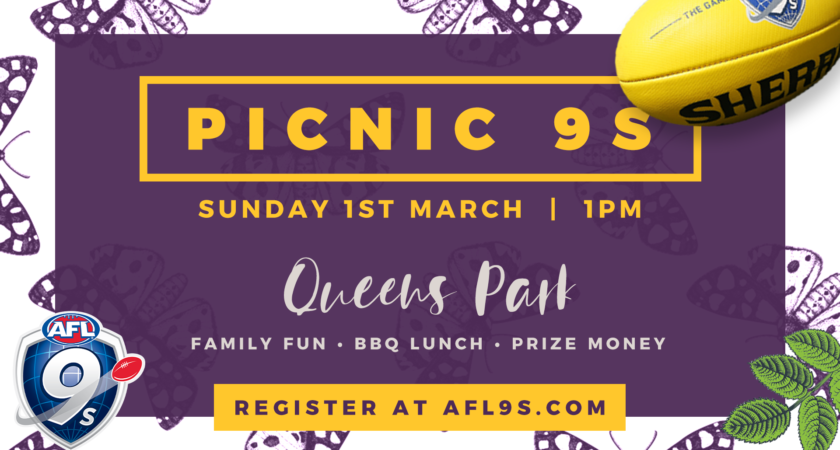 For the second year, Toowoomba’s iconic Queens Park will play host to a round-robin style AFL9s competition on Sunday, March 1st with participating teams competing for a bucketload of prize money.

AFL Darling Downs Regional Manager, Jeff Neumann, said the inaugural Picnic Nines event was extremely successful and we believe 2020, will be bigger and better than ever with two new divisions – max and mellow!

“It’s our touch footy version of the game and there’s no better place to have it than Queens Park,” Neumann said.

Toowoomba is known as the garden city, therefore, we wanted to join both the gardens and AFL 9s into one concept, hence Picnic 9s was born.

“There is that social aspect, but at the end of the day the winner does take home some prize money.”

Neumann said the modified version of the game was a way to get those keen to try out the sport involved.

“It’s social, fun and active, and is for males and females aged 14 years and up.

“We’re targeting the family sort of atmosphere, and it’s a way to bring those who haven’t played much football at all into the game.

“It takes out the physical side and is a whole heap of fun. Men and women, boys and girls have played throughout and always gone home with a smile on their face.”

The socialising extends beyond the field too with a free barbeque, Kids’ inflatable fun zone and appearance from Roy the Lion all available throughout the day.

For more media opportunities and information regarding the Picnic Nines, please contact Jeff Neumann at Jeff.Neumann@afl.com.au