Academy Ace gets his chance to shine 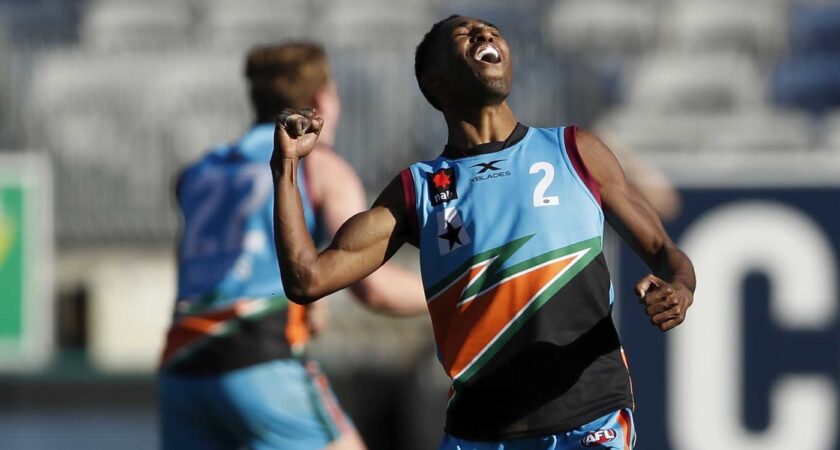 The Gold Coast SUNS today announced the promotion of International Scholarship holder Hewago Paul Oea to the club’s Rookie List (Category B) for the 2021 season.

Affectionately known as Ace, the 19-year-old is a talented footballer who originates from Papua New Guinea (Gulf/Central – PNG).

“Ace has displayed significant improvement since coming to the club as a 16-year-old and we’re proud to see him progress onto the club’s list,” SUNS GM – Football Operations Jon Haines said.

“He is a terrific young man, with an outstanding appetite to learn and work hard. Ace’s development is a credit to his family, AFL PNG, and most importantly himself.

“Ace made a difficult decision to leave his family in PNG to follow his dream and his progression onto the list is an acknowledgment that his dedication and commitment is beginning to show real dividends.”

Hailing from Gordons, a suburb in Port Moresby, Ace first started playing football when he was 12 in the EmNau Niukick community competition and played senior football with the Gordons Kokofas.

It was at this tournament where AFL South Pacific Development Manager, Ben Drew, first saw him in action, and together they guided the young talent through the next chapter of his journey.

Shortly after he joined the AFL PNG Talent Academy which saw him represent his country from ages 13-16 at the annual Queensland Under-14 and Under-16 State Championships.

In 2017, when he was 15, Ace played in the AFL International Cup for the PNG open men’s side and won best-on-ground in the Grand Final against New Zealand. He was coached in that team by now SUNS AFLW Head Coach David Lake.

At 16 he joined the SUNS Academy and was involved in the AFL Queensland talent program, before earning selection in the national NAB AFL Academy program (the first-ever PNG player to do so).

In 2018, Ace was granted an International Scholarship with the SUNS which saw him train and play with the reserves team while continuing to develop in an elite environment, earning a NEAFL Rising Star nomination in 2019.

“I love playing football for the Gold Coast SUNS and I am very excited to continue my career here,” Ace said.

“I want to thank all my family back in PNG for believing in me, AFL PNG for everything they’ve done and my Gold Coast family Kris and Tim Searl who have supported me with my dream.

“I love all the boys at the SUNS, they are very welcoming, and I can’t wait to get back into training at the club.”