ABEY WILL KEEP KICKING ON 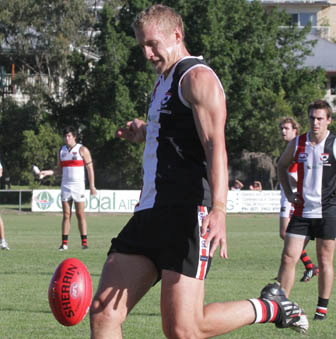 The best centre-half-forward in the QAFL for a sustained period of time joins the exclusive club of Morningside 150-gamers at Esplen Oval on Saturday.

Kent Abey is one of the Panthers champions who has been a pillar on which Morningside’s success has been built since 2004.

He will celebrate the milestone against Broadbeach, who appropriately engaged in some fierce finals battles when Abey arrived back at Morningside for his second playing stint.

“When I first came up here (from Tasmania), Broadbeach were a lot stronger,” he said. “We had a couple of close finals when Korey Fulton was going really well, James Drake was around, and they had a lot of other good players too.

“We have to be ready because they’ve got some really good young players coming through now, but it is nice to be playing game at home.”

Abey, 28, is hoping for a better result than his 100th game, when he was best afield with seven goals against a super-strong Brisbane Lions outfit at Giffin Park, but lost by a point.

“We were 40 points down at quarter-time where there was a howling breeze – I think 25 of the 28 goals were kicked at one end,” he remembered. “Still, we’ve had a pretty good win-loss ratio over the last seven years and I can’t complain.”

Abey has kicked more than 300 goals for the Panthers, despite playing in the toughest position on the ground.

He led the club goalkicking in 2005 and 2008, but consistently posts around the 50-goal mark every year. He is on target again in 2010, sitting in sixth place on the goalkicking table with 36 majors.

There was a heavy reliance on Abey to kick goals in the past, although the Panthers now have more balance with Austin Lucy alongside him and Shaun Mugavin back in the goalsquare.

“My role changes from week to week now depending on the ground and the opposition as to whether I push right up the ground, play deep or mix it up,” Abey said. “There was probably an unhealthy amount of ball kicked to me (at one time in the past) and if it only comes half the time but we’re winning, I’m happy to take it.”

Such has been the strength of the Panthers outfit that Abey is yet to win a club best and fairest, finishing runner-up in the Devery-Kelly Medal in 2006 and 2007 and third in 2008.

The journey so far has produced three highlights which stand out – the 2004 and 2009 premierships, and the historic State game in Launceston where Abey’s 5.1 piloted the Maroons to a stunning 11-point victory and earned him the Zane Taylor Medal.

He was rewarded with the club co-captaincy last season, a role he has relished.

“It was always going to be hard shoes to fill after Tangles (David Lillico) and it is a huge responsibility at such a prestigious club,” Abey said. “It was great to have the opportunity to share it with Goughy (Jacob Gough) and we both bring different strengths. I have thoroughly enjoyed it.”

The good news for Panthers fans is that Abey, who has done an impressive job as assistant coach to Rob Amos with the South East Bushrangers for the past three years, is keen to go well past 150 games.

“It’s a nice little achievement but 200 is the number I am aiming at,” he said. “I’ve got every intention of playing on for the next 2-3 years and we’ve got some good young guys around who are motivating me to play on, he said.”