A year in the life of a Multicultural Ambassador 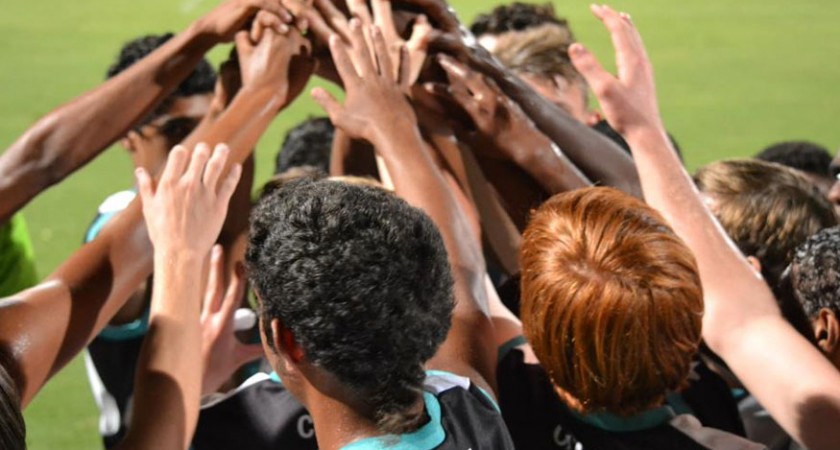 The New Year arrives with the tingling sensations of a new footy season. But somehow, this year was even more… tingly. With the first ball being bounced  in April, something more exciting preceded it. Would I be successful in my bid to be a Multicultural Community Ambassador for the AFL in 2015?

A flurry of emails and letters in the mail heralds the news. I have been successful. For at least a year I have a chance to play a role for the AFL in spreading the message of a multicultural future for the game. So, was that the biggest challenge over? Selection? Far from it. Now the hard work would begin.

Every ambassador has their own unique set of circumstances, whether that be based on geography, cultural links, employment or any other personal factors. As it happened, my own successful application coincided with the 2015 National Diversity Cup in Cairns. Being a local, and frequent occupant of the hallowed Cazalys Stadium with junior footy up here, it was a great chance to play a role. My first duty as an ambassador was as part of the AFL Diversity media team, writing accounts of the Kickstart and All Nations Under 15 competitions for the AFL website and AFL Queensland.

It was such a privilege to get to work with the AFL Diversity crew as well as past great AFL/VFL players. I felt a part of a wonderful “footy” team, but also felt that I was doing something significant and useful.

The next step was last weekend, the Indigenous Round.  Through consultation with the Diversity team at AFL Queensland, and the crew at AFL Cairns, I was able to attend most junior and some senior fixtures and give a pre-game address to all players on all teams about the meaning of the Indigenous Round and the values associated with the concept. To have all players riveted and prepared to run out onto the field with a greater feeling of unity and brotherhood was special.

To have the two senior women’s teams lined up on the playing field, under lights at Trinity Beach, listening to our addresses was an experience I will cherish for a good while.

But now comes the follow up. To date I have simply scratched the surface. I have more to do in a relatively short period of time – season’s end effectively – and must get cracking.

One early task for me was a plan. This role is not a ramshackle affair where whims and fancies dictate the next task. A set of goals was necessary to guide what to do, when to do it, what resources would be needed, which people should be liaised with, where events would be held and many other considerations.

In short, the next few months here in Cairns will be crowded for this little ambassador.

First cab off the rank is the opening of the local footy club’s new changing room facilities in Gordonvale. On a day where the Pyramid Power club will celebrate a new milestone in their own history, the opportunity has also been presented to invite the local Indian communities down for a “come and see” day of a home fixture, community events and other activities. It is a chance to further expand the uptake of the game to Indian families and kids and add a new multicultural dimension to a club that is already highly diversified culturally – especially with a 90% indigenous make-up of players.

A series of presentations to local boarding schools and establishments will follow. With a speech and slideshow in hand I have the chance to address AFL Cape York Academy, Mount St Bernard’s College and Djarragun Indigenous College. The theme is the multicultural future of the game and what they themselves can bring to that future. All have high or exclusive indigenous student numbers, meaning they already contribute enormously to the multicultural framework in the north. This presentation simply adds further clarity to the roles they already play and the gifts they already bring to the game.

Opportunities exist to work closely with the local African communities across Cairns over the upcoming Round 14 fixture between the Gold Coast Suns and the Western Bulldogs, and again in Round 19 when the AFL celebrates its Multicultural Round. It is another opportunity to address local teams – especially juniors – of the importance of the round through a nationwide multicultural lens.

More ideas and opportunities will present themselves – and I haven’t even left Cairns yet! It goes to show how many opportunities can be generated with enough planning and commitment.

It is beginning to look like I may need to apply for a second year as an ambassador just to ensure I can finish everything I start.

But that I would embrace with open arms. It has already been a very special journey as an AFL Multicultural Community Ambassador, and I suspect that journey will just keep getting better and better.