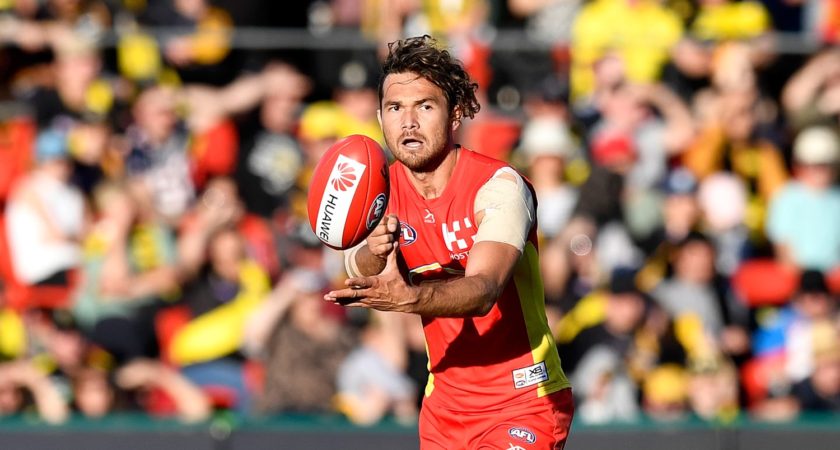 Queenslanders have scored an historic double win in the Brisbane Lions and Gold Coast Suns club championship awards, and dominated the leaderboard at both clubs.

And at the Suns, Queensland stalwart Jarrod Harbrow won the club’s premier individual award for the first time in a count in which Lachie Weller was third, Rory Thompson fourth and Alex Sexton fifth.

Seven Queenslanders in the top 10 of the two Queensland clubs is a record since the Suns joined the AFL in 2011, surpassing the five of last year when  Zorko, Beams, Andrews and Eric Hipwood finished first, second, eighth and tenth at the Lions and Harbrow was seventh at the SUNS.

Zorko’s fourth B&F win sees him behind only five-time winner Michael Voss for representation on the club championship Honour Board since the formation of the Brisbane Bears in 1987, and has seen him slip one win ahead of champions Simon Black and Jonathan Brown.

His seven top 10 finishes sees him rank third among Queenslanders at the club behind only Voss (11) and Marcus Ashcroft (9) and ahead of Jason Akermanis (6), Scott McIvor (6) and Mal Michael (6).

Andrews, now with four top 10 finishes in four seasons, is next best, ahead of Beams (3) and Daniel Merrett (3).

In a snapshot summary of the Queenslanders at the two Queensland clubs:-

Having been elevated to the captaincy in Round 2, he also led the Lions in tackles and inside 50s, was third behind Beams and Stefan Martin in clearances and contested possessions, and equal third in goal assists.

Dayne Beams, pipped by one vote by Zorko for his second Merrett Murray Medal, played 21 games in a tough personal year following the death of his father in March. And after handing over the captaincy he did well enough to win a spot in the All-Australian squad and be desperately unlucky to miss the final team.

Still, the ever-reliable fullback, elevated to the vice-captaincy under Zorko when Beams stepped aside, averaged 15.6 disposals, made a club record 205 one-percenters to rank second in the League behind Port Adelaide’s Dougal Howard.

Among other Queenslanders at the Lions, Eric Hipwood played every game and kicked a personal best 37 goals, seven up from last year, including a career-best six goals in the Round 16 Gabba win over Carlton.

Charlie Cameron, after being traded home from Adelaide over the off-season, led the club champion vote-count early before injury ended his season at Round 11.  He kicked 17 goals in 11 games.

Also at the Lions, TV reality show winner turned AFL debutant Matt Eagles played four games mid-season before he was cut down by injury, and did enough to earn a 2019 contract. Others to play at AFL level were Jacob Allison (three), Ben Keays (two) and Tom Bell (one).

At the Gold Coast, Jarrod Harbrow was the runaway big story in a season in which the former Cairns junior and Western Bulldogs flyer also won the Suns Community Award, plus life membership, and signed a two-year contract extension.

Averaging 21.59 possessions through 22 games and generating enormous drive off half back, he posted his seventh top 10 finish in the Suns B&F and finally broke through for the top award after being runner-up to Tom Lynch in 2016.

Only Gary Ablett has finished top 10 more often at the Suns than 30-year-old Harbrow, who played 70 AFL games with the Bulldogs from 2007-10 and finished sixth in the Dogs B&F in 2009.

Also at the Suns, Lachie Weller, traded home from Fremantle over the summer, played all 22 games for the third year in a row and will take a 67-game unbroken stretch into 2019.

Alex Sexton, in his seventh season and now with 97 games behind him, played all 22 games for the season and topped the club goal-kicking with 28 after his previous in a season was 13 in 2016.

He got himself on the goalscoring sheet 15 times, including a career-best five goals against Melbourne in Round 20, averaged 13.6 possessions and had a career-best 51 tackles.

He also won the Suns ‘Most Improved Player’ award after finishing eighth in the best and fairest in 2016.

Rory Thompson played 17 of the first 18 games in his eighth season with the club before injury cut short his campaign.

Still, there were two big highlights – in Round 16 he became the 12th player overall and the second Queenslander behind Harbrow to play 100 games for the club, and in Round 18 he held Buddy Franklin goalless in the Suns’ stunning SCG win over the Sydney Swans.

With Tom Lynch’s pending departure, Thompson is one of six foundation Suns players still at the club alongside Harbrow, Michael Rischitelli, who has recently confirmed he will play on next year, Steven May, David Swallow and Tom Nicholls, who hasn’t played an AFL game since 2016.

His fourth placing in the B&F followed an identical finish in 2013.

Also at the Suns, Jack Bowes played 16 games and averaged 16.2 possessions in his second season to stamp himself as a star of the future, while  Brayden Crossley (ten games), Jacob Heron (eight) and Jacob Dawson (three) made their AFL debut, and Brad Scheer (six) added to his four games of 2017.

Max Spencer played three games in 2018 after five games in 2017 but was delisted by the club shortly after the last game.