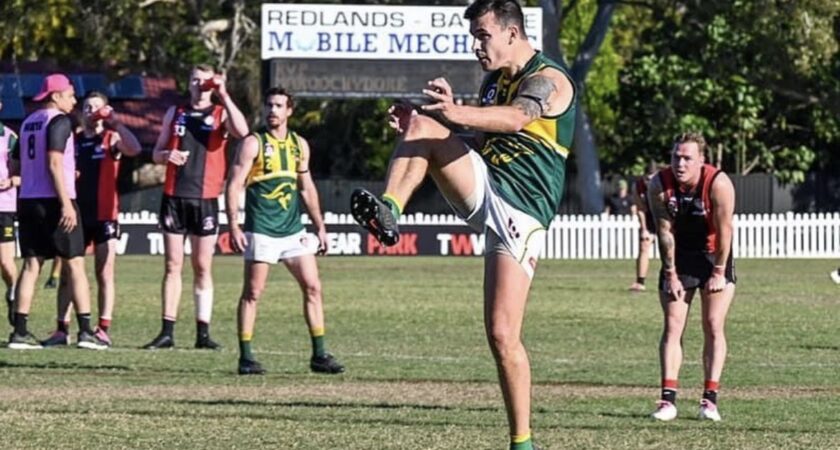 After trailing by as much as 20-points late in the third term, Scholard ended a goal-less streak from the Roos that spanded more than 60-minutes of play that sparked a rampage of goals and ultimately set up a thrilling win.

COVID denied the Sharks and Roos of their first meeting of the season when the game had a force cancellation on the day of the match back in July. No-one knew at the time that it would ultimately postpone the meeting between the pair, with the footy gods announcing that it was a match-up too good for a home and away fixture, and instead more deserving of a finals’ eliminator.

Redland-Victoria Point had enjoyed a stellar season and were perhaps the silent assassin of the competition as it worked its way into third position on the ladder, and with some remarkable wins against top six teams.

Maroochydore had enjoyed an impressive year but had question marks on whether it was capable of beating top six teams after securing just one victory against those teams in season 2020.

With form from one team and question marks from the other who had a point to prove, it set up a dream clash between two teams that would leave nothing to chance.

With the ground bathed in sunshine and a slight breeze favouring the club rooms end, the stage was set.

The Sharks had the honours of kicking with the breeze and burst out of the blocks quickly with a number of inside 50s. Johnson looked impressive across the wing and Huddy inserted his dominance in the ruck from the outset.

Maroochydore responded to the early challenge with three goals from three inside 50s from three set shots in three-minutes to open up a handy buffer 9.5-minutes into the game and an 18-point lead. Captain Josh Govan was at his best while Stone and Filo worked well between the arcs.

Mitch Scholard impressed with two of those three goals from telling marks, fresh after turning 30 the previous day. He had the tough job on Sharks’ co-captain Mitch Stallard.

The Sharks had its bright spark shining as Adrian Williams stopped plenty of attacking thrusts from the Roos; winning plenty of the ball and taking strong marks.

Lachlan McDonald powered through from half forward to half back to win some crucial contested ball and set up a few scoring chances.

The Sharks gathered control of the match with three goals to lead at quarter-time.

The second quarter resembled a battle field. Disposals were often won in contested situations; tackles were laid with little to no prior opportunity and marks were earned with great pressure applied.

Adrian Williams kicked 35 goals for Victoria Point in the QFA last year and found himself on the end of his first goal of 2021 on the back of a 50-metre penalty in what was the only goal of the term.

Lachlan McDonald lifted to start the second half with the Sharks down to two fit players on the bench. He kicked a big-time goal to continue the stretch of five-answered goals.

Scholard ended a streak of more than 60-minutes between goals for the Roos with a pair of goals either side of time-on.

Yagmoor responded immediately for the Sharks when he pulled the trigger from beyond 50 to restore order and a 1.5 goal buffer.

When Tom Matthews bagged a pair of team-lifting goals for Redland-Victoria Point to blow the lead out to 20-points, the game looked just about over.

Aaron Christiensen came off second best in a tough contest late in the term and the Sharks were down to 19 fit men.

The final stage was set and the final term needed a spark from somewhere. Enter Lachlan Robinson for the Roos who had his influence limited by key defender Tom Salter all day.

Robinson made the most of a Salter error in their contest at half forward and found himself on a loose ball that resulted in a classy snap around the body in the opening minute and the sixth-placed Roos were back in business.

With Christiensen returning to the field, the Sharks were back to 20 fit men but the toll of the physical contest showed.

Maroochydore knocked up getting plenty of the ball inside the forward 50 as the goals started to tumble. When Scholard kicked his sixth from a crumbing effort at the 14.5-minute mark, it pushed to just under two goals ahead.

He kicked his seventh and final goal of the day just before time on to open up a lead of more than two goals. Scholard was having the 30th celebration of a life-time where his six set shots on goal went straight through the middle each time.

There was still more twists to come as Matt Warren and Jacob Murphy ignited at half-forward. Quick goals from Warren and Huddy closed the gap to less than a kick.

With the Sharks desperate for an historic win, Jacka and Kethro executed some inspiring efforts for the Roos to deny their opponents the lead.

The siren sounded with the ball in the hands of Ben Sloan who sealed the 10-point win after the siren to cap off one of the great games of QAFL football seen in recent years.

Chris Yeend provided the commentary for the QAFL Live Stream of the match between Redland-Victoria Point and Maroochydore.
Watch the replay – https://youtu.be/8_1fL_Q3q1I