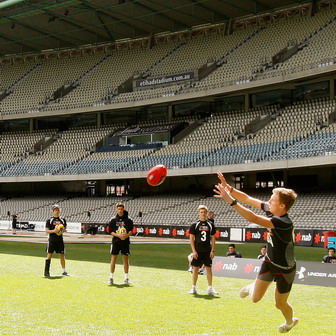 Seven Queenslanders were put through their paces in the State Draft Combine Testing at Etihad Stadium on Saturday.

The combine is the state group test for young footballers aspiring to be picked in November’s 2012 NAB AFL Draft, on Thursday November 22 on the Gold Coast.

Highlights of the testing included Tom Fields 20 metre sprint time of 2.85 secs – which would have registered in the top 3 tests conducted in the preceding week at the National Draft combine testing – and the great endurance running from Blake Grewar, Josh Smith and Scott Clouston in the Shuttle Run (Beep Test) who all recorded 14.2.

Blake Grewar was unable to perform all the tests on the day due to an ankle injury that he incurred in last month’s NEAFL  v Gold Coast SUNS elimination final. His effort to run a 14.2 beep under such discomfort was a very gutsy performance.

The top 3 performances on each of the tests were:

Results on the Vertical Jump and Repeat Sprint were unavailable