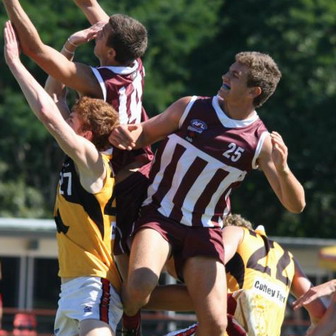 Four Queenslanders have been named amongst 62 of the nation’s best young footballers to be included in the sixteenth AIS-AFL Academy intake.

This is the second intake of the expanded two-tier model. All players will receive an Australian Institute of Sport scholarship.

Lachlan Weller (Broadbeach), Liam Dawson (Redcliffe) and Matthew Hammelmann (Morningside) have been named in the 32 man Level One squad who were selected from the recent NAB AFL Under-16 Championships that were held in Sydney.

They will be coached by AFL Engagement and Talent Coordinator Chris Johnson. The squad of 30 will tour New Zealand in January.

Noosa’s Cain Tickner has been selected in the Level 2 squad for players who turn 18 during 2013 and will be eligible to be drafted. The squad of 32 will be managed by AIS-AFL Academy High Performance Coach Michael O’Loughlin and will return to Europe in April 2013.

“The AIS-AFL Academy’s two-tiered model allows the players to receive specific high-performance training and guidance as they prepare for the prospect of joining an AFL list.

“The program is not only about on-field skills. Players are exposed to industry-best practice in areas such as nutrition and recovery while the opportunity to travel and experience our game on the international stage is unique to the AIS-AFL program,” he said.

Acting AIS Director Phil Borgeaud said the AIS is proud of its record and tradition of partnering with sports to develop talented young athletes.

“The AIS-AFL Academy has produced many talented players who have gone on to excel at the elite level of the game and  I am confident this will continue in the future.

‘The Australian Government is committed to increasing participation in the AFL at the grassroots level, providing almost $1 million in participation funding annually,” Mr Borgeaud said.

The AIS-AFL Academy is part of a commitment made by the AFL and the Australian Sports Commission, through the Australian Institute of Sport, to support Australian football’s best young players with their football and education development.

The squad will take part in a non-residential program allowing scholarship holders to remain at home to complete their secondary schooling.

Both squads will conduct their first camps in Melbourne during Toyota AFL Grand Final Week.