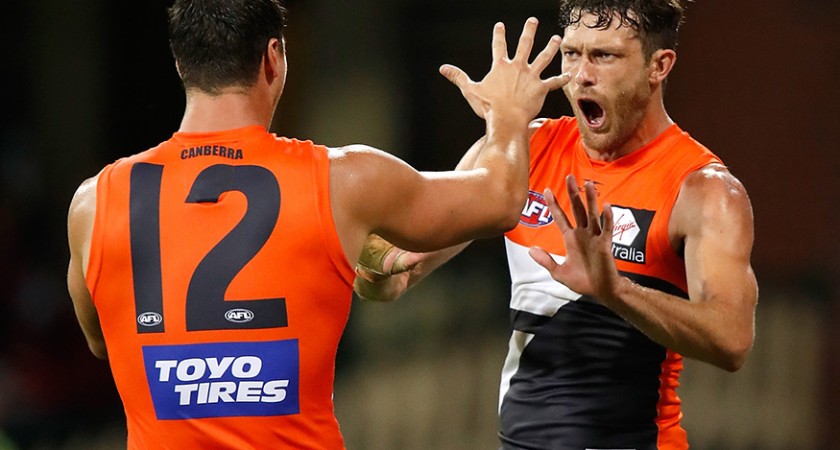 If GWS Giants coach Leon Cameron sat down and privately ranked his talent-laden playing list from 1-44 the odds are that Queenslander Sam Reid wouldn’t be in the top 22. Not even close.

But as the 2017 premiership favorites prepare to take on the 2016 premiers tonight in Round 6 of the Toyota AFL premiership Reid will be in the thick of things as he continues an extraordinary second life in League football.

It will be big moment for the Giants and football in Giants territory.

And it will be potentially a massively satisfying moment for 27-year-old Reid as his plays his 35th AFL game and his third against his former club.

For only the second time in his 10-year AFL career the former Sunshine Coaster will play five AFL games in a row. He did likewise when he played Rounds 3-4-5-6-7 in 2013.

It’s been a remarkable rejuvenation for the bearded half forward, who was originally drafted by the Bulldogs at #35 in the 2007 AFL National Draft and played 10 games with the Dogs from 2008-11.

He was a foundation signing with the Giants, heading north in what some media cynics described as the ‘steak knives’ in the key signing of best mate and Giants co-captain Callan Ward.

It seemed that would be the end of the journey for Reid, who was told by incoming coach Cameron that he may struggle for opportunities in the young expansion club and was de-listed.

A chronic diabetic who had endured four shoulder reconstructions in six years in the AFL, Reid retired as an AFL player and accepted a development coaching role with the Giants.

He took on the midfield responsibilities role while playing in the Giants’ NEAFL side in 2014, and captained the NEAFL team while filling a similar role in 2015.

He was well down the coaching track and quite content with his lot when, at the end of ’15, coach Cameron asked him to consider a senior playing comeback.

There were no guarantees from Cameron – just an opportunity.

Reid didn’t need to think twice, and re-joined the playing list via the 2016 rookie draft.

When he played his 15th Giants game and his 25th game overall in Round 12 2016 against cross-town rivals Sydney it was 1072 days after his previous game.

So ‘new’ was his career that he’d even taken on a new jumper number.

After wearing #23 for the Giants in 2012-13 he switched to #50 for one of the great comebacks, and what was his first win in a Giants jumper after 14 consecutive losses.

He played Rounds 12-13-17-18-19-20 last year – all wins – but missed selection for the Giants’ first finals campaign, and again there were many who thought that was it.

Even in the AFL Guide 2017, where he is included as a rookie list player, it says in his short profile “will struggle for regular opportunities”.

But after missing selection for the Giants’ hefty loss to the Adelaide Crows in Round 1 he’s played in four consecutive wins over Gold Coast, North Melbourne, Port Adelaide and Sydney.

With at least one goal in four consecutive games for the first time in his career, Reid has kicked 6-6. His 12 scoring shots is fourth most for the Giants behind only Cameron (26), Greene (25) and Steve Johnson (13).

So tonight he’ll be chasing his first win against his former club and his 10th consecutive win overall as he looks to further consolidate his place in the senior line-up.

Reid’ retention in the Giants side for the historic Friday night blockbuster was one half of the good news for Queensland football to emerge from Thursday night selection for Round 6.

The other half was the return of Josh Smith to the Collingwood side after he was dumped for Tuesday’s Anzac Day clash with Essendon.

Smith had played 22 games in a row after debuting in the Anzac Day game last year before his surprise axing.

But the Pies’ had only just lost to the Bombers on Tuesday when coach Nathan Buckley confirmed Smith’s recall in his post-game media conference. He’ll play against Geelong at the MCG on Sunday.

North Melbourne ruckman Braydon Preuss wasn’t so lucky. After being “rested” in Round 5 he missed a recall as the Roos chase their first win of the season against the Gold Coast Suns at Etihad Stadium on Saturday night.

Preuss, who played Rounds 1-2-3, was named as a North emergency alongside fellow Queenslander and Round 3-4-5 emergency Corey Wagner.

In the only other significant Queensland selection news, Liam Dawson was omitted from the Brisbane Lions side that will host Port Adelaide at the Gabba on Saturday afternoon.

Brad Scheer was named among the Gold Coast emergencies for the second time in a row.

Jake Spencer’s worst fears were confirmed at Melbourne following news he will require collarbone surgery and will miss a minimum six weeks after being injured in the Demons’ Anzac Day Eve clash with Richmond.