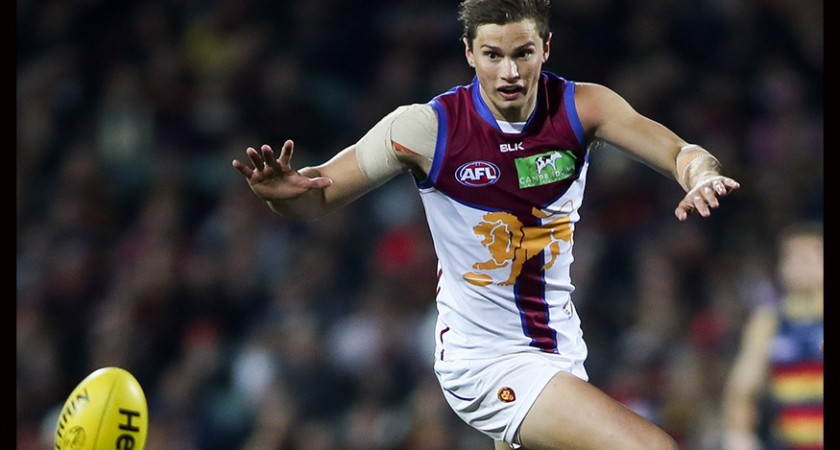 It’s a fickle business being a young player trying to establish a career in the AFL. Especially tough is selection night each week. Just ask Brisbane Lions’ player Liam Dawson.

Inevitably team announcement each week is very good news or very bad. There’s no in between.

For 21-year-old Dawson it has been a real a roller-coaster.

In his third year at the Gabba, the former Aspley junior has played 22 senior games.

In his first two years he was promoted to the senior team five times and dropped five times.

Last night for Dawson it was good news again. He was promoted for the sixth time for Saturday’s Etihad Stadium clash with the Western Bulldogs, when popular Dogs skipper Bob Murphy will play his 300th game.

Dawson was rewarded for a best afield performance in the Lions Reserves against Southport last weekend, when he had 31 disposals, 17 marks, seven inside 50s and six rebound 50s.

He’ll play his first game of 2017 in the extended Round 5 of the Toyota AFL premiership, which goes right through to the traditional Anzac Day clash between Collingwood and Essendon on Tuesday.

Dawson’s inclusion was the good news for Queenslanders.

So, too, was the confirmed return from injury of Swans ace Kurt Tippett for the Sydney derby against the GWS Giants at the SCG Saturday night.

Not so good was the omission of Tom Bell from the Lions side and Aliir Aliir from the Sydney side, and a groin injury that has forced David Armitage out of the St.Kilda side and could see him sidelined for an extended period.

Armitage pulled up sore following last Sunday’s round four win over Collingwood, and coach Alan Richardson said while the 28-year-old would definitely miss Sunday’s clash with Geelong at Etihad, there’s a possibility he could be sidelined for much longer.

“He’s still pulling up really sore after games, he’ll have to have some tests,” Richardson said today. “It looks like he’ll miss a bit of footy, unfortunately.

“It looks like he’s going need to possibly have corrective surgery, but if not, at least an extended rest to make sure we get it right.”

Ruckman Tom Hickey, too, will miss for St.Kilda this week, and what would have been a reunion with former Gold Coast teammate Zac Smith, now at Geelong.

Officially Hickey is listed as ‘managed’, but coach Richardson conceded he would have been dropped even though he “pulled up stiff” from last week’s game.

“We would have made the change, we think we’ve been on the back foot too much at stoppages, ” Richardson said. “We think ‘Hick’ has some room to move there in terms of being better for us in the ruck.”

The Queensland representation in Round 5 will be further depleted by North Melbourne’s decision to rest young ruckman Braydon Preuss after his impressive start to the season.

The Roos, chasing their first win, will play Todd Goldstein one-out in the ruck against Fremantle’s Aaron Sandilands in Perth on Saturday night.

Corey Wagner has been named in the North emergencies for the third week in a row and will travel to Perth as the standby player.

Dixon will play against Carlton at Adelaide Oval tonight, while the Gold Coast trio will play the Adelaide Crows at Metrion on Saturday, and Reid will join Tippett in the Sydney derby.

Nick Riewoldt and Sam Gilbert will fly the Queensland flag for St.Kilda against Geelong.

Ben Keays, dropped by the Lions after playing Round 1, is in the emergencies, while Brad Scheer was named in the Suns emergencies for the first time.

Teams for the Monday game between Richmond and Melbourne and the Collingwood – Essendon game on Sunday have not yet been named.