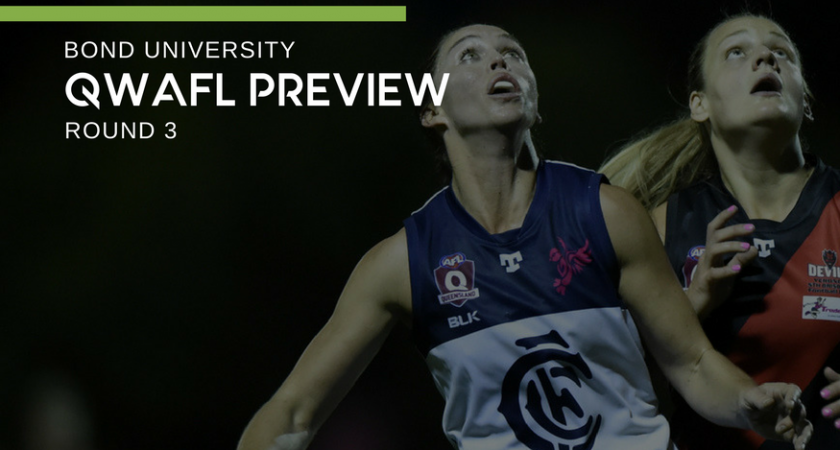 Match of the Round:

Live blog via here from 3:30pm
Traditional rivals Yeronga and Coorparoo are this week’s headliners. With Round 1 a washout and Round 2 a scheduled bye, Yeronga now get their first crack at QWAFL footy in 2017.

The Devils have a tough task ahead of them on Saturday. Coorparoo come off a resounding 52-point Round 1 win against Wilston Grange and, while Yeronga took the chocolates last time they met in 2016 with a 44-19 victory, a lot has changed in QWAFL land.

Historically, the ledger sways in Coorparoo’s favour. They got the better of Yeronga in the 2013 grand final and then again in 2015, when they defeated the Devils in the preliminary final before going on to win the premiership.

We look set for another enthralling contest on Saturday; both sides packing serious heat with some big inclusions to their line-ups (see below).

Lions Back in Action:

Round three marks the date almost every club has been waiting for: the return of Brisbane Lions players to the QWAFL.

Coorparoo has named Lions skipper Emma Zielke and small forward Jessica Wuetschner.  Wilston Grange has Tahlia Randall returning with Jordan Membrey and Jamie Stanton debuting in the blue, red and white. Megan Hunt will bolster UQ’s midfield this week, while Coolangatta will have Leah Kaslar, Selina Goodman and Nikki Wallace back to help their title defence.

After a weekend off, all teams have gone back to the drawing board and set their plans for this week. With an interrupted start to the season, it will be interesting to see which clubs stick to their guns and which ones try something different in round three. Zillmere and Wilston Grange square off this week for a shot at redemption, after both succumbed to hefty defeats in round two.

Coaches John Taylor and Laura Kidd have wrung the changes for the match, with two different looking sides expected to hit the paddock.

After getting up over Maroochydore a couple of weeks ago, UQ will have to take it up a level if they are to give Coolangatta a run for their money, the reigning premiers having blown Zillmere away to the tune of 111 points in their last match.

The Red Lions need to find a way to keep Rosalie Adamson quiet, after the key forward scored five goals in her three quarters on the ground for Coolangatta in Round 1.

18-year-old Zillmere forward Emily Brown will become one of the youngest captains the QWAFL has seen when she leads her side for the first time in their clash against Wilston Grange on Saturday.

Brown has been given the job in the absence of regular captain Mimi Hoger, who will miss the game with work commitments, and Vice-captain Caitlyn Huth, who is sidelined with an injury.

This gives Brown the opportunity to lead a young side injected with four new girls making their QWAFL debut this week.

One of those to keep an eye on is club newcomer Jacinta King who has impressed on the training track throughout the preseason and will line up at full back against Grange’s Katie McGlade on Saturday.