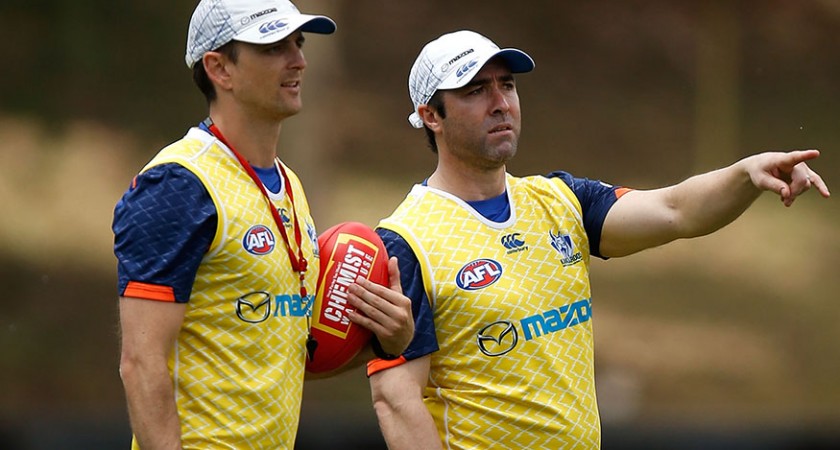 Normally the AFL pre-season is about players and opportunity, but on Sunday it was North Melbourne assistant-coach Josh Drummond who grabbed the Queensland headlines in Round 2 of the JLT Community Series.

Drummond, in his fifth year on the coaching staff at North after a stellar playing career with the Brisbane Lions, deputised for Brad Scott as senior coach in the game against Hawthorn.

It was the 33-year-old Sunshine Coaster’s first time at the helm as the Roos’ played their first official game at their Arden Street headquarters since it was abandoned as an AFL venue in 1985.

And, as much as it was only an extra line on his coaching CV, it was a day ‘Drummo’ won’t forget in a hurry.

Coming off eight disposals and 29 hit-outs in the Roos’ two-point win over the 2016 grand finalists in Round 1 of the JLT series, he had six disposals, 27 hit-outs and three goals against the Hawks.

“Absolutely he (Preuss) does give us something to think about for round one,” Drummond said. “He was really strong last week taking the No.1 ruck mantle and today he and Goldy chopped and changed a bit and he played a bit up forward.

“He is one who certainly stepped up. They are both probably No.1 ruck types in that they are genuine ruckmen but he gives us something to think about up forward as well.”

Preuss was a presence in the ruck but also created a good target forward finishing with three goals. Two of those goals were from good strong marks while for the other he picked the ball up from his toes on the run.

Fellow Queenslander Corey Wagner had 13 disposals and four tackles for North, while Brendan Whitecross, in his first hit out of the season after injury, got through limited game time without incident.

The Gold Coast Suns’ Alex Sexton was the other Queenslander to make a big statement in week 2 of the JLT series, starring in their three-point win over Essendon in Mackay on Sunday.

Playing his first game of the season, Sexton had 26 possessions, seven marks, six clearances and kicked two goals to be best afield.

He had a disposal efficiency of 84% to show he his ready to build on his strong 2016 season.

Jesse Joyce had 16 possessions for the Suns and Rory Thompson six.

David Armitage was a standout for St.Kilda in their one-point win over Port Adelaide at Etihad Stadium to open the round on Thursday night with 23 possessions.

Nick Riewoldt (14 possessions), Sam Gilbert (11 possessions) and Tom Hickey (5 possessions and 16 hit-outs) also played for the Saints, while Charlie Dixon, coming off ankle surgery, got through without mishap. He had six possessions for Port.

Jake Spencer had seven disposals and nine hit-outs for Melbourne in their 54-point win over Carlton, while Lachie Weller had 12 possessions for Fremantle in their 55-point loss to West Coast.

The draw for Round 3 of the JLT Series is:-