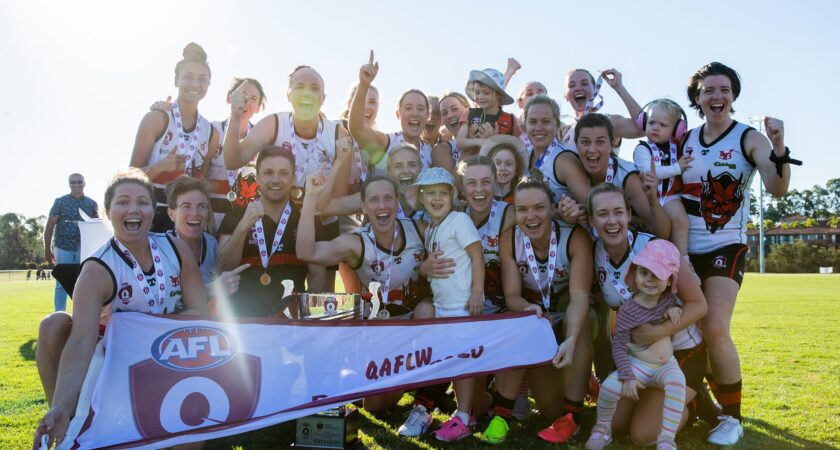 The highly anticipated Bond University QAFLW fixture has been officially released today, ahead of the 2021 season.

The action will kick off on Saturday, February 27th, overlapping with the NAB AFL Women’s competition.

Queensland State Leagues Competition Manager, Matt Bialkowski, said it was the second year in a row* the QAFLW competition would be played during the AFLW season.

“The benefit of moving the QAFLW season forward to underpin the AFLW competition allows the Brisbane Lions and Gold Coast SUNS to play their unselected AFLW players in the Queensland State League Women’s competition,” he said.

“This opportunity enables the AFLW players to keep match fit, have access to a high-quality competition and perform at the QAFLW level in an attempt to regain their AFLW spot leading into the AFLW finals.”

A grand final rematch will headline QAFLW round one with Yeronga and Coolangatta to face off at Leyshon Park.

Five months since they clinched the flag in September, Yeronga won’t be resting on their laurels after storming home in last year’s final 56-9.

“We don’t take anything for granted – the team has been working hard in the pre-season and we’re ready and raring for a new season of footy,” said Helena McNaught, Yeronga South Brisbane Devils Female Football Operations Manager.

“After our senior player Jamie Howell was announced as the 2021 NAB AFLW Premiership Cup Ambassador earlier in the year, the girls have been buzzing to get the season underway.”

“We’re looking to build on the fantastic year we had in 2020 and will be looking for a round one win at home in a few weeks.”

The QAFLW Development reigning premiers will also play at home in round one, with Giffin Park staging the re-match of last year’s 26-23 nail biter between Coorparoo and Aspley.

Round two will see the U19 Brisbane Lions and Gold Coast SUNS talent squads play at Bond University following the QAFLW match between Bond and Coorparoo.

The ANZAC Day weekend is shaping up to be an action-packed weekend of footy with Maroochydore and Wilson Grange hosting QAFL/QAFLW double headers, while round 10 will see the third annual running of Pride Round across the state. All QAFLW and Development games will be played in a festival of footy at Giffin Park.

The 14 game season, to be played over 16 weeks, will see each QAFLW team play a home and away match vs each opposition.

The 2021 season will showcase a number of exciting new rule changes.  To align with the AFLW, each QAFLW and Development side will field 16 players and now have an increased bench of 5 players (formerly 4).

In an exciting step forward in the development of youth girls on the elite pathway, the QAFLW List Management rules have been modified for 2021 allowing girls turning 17 to play for a QAFLW club on a Local Interchange (Type 2) Permit, provided they are primary registered with a youth club.

The youth age eligible players will be able to play in the QAFLW competition, and return to Youth competitions following the completion of the QAFLW season in time to play enough games to be eligible for Youth finals.

Mr Bialkowski thanked competition sponsor Bond University for their role is assisting in the future growth of women’s footy.

“On behalf of AFL Queensland, I’d like to thank Bond University for their continual commitment and support of our state league women’s program and the development of women’s footy in South East Queensland,” he said.

*The 2020 season was disrupted due to the suspension of play for COVID.

*Please note; times and venues are subject to change.