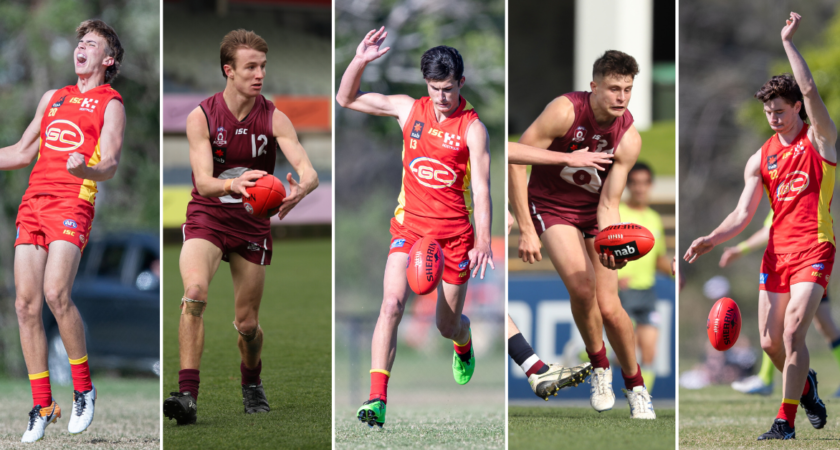 There is only one week left until the 2020 NAB AFL Draft, which will take place next Wednesday night, December 9 as a host of new players join the AFL ranks for the first time.

Queensland clubs Brisbane and Gold Coast hold seven and four picks respectively, with the Lions securing a future first round pick thanks to the recent trade with Melbourne. While Gold Coast still holds a 2020 round one pick to propel their 2021 season outlook.

A late rule tweak made by the AFL last week saw the SUNS select both Alex Davies, a 2019 All Australian Under 17 player and projected top 20 pick, and Joel Jeffrey, another top academy prospect, meaning a Queenslander has already made the leap to the AFL.

In part one of our NAB AFL Draft preview, we look at the top prospects from the Brisbane Lions Academy. You can check out Part One here

Part Two of the series looks at the best talent coming out of the Gold Coast SUNS Academy.

A half-forward/winger Aiden Fyfe was named the Round 15 QAFL Rising Star in 2019, after just playing in his third seniors’ game. A solid 2020 season with the Broadbeach Cats and Gold Coast Academy saw Fyfe prove he has a great leap, defensive pressure, and powerful left boot. Lighting up the Queensland combine, Fyfe topped the ranks in the running vertical jump for both right (84cm) and left (95cm) legs as well as the 20m sprint, where he clocked 2.9 seconds.

Standing at 183cm, Pescud is a dangerous medium forward who is known for his speed, marking ability and consistent goal scoring. Making his senior debut at the age of 16, Max had a standout 2020 session playing for Surfers Paradise where he kicked fifteen goals in six games showing his prowess up forward. Catching the eye of scouts during the two Academy series games against the Brisbane Lions, Pescud averaged 22.5 disposals, 5.5 marks and five tackles with the SUNS going onto win both battles.

Boasting a strong left boot, solid aerial ability, and elite speed, Rhys has shown the impact he can have on the field. A tall midfielder who rotated between the wing and defence for Labrador Tigers in the 2020 QAFL season, Nicholls uses his pace to break away from opponents and move the ball forward as cleanly as possible. Having a good performance at the draft combine testing with his 2.96-second 20m sprint, Nicholls was also solid with a 75cm running vertical jump. Eligible to be pre-listed by Gold Coast Suns under their Academy concessions and will be a likely addition to the SUNS rookie list.

18-year-old Johnston has been a staple for the Suns Academy over the last two years, playing a handful of times during the 2019 NAB leagues and captaining the team to a pair of wins over the Lions during this year’s Academy series. A strong-bodied defender that has excellent closing speed and competes well aerially, Jack has been able to play throughout 2020 for Palm Beach Currumbin’s senior side who made it to the second week of finals.

An athletic key position player who excels aerially at 200cm and weighs roughly 88kgs, Pickering is also a talented Basketballer. He impressed this year during his time with Broadbeach Cats and also for the Gold Coast Suns Academy, showing signs of his development. A Townsville junior, who played for Hermit Park, Ryan relocated to the Gold Coast in order to chase his AFL draft dream.

One of Queensland’s hottest draft prospects, Alex Davies is almost certain to be a pre-Draft selection to the Gold Coast SUNS. A tall inside midfielder with quick hands, Davies represented Queensland as a basketballer in 2016 before turning his focus to AFL. 2019 saw Davies selected in the NAB AFL Australian U17 team and U17 NAB All-Stars ‘Futures’ clash, though an elbow ligament injury saw him miss the 2020 Academy series.

All players participated in the 2020 AFL Draft Combine