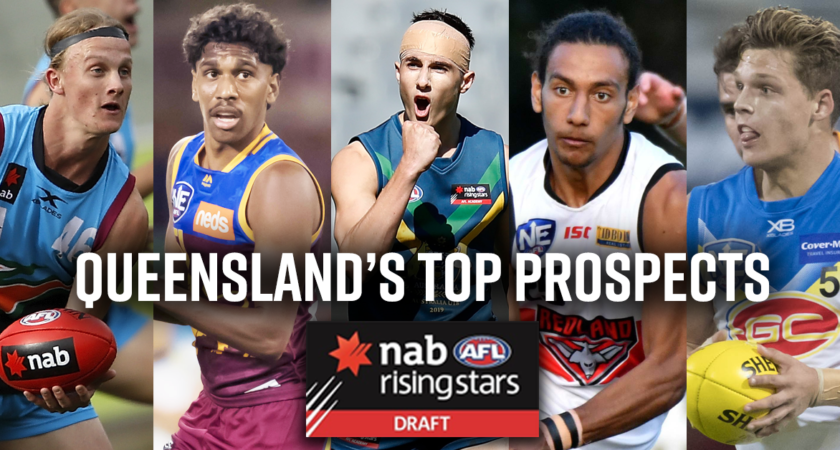 There is just one week left until the 2019 NAB AFL Draft, which will take place next Wednesday night, November 27 as a host of new players join the AFL ranks for the first time.

Queensland clubs Brisbane and Gold Coast hold five and six picks respectively in the draft, including the SUNS who hold the first and second overall picks plus a further two picks inside 20.

Once again, a host of Queenslanders will be hoping to be selected in the draft and should they make their way to either the SUNS or the Lions, they will be subject to the same Academy bidding season as years previous.

One change this year, is the draft concessions afforded to the SUNS by the AFL in early October. Under these new rules, Gold Coast were permitted to pre-sign a number of SUNS Academy players.

Using this, the SUNS selected both Connor Budarick, a 2019 All Australian Under 18 player and projected top 40 pick, and Matt Conroy, another top academy prospect, meaning two Queenslanders have already made the leap to the AFL.

Nonetheless, let’s take a look at the top Queenslanders who could find a home in the AFL next week.

Reville has rounded out a busy 2019 schedule which saw the former Maryborough junior play for three different clubs at two different levels. In all, he featured for both Brisbane and Redland in the NEAFL while also playing four games in the QAFL with Western Magpies. He averaged 13.8 disposals across his ten NEAFL games this season and bettered than with the Lions NAB League side with 18.6 disposals. An explosive outside runner, Reville loves to take the game on and is efficient in disposal, averaging 77.15% efficiency in the NEAFL.

A Surfers Paradise junior, Gore featured for the Allies and Gold Coast at both NEAFL and NAB League levels in 2019. While not a big ball winner, as he showed across his combined 19 games across the various competitions and championships, Gore almost split his time between the midfield and forward 50. Despite his low disposal volume, Gore showed his knack for hitting the scoreboard, kicking a 13 goals for the SUNS in the NEAFL including a four-goal haul against Greater Western Sydney in Round 17.

Coleman was overlooked in 2018 despite a strong season which culminated in an invitation to the NAB AFL Draft combine. Despite being overlooked, Coleman spent considerable time with the Brisbane NEAFL team in 2019 where he was often the first non-listed player on the team sheet. In all, Coleman played 18 NEAFL games with the Lions this season, missing games only when the Lions fielded a full AFL-listed team. He finished season in the NEAFL Rising Star standings and kicked 11 goals as a crafty small forward.

A medium sized-forward who has no trouble finding the football for himself, Cumberland was a consistent threat inside 50 across the season. He collected 26 disposals in a starring performance for the Lions against Dandenong in the NAB League and was among the Allies’ best against South Australia at the NAB AFL Under 18 National Championships. Cumberland played five games for the Lions in the NEAFL where he averaged 7.7 disposals and was part of their premiership winning team.

Martyn was the Lions’ best player throughout their 2019 NAB League campaign, winning the team’s most valuable player in large due to his ball-winning ability through the middle. Across his five games, Martyn averaged 28.8 disposals and only once went below 30 disposals. Martyn also featured for Aspley and Brisbane in the NEAFL in smaller roles but if deployed through the middle, Martyn has the ability to bring others into the game.