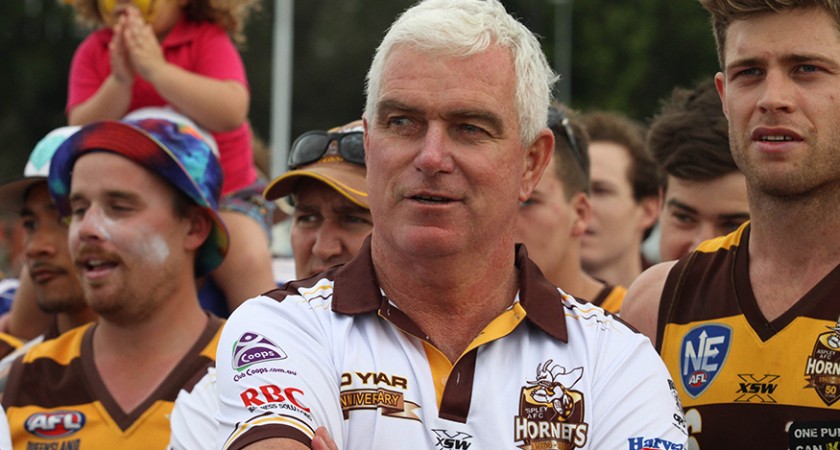 Three of Queensland’s most respected coaches, John Blair, Rick Hanlon and Danny Craven will coach the three representative sides in this, the 150th year of football in Queensland.

A 33-game utility AFL player with South Melbourne, Fitzroy and St. Kilda from 1975-80, Blair moved to Queensland in 1981 to begin what has been a 36-year association and a massive contribution to the code in the Sunshine State.

“It’s a huge honour, especially in the 150th year. It’s nice to be offered and its nice to be involved,” Blair said.

“I think all the 150 year stuff will really sink in after the event. Obviously it’s a great honour, but you have still got to get the job done, so that’s the priority from here on in.

“This game is hugely important; players have to understand the importance of it, and the opportunity that is there for them.

“There are guys that have gone on to make AFL careers out of playing well in state games, it got Zorko into the picture, as it did Sam Gilbert and Adam Oxley, so the reward is there to perform on the day.”

AFL Cape York Regional Manager Rick Hanlon will take the reins of the Northerners and Mayne Coach Danny Craven, the Southerners, in the North Queensland vs. South Queensland curtain raiser to the Western Bulldogs vs. Gold Coast SUNS Round 17 match at Cairns Cazaly’s Stadium on Saturday July 16.

Rick Hanlon made his senior football debut at age 17 in Tasmania, where he won the William Leitch Medal for the best and fairest player in 1990, before landing in North Queensland in 1998.

The representative coaching scene is nothing new to him, having previously coached the Queensland Country Under 18 team, as well as the Cairns representative team in the early 2000’s.

Hanlon said he was delighted to get the call up.

“With the 150 year celebration, it makes it even more special in relation with what we are doing with footy throughout the state, and the recognition of AFL over that period,” Hanlon said.

“Rep footy is about you strutting your stuff against equal or better opponents from other leagues. It’s great to be able to work with players who have the courage to be able to pit themselves against other guys from another competition to see where they sit.”

South Queensland Coach Danny Craven brings with him a wealth of experience. The 58-game AFL player with St. Kilda and Brisbane was the Queensland senior state coach from 2003-2006, as well as the Queensland Under 18 coach in 2007.

He has also coached Mt Gravatt to their maiden QAFL premiership in 2002, in just his second year in the job.

Like Hanlon, Craven said he is eager to work with some of the best his area has to offer.

“I’m excited to step back into the state footy arena, I’m a passionate Queenslander, and we all love to compete with the best of the best,” Craven said.

“I’m really looking forward to the opportunity, especially in this anniversary. It gives you the chance of bragging rights, and the chance to put South East Queensland footy on the map.”

“The 150 year celebrations mark a really special year for us, so to have a Queensland footy legend in John Blair in charge of the QAFL team, and Rick Hanlon and Danny Craven coaching the North and South teams is really fitting,” Warren said.

“I have no doubt that these three men will lead their teams superbly, that the QAFL team will take it right to the West Australian Amateurs, and the North vs. South rivalry will go to another level again in 2016.”