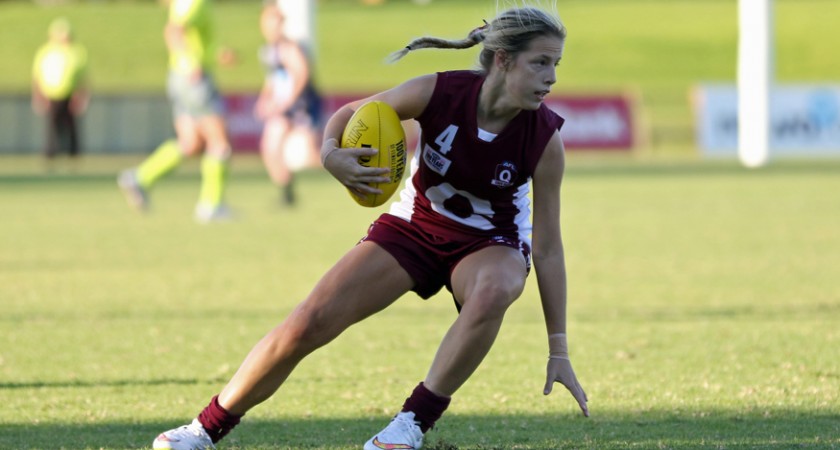 Over 250 players are set to embark on Yeronga this Thursday as part of the four day,  2015 Under 17 Youth Girls Championships.

So who should you keep an eye on? These players:

Probably the most mercurial player at the championships this year. Howarth knows where the goals are at all times, and isn’t afraid to pull a rabbit out of the hat to find them; even if that means kicking a barrel. If she is given the slightest chance of a goal, she will light up this championship.

Abbott is an extremely versatile player who can play as a tall midfielder, or be an option at half forward. She has a phenomenal left foot, is strong overhead, and is extremely athletic.

Collings’ work rate is what will make her stand out this year. She is a hardworking midfielder, who wins the in close stuff, but can also be extremely damaging on the outside. Keep an eye out for her run and carry, taking the game on when she can.

One of the most elite kicks you’ll see at the championships, King breaks games open on the right boot. Her hockey background makes her cool calm and collected in traffic. The North Cairns Tigers senior player was an All-Australian at the Youth Girls Championships this year.

Van De Wiel is an extremely clever, highly skilled player who loves to tuck the ball under the arm and go for a run. She finds a lot of her footy in the back half of the ground, allowing her to play that quarterback role, which will set Brisbane North up in their attack. Loves to bring others into the game through her disposal.

McDonald has adapted unbelievably to footy after starting just 18 months ago. Not only is she a high level ball winner in the middle, but she also is a potent target up forward. McDonald is hard at it, and has a fantastic work ethic.

Dunne will most likely hold a key post down back during the championships, but can also float up to the wing with impact if required. She is strong overhead and has a raking left boot that breaks lines and opens the game right up. She reads the ball superbly in flight so expect a few intercept marks throughout the four days.

Agita is a quick, nimble agile midfielder who can turn on a dime. She has a lovely left foot, which is her biggest asset. Agita never takes a backward step at the contest, and her work rate is through the roof. Will be a real barometer of the Townsville side this week.

Ballin is an athletic medium midfielder who has an impact on every contest she is near. Ballin’s biggest strength is her ability to win her own footy, before feeding it out to the outside runners. Look for her to get on her piercing right foot on the move.

At just 15 years old, Bella will be one to watch this carnival. At 185cm, she will be hard to stop in the ruck. Her tap work is excellent, bound to give Mackay first use more often than not in the middle, but definitely isn’t out of it once the ball hits the ground. She uses space well, can break tackles, and is reliable by foot.

The co-captain this week, who played with the Gold Coast Sunset team at the Under 14 Youth Girls State Championships this year. Connolly might be young, but she will attract a lot of the football across the four days. Her positioning and running patters are very strong, and she is a great user of the football. Has star written all over her for the years to come.

We don’t have to look back too far to see what Heslop is capable of. She was named as the Gold Cost Player of the Carnival at the recent Under 14 Youth Girls State Championships. The small midfielder runs extremely hard all game, is a magnet to the ball, and is a fantastic kick. With four years ahead of her in the youth girls system, she is definitely a star of the future.