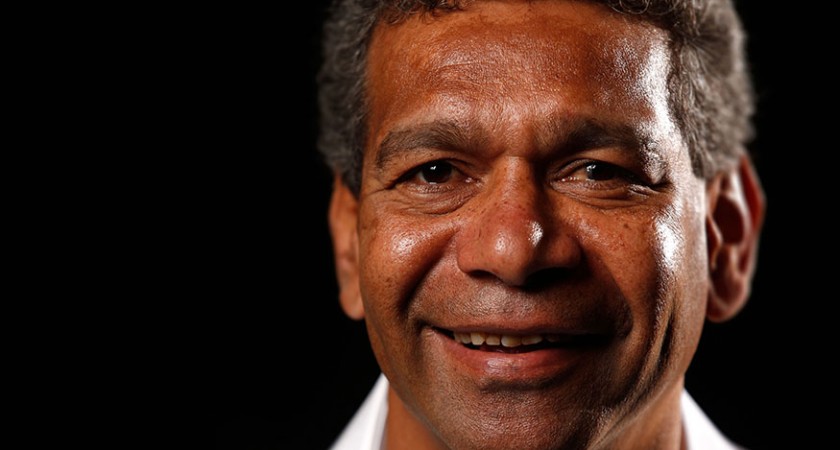 The 20 year anniversary of the AFL’s Racial Vilification Policy, a first in Australian sport, is being commemorated as part of the 2015 Toyota AFL Indigenous Round.

The AFL, along with Michael Long and Adam Goodes officially launched Indigenous Round today, Tuesday, May 26 at Bangarra Dance Theatre in Sydney.

Round 9 of the Toyota AFL Premiership season will celebrate the contribution Indigenous people have made to Australian Football and will kick off with the Marngrook game at the Sydney Cricket Ground when the Sydney Swans take on Carlton.

Following a number of racial vilification incidents on field, four players took a stand against racism in 1995 and led the discussion on the issue with the AFL on behalf of all Indigenous players – Michael Long, Michael McLean, Che Cockatoo Collins and Gilbert McAdam (pictured). This resulted in a policy that the whole industry can be proud of.

Gillon McLachlan said Indigenous Round recognises the huge contribution Indigenous players and communities have had on Australia’s Game.

“In 2015, we honour the 20th anniversary of the AFL Racial and Religious Vilification Policy, the first anti-racism rules in Australian sport. It was a landmark moment for reconciliation, promoting an inclusive AFL community built on mutual respect, opportunities and strong relationships with Indigenous Australians.”

The AFL today also reinforced its commitment to the Recognise campaign in support of the constitutional recognition of Aboriginal and Torres Strait Islander people in Australia’s founding document.

“The AFL has benefited from great Indigenous leaders and players, who have helped make our game what it it today.  We are very proud to again be hosting Indigenous Round, and to be supporting the Recognise Campaign.

“The Recognise campaign will be a feature of every AFL game and fans will see the big R for Recognise at the grounds and on the cover of their Footy Record.

“Nine AFL clubs have joined the movement towards constitutional recognition and will feature the R on their Indigenous themed guernseys,” said Mr McLachlan.

Tanya Hosch, the joint campaign director for RECOGNISE, said it was great to see the strong and growing support of the RECOGNISE campaign by the AFL and so many of the clubs and players.

“We are encouraged to see the genuine enthusiasm strong leadership for this movement across the AFL community – from fans, players, clubs, administrators, and at the highest levels of the AFL.”

In 2015 there are 72 Indigenous players listed at AFL clubs.

Highlights of 2015 Toyota AFL Indigenous Round include:

All Indigenous Round matches will feature a Welcome to Country ceremony pre-match; a symbolic ceremony where the traditional custodians of the land welcome members of the wider community.

The Indigenous Round Sherrin, symbolising the celebration of all Aboriginal and Torres Strait Islander AFL players, will be a feature at all Round 9 matches. The Sherrin footballs will be available to purchase via Rebel Sport and sherrin.com.au in both leather and synthetic with 10 per cent of sales to be donated by Sherrin to support the employment of Indigenous trainees via AFL SportsReady.

Fans will see the big R for Recognise marked in the centre circle at all AFL matches.

NAB AFL Auskick matches at half time of all AFL matches during Indigenous Round will involve mainly Indigenous or Torres Strait Islander players.

All 18 clubs will wear Indigenous Round themed guernseys and for the first time AFL umpires will wear an Indigenous themed shirt, designed by Indigenous artists and supported by OPSM.

Sydney Swans v Carlton will feature pre-match entertainment including a live performance from Dan Sultan, a guard of honour involving GO Foundation scholarship recipients and a fan zone to include Indigenous musicians and face painting.

Dreamtime Curtain-raiser: Rio Tinto Cup played between Footy Means Business participants. The match commences at 3:09pm Saturday May 30. The match will be televised by the Seven Network’s regional affiliate Southern Cross Television into the Darwin and Central markets at 10.30pm CST that evening.

Themed Together, The Long Walk 2015 will kick off with a community celebration at Federation Square on Saturday from noon with activities for all the family. The free Wellbeing concert will begin from 1pm featuring a range of artists, including Archie Roach. Michael Long will lead The Long Walk to the Dreamtime at the G match at 5:30pm.

The Dreamtime at the G match on Saturday night between Essendon and Richmond will feature pre-match entertainment including a live performance by Troy Cassar Daley with special guest Paul Kelly. 5000 tickets to Dreamtime at the G have been distributed to key Indigenous community organisations.

Adelaide Crows v Fremantle will feature the McLeod Challenge Grand Final curtain-raiser, as well as a pre-match performance from Dan Sultan along with Indigenous dancers.

West coast Eagles v Geelong Cats will celebrate the 10 year anniversary of the Wirrpanda Foundation and will feature the Stephen Michael Cup – Noogar v Yamatji curtain-raiser. There will also be a live performance by The Merinda’s at half time.

There will be a Long Walk to the Gabba which will cumulate with the 250 walkers doing a lap of honour prior to Brisbane Lions v St Kilda. Following the Welcome to Country on field by Songwoman Maroochy, the national anthem will be sung by Scott Campbell and a traditional dance performance by students of the Murri School. Indigenous performers will be at Gates 7 and 9 and traditional painting demonstrations will occur at Gate 2’s Lion Park.

AFL SportsReady will launch their Reconciliation Action Plan on Wednesday, May 27 as part of their commitment to create opportunities for Aboriginal and Torres Strait Islander people through quality education and employment.

For information on Indigenous Round, visit www.afl.com.au/indigenousround