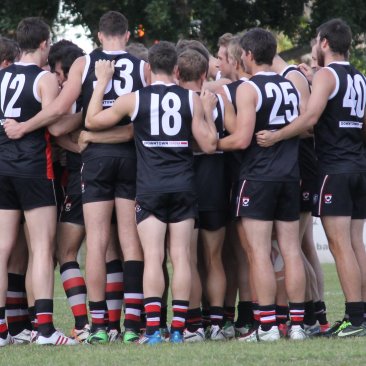 It won’t surprise anyone to see the Panthers in this spot. There is a lot of experience in their list, and high-quality experience at that, and their leaders, both current and future crops. Complacency is their greatest enemy, and while they are bullish about their chances, it doesn’t seem like many are going to take the premiership for granted. They’re skilful, well-disciplined and have a strong mix of youth and seniority. They’re the ones to beat.

Palm Beach has been clinical through the pre-season, dominating all comers. The Lions have trimmed down in preparation for some bigger grounds this season and in tough conditions they’ve shown this has already improved their ability to run out games. They’ve got plenty of skilful players and have kept the core of their premiership team from last year. From all reports, they’re a lot more cohesive than in recent years, with less player turnover in the playing group. At this stage, I’d say they’ll be fighting for Labrador for a grand final spot.

They’re loath to talk themselves up, but big pre-season wins fielding less than full strength sides  speak for themselves. As long as they can get their new recruits to gel, which hasn’t seemed to be a problem so far, they’ll be more than intimidating through the season. Players and supporters who have stuck with the Tigers through some tough times will no doubt enjoy their 2014 season a lot more.

The Gorillas have recruited smartly in the off-season and probably got lost a bit in the discussion of the new competition, with much of the focus on the NEAFL clubs joining the QAFL. They were impressive in their practice match against UQ and they have addressed a lot of their weaknesses of 2013. They’ve got more run in their legs and they’ll rely far less on their bigger bodies this season. Watch out for the Gorillas.

I’m not sure what a baby vulture is actually called, but you only need to head down to Dittmer Park to see what they look like, with Mt Gravatt fielding basically the youngest side in the QAFL. Mt Gravatt has a lot of young talent, most notably ruckman Wiley Buzza, but it’s going to be hard for them to compete against the experience of their opposition. The benefit will be that the crop of U18s, who were impressive last year, will learn and they will learn quickly what they need to do to improve.

No surprises, the Panthers are the red hot favourites and I think that tage will stay with them all year.

While they’ve been reluctant to talk themselves up, their pre-season games showed they’ve got some handy talent. If they can gel, they’ll be hard to beat.

Best of the 2013 Div 1 teams heading into the QAFL, and are looking better than this time last year. The Lions will run out games well and will feature high on the ladder.

Clever recruiting and increased fitness will help the Gorillas stay in it this year. On their best day in 2013, among the best in the Div one competition. Need t o be consistent and get their best 22 on the park each week.

Consistency is the key for the Demons this year. They’ve stayed relatively the same as the past two years on and off the field. Lapses last year saw them cough up games that they could have won. A young group, but with a lot of games under their belts, which is a dangerous mix for their opposition.

The most unknown quantity in the QAFL. The Cats are a very young side but some players are developing nicely. Faded in their last practice match, against Palm Beach, but will be stronger come round one.

The Magpies are another who have lost experience in the summer. They could finish a lot higher than this, with the middle of the ladder looking ot be quite even. The performance of guys like Brady Allen, who had a breakout debut year, will be the determining factor for them.

Still a developing side, but another year  and another pre-season in them. A tight knit group who will benefit from the inclusion of a couple of NEAFL players coming back most weeks. Their fight kept them in games last year and that will be a focus. Consistency in games and  week to week a big concern, while minimising  turnovers against more skilful, experienced teams, will be important.

Plenty have written UQ off before the season has even started, but I think they could surprise a few teams. That underdog status could help them push sides if they take the Red Lions too lightly. A young side that had trouble running out games last year looked to have some of the same issues in its pre-season hit-out against Wilston Grange. Not all about wins for them, but they need to be competitive and continue to improve.

The Vultures will be too young this season. There is a lot of talent at Dittmer Park, but you can’t replace experience. The bright side is these kids will benefit a lot from the challenge.

Queenslanders to shine in QClash7
Palm Beach's Askey back home