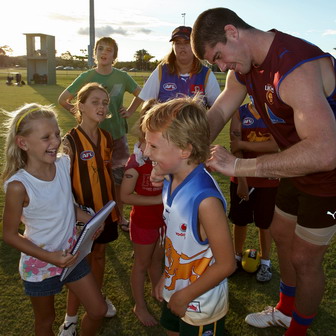 The Gold Coast Suns and Brisbane Lions will hit the road in February for the 2012 Australia Post AFL Community Camps.

The Gold Coast Suns will head to the Northern Rivers region and Rockhampton as part of the 2012 Australia Post AFL Community Camps, while the Brisbane Lions will visit the Sunshine Coast and Bundaberg.

The AFL stars will join locals in a variety of events including training sessions, clinics and school visits, giving football fans of all ages a chance to meet their heroes.

The Gold Coast Suns will hit the road first, with their camps taking place on the 5th and 6th of February.

The majority of the team will head south of the border, visiting Ballina, Lismore and Casino, while a small group including North Queensland’s very own Zac Smith, Charlie Dixon and Jarrod Harbrow will visit Rockhampton.

Gold Coast Suns Community Manager, Corey Bell, said the club was looking forward to playing a role in encouraging the next generation to participate in AFL.

“The camp gives the players a chance to spend quality time with our younger participants in regions that aren’t on our back door, but have a strong supporter base,” said Bell.

“Both the Northern Rivers region and Rockhampton are areas that AFL continues to grow, and locations fall into our Gold Coast SUNS Academy zone, where player such as Zac Smith and Charlie Dixon hail from”

The Brisbane Lions will head to Bundaberg and The Sunshine Coast on February 16 and 17, where events will include a Super Clinic and Talent Search at the Sunshine Coast and an evening footy function in Bundaberg.

Brisbane Lions General Manager, Football Operations, Dean Warren, said the Club was excited about the chance to meet fans in both regions.

“We’re really looking forward to spending time with the communities in the Sunshine Coast and Bundaberg,”

“It’s great for players and our coaches to be able to share their skills and knowledge with young players and to see first-hand how AFL is growing in the region,” he said.

Further details on camp activities, including ticketing information for the Bundaberg evening function, will be released shortly.