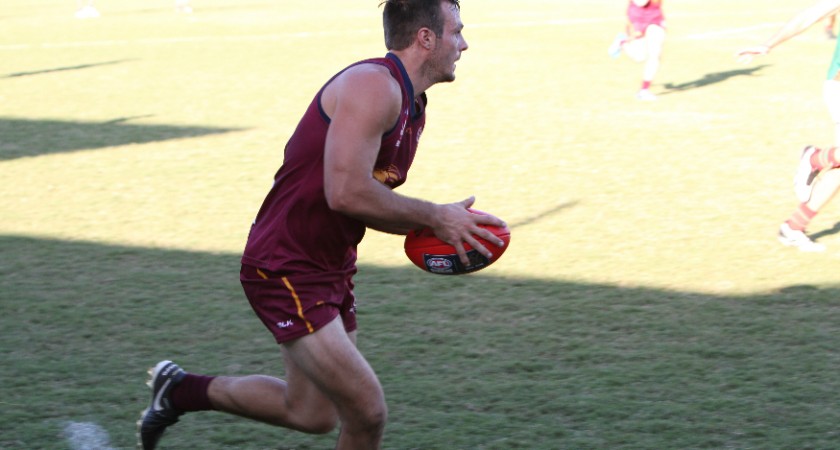 “Previous weeks haven’t been so good but they were coming off alright on the weekend, so I was happy with how I went” Douglas said.

The forward’s size allows him to play either tall or small in the forward line, and he is equally as dangerous at both.
He proved this point when he held on for a screamer in Round 9 against Labrador; a red-hot favourite for mark of the year.

“I just got lucky that time I think, tried a few times and have never quite taken them down so it was good I finally got one,” Douglas said of his high-flying grab.

Douglas has been playing footy since primary school, starting at Ormond Blues Juniors as a youngster before moving to Mornington Peninsula to play with Red Hill.

“My family have always been AFL supporters so it’s been AFL from a young age and always has been,” he said.

Douglas played with Red Hill for over 10 years before taking a leap to the VFL playing for Frankston last year.

2016 is Douglas’ first year playing in the QAFL with the 22 year-old jokingly accusing Melbourne’s cold weather as his main reason for moving.

“I think I’ll stay up here for a while, the weather’s too good and I’m enjoying it too much to want to move back home just yet,” Douglas said.

He has enjoyed success in his brief stint so far with Palm Beach; the team winning nine out of ten games this season.

“We didn’t win a game at Frankston last year at all so winning a game or two of footy isn’t too bad.
“It’s an easy club to walk into knowing no one, they made me feel pretty welcome.”

Palm Beach coach Chad Owens had nothing but praise for his star forward and was extremely impressed by his performance against UQ.

“I think it was the best individual performance we’ve seen from one of our players this year,” Owens said.
“He’s been huge for our club, the way he trains, the way he plays, the way he’s unselfish and looks to bring everyone into the game.

“He’s a very important, key member of the team.”

Owens believes Douglas’ time in the VFL has contributed to the leadership, voice and high work rate he demonstrates on the field.

“I think playing at the higher level he understands the game unfolds pretty quickly and he seems to be able to read that normally a lot quicker than other people on the ground,” Owens added.

“He’s a very smart player in the role that he plays and he reads the ball well.”

Looking forward, the only thing Douglas is concerned about is getting results for his team.

“It’d be a nice goal to finish on top, that would be a pretty good achievement.”
But he says the team is still not playing their best footy.

“I reckon we can improve a lot more actually,” Douglas admitted.

“We play a lot in patches during games where we play really well then drop off.

“Playing the full four quarters is probably our biggest aim.”

Douglas has never won a Premiership before, but could be on track to break that drought this year.

“Winning a senior flag would be the greatest thing ever, that’s what you play footy for.”