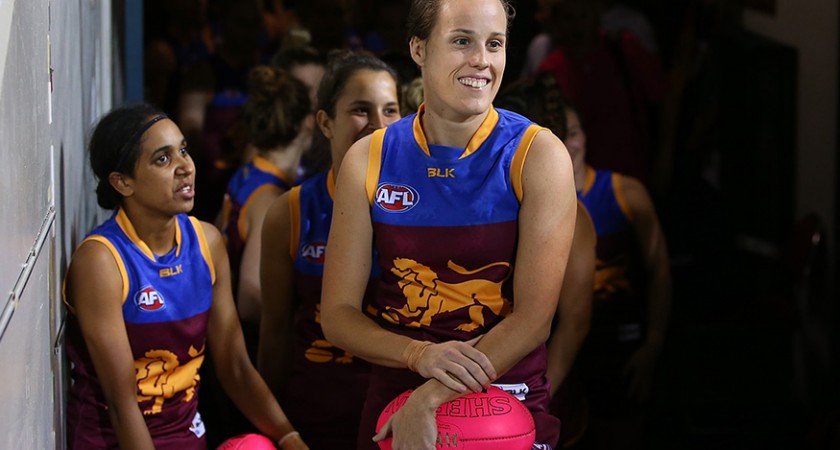 The Brisbane Lions have created history by being granted one of the inaugural licences for the AFL National Women’s League Season.

The Lions will fly the flag for Queensland as the only side from the Sunshine State after the successful teams were announced today at the MCG.

The Lions’ successful bid was based around the theme of “GAME CHANGER”, focused on how the Club’s commitment to a women’s team would change the face of women’s sport across the state and nation.

The Club already has the commitment of young star Tayla Harris – one of the most exciting players in the women’s game – to play for the Lions in the 2017 season.

The Queenslander is currently listed with Zillmere in the QWAFL and has played three AFL Women’s Exhibition Games for the Melbourne Football Club, debuting in 2014 when she was 17.

As well as being the Club’s marquee player, Harris will also take on a full time role at the Lions, driving female participation in her role as the Communications and Community Coordinator.

The Lions’ team will be coached by the vastly experienced Craig Starcevich – AFL Queensland’s current Female Football High Performance Manager – while an announcement on a Women’s CEO will be made by the Club in coming days.

The Adelaide Crows, the Brisbane Lions, Carlton, Collingwood, Fremantle, the GWS Giants, Melbourne and the Western Bulldogs were named as the successful applicants after the AFL Commission ruled on the submissions yesterday.

The Geelong Cats, North Melbourne, Richmond, St Kilda and the West Coast Eagles have each been granted provisional licences, and in the coming days will be provided with an outline of how the AFL will work closely with them to develop the talent base and ensure they are part of an expanded competition at the earliest possible opportunity, some as early as 2018.

Specific information will be provided to each club on how they can develop partnerships with state-league clubs, contribute to the talent pathway by supporting Youth Girls Academies, and enhance their capacity to support a women’s team.

Star players Daisy Pearce, Tayla Harris, Lauren Arnell, Brianna Davey, Sabrina Frederick-Traub and Darcy Vescio were in attendance for the historic announcement this morning and are available to media.

Good afternoon ladies and gentleman and thank you for being here today for what is truly a defining moment in the history of Australian Football.

Today we name the teams who will be part of the inaugural season of the AFL’s National Women’s Competition.

The concept of a national competition has been put together in short space of time but this day has been a long time coming.

The number of women and girls playing club football has doubled over the past five years, as record growth year-on-year has seen female participation reach 25 per cent of the total number of Australians playing our indigenous game.

This year we are forecasting 250 new teams will take the field.

Our CEO Gillon McLachlan calls it a revolution.

The AFL Commission would like to thank Gillon and his team at the AFL, along with AFL clubs, for turning a bold plan into what will soon be reality.

Before we announce the clubs who will be part of the inaugural season, I also want to thank those who have been championing women’s football since the first organised match was played in 1915.

The contribution and persistence of these pioneering individuals, who never lost the belief this day would come, will not be forgotten.

On behalf of the AFL Commission, I want express our deep gratitude and may you continue to help grow and develop women’s football at all levels.

Today we are joined by some of the best players our game has to offer, women who are already becoming house-hold names, role models and heroes for the next generation of players.

The establishment of a national women’s league will provide a platform to inspire young girls to reach for the stars and provide another avenue for fans of Australian football to enjoy.

Our game will never be the same.

Thirteen AFL clubs put forward a submission for a women’s licence and all 13 were outstanding.

We have been delighted by the quality of the submissions, and encouraged by the passion and desire each of these clubs have expressed to have a women’s team.

We want all 13 to know that they will be part of a successful AFL women’s league in future.

I will shortly be announcing the eight clubs that will be part of the inaugural 2017 season.

The other five clubs will be granted provisional licences, and we will be working closely with them to ensure they are part of an expanded competition by as soon as 2018 depending on the development of talent within their regions.

We are today committing to those five clubs that we will work with them on developing talent and capacity to be part of the new league as soon as possible.

Simon Lethlean and his team will be meeting with the inaugural eight clubs after this launch to discuss the process from here, and Simon will be available later to the media to answer any questions and outline some of the plans for 2017.

As I said earlier, this is just the beginning.

To those clubs who will compete in the inaugural season in 2017 – congratulations and good luck.

In alphabetical order, the teams that will compete in the inaugural national women’s league are:

Once again congratulations to all of the clubs that will compete in the national women’s league next year and in the years to come.

Thank you for your attendance for this historic announcement and may today signal a new and exciting era for the AFL.