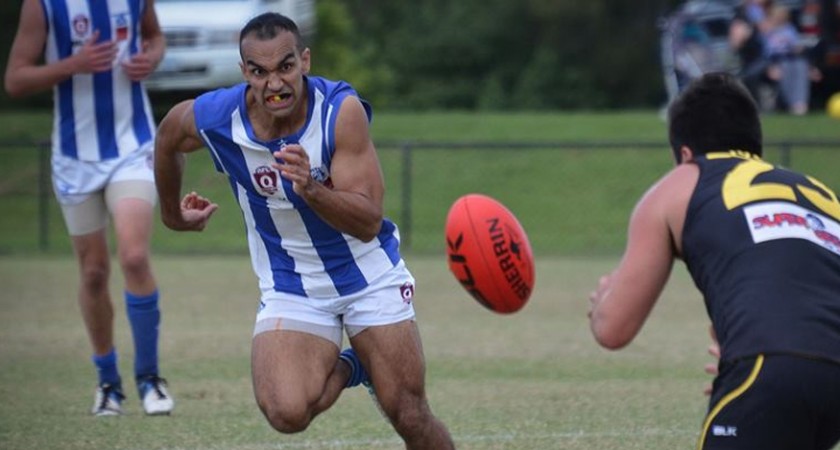 When Mt Gravatt player Jesse Green runs out against Surfers Paradise in the QAFL on Saturday, it just won’t be any old game.

This weekend, the AFL celebrates the Indigenous connection to our game through Sir Doug Nicholls Indigenous Round.

For Green, 30, this weekend is always one he marks in the calendar.

“It’s a celebration of our culture, and recognising the Indigenous aspect of the game, where it has eventuated from, its ritual roots of Mangrook,” Green said.

“It is a special day, a special round, but I represent my people every week, every time I run out, that’s why I wear my Indigenous mouth guard.”

He said the connection between the Indigenous people and Australian rules football is, and always will be strong.

“When you look at the AFL statistics, 11 per cent of players are Indigenous. We make up three per cent of the Australian population. You go to parts of Australia where its predominantly indigenous people, and AFL is the main sport. I think it’s very important to keep that link alive,” he said.

The key to continuing to grow the recognition is education.

“I think people are begging to understand that certain behaviour isn’t tolerated. There is still work to be done, but people seem to be jumping on board, which is good,” Green said.

“A lot of people don’t see the comparison between Marn Grook and AFL, they say it’s all western made, but when you actually break down Marn Grook, a lot evolved from there.

“Recognition is the big one. It’s such a big topic on a whole scale of ways, but I think that we are definitely heading in the right direction. If there is going to be anything changed going forward it is just continuing the education; that’s the key. I don’t think anything drastic needs to happen.”

Marn Grook is a traditional Indigenous game, which was played by punt kicking a stuffed ball , which has very strong similarities to the modern day Australian rules we know today.

This weekend won’t be the only time the Vultures recognise their Indigenous connection.

“We are going to bring out our own Indigenous jumper this year. It won’t be this round, but it will be at a time that is significant to our club.

Despite the occasion, he is more than focused on the job at hand; banking another four-points for Mt Gravatt.

“With where our club is at, at the moment we are in a good space, so it’ll just be about me helping the team this weekend,” Green said.

The Vultures host the Demons this Saturday at Dittmer Park from 2:00pm.

Some of the Indigenous players in the QAFL this weekend

What’s happening around the grounds

Queensland footy legend Greg Butler will toss the coin before the game.