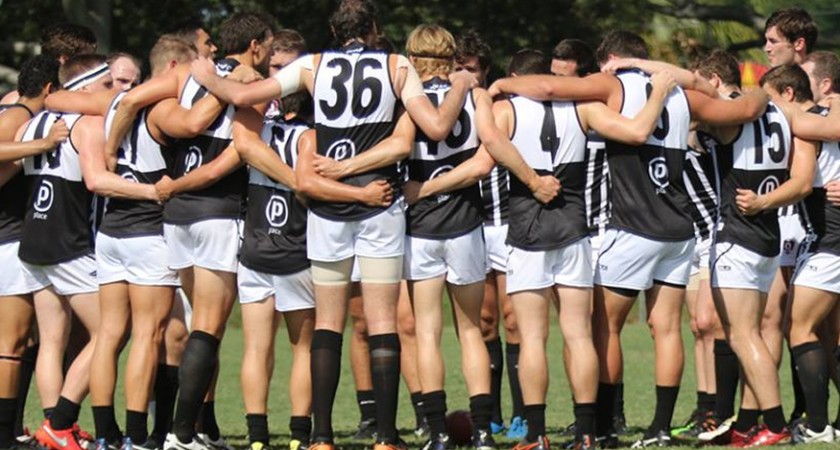 The 19-year-old put himself in the firing line, playing across halfback and sitting in the hole for the Magpies in their thrilling win over Labrador on Saturday.

“I thought I went alright. Usually I like to play that drift across roll, where you sit in the hole, try and take a few uncontested marks. I copped a few knees in the back for that on the weekend, but that’s okay, that comes with the roll,” Bridge said.

The game itself was as good as Bridge’s individual performance.

The Magpies kicked two goals in the last two minutes to pinch the win, leaving the crowd and Cooke-Murphy Oval stunned.

“It was a really tough game I thought. There was a lot of really good passages of play from both teams, so we were lucky in the end to get those two goals late and win,” he said.

“I always believe that, as long as there is more minutes on the clock than goals you need to kick, you can always win, so we were always a chance.”

The win was Bridges third in the black and white, after arriving at the nest at the beginning of the year.

In a bold decision, he and his partner packed up their things in North Queensland and made the move to Brisbane.

“I just wanted to play a bit better footy. See how far I can go, and really test myself,” Bridge said.

After being pointed in the Magpies direction by a couple of mates, it didn’t take long for him to lock down on his new football home.

“A few friends from Cairns pointed me in that direction. I got in touch with Pete McClennan, and he sold it to me,” Bridge said.

“I moved into the north side in Zillmere, so driving to training can be a bit of a nightmare… I’m definitely not used to this much traffic.”

It’s a move that has paid dividends though, with Bridge becoming a part of the furniture around Chelmer very quickly.

“My initial thoughts were really, really good. The blokes were very welcoming, they are a really good family club, and really made me feel welcome,” he said.

“Cal Carseldine looked after me, he is just that kind of bloke. He really took me under his wing and helped me out; he is great with everyone.”

Bridge, who spent his junior footy at North Cairns, has a team first attitude when it comes to what he wants to get out of 2016.

“I just want to play good consistent footy. Hopefully the boys can turn it around, and we can make the finals,” he said.

But as for the future, he wants to take his footy to the highest level possible.

Bridge will be back in action this Saturday, when the Western Magpies take on UQ at Field 9 from 2:00pm.

U18 Preview: Queensland vs. Tasmania
Three more years for Sexton