While American Mason Cox was running around on the MCG yesterday, Labrador had their own American connection. Ex-NFL player Brandon Kaufman, who was signed by the Gold Coast SUNS as an international scholarship player earlier this month, played his first game of footy with the Tigers in the reserves. He might be pretty green when it comes to footy, but the 196cm former Buffalo Bills wide receiver runs 100 metres in 10.8 seconds, and 400 metres in 48 seconds. Talk about an athlete! 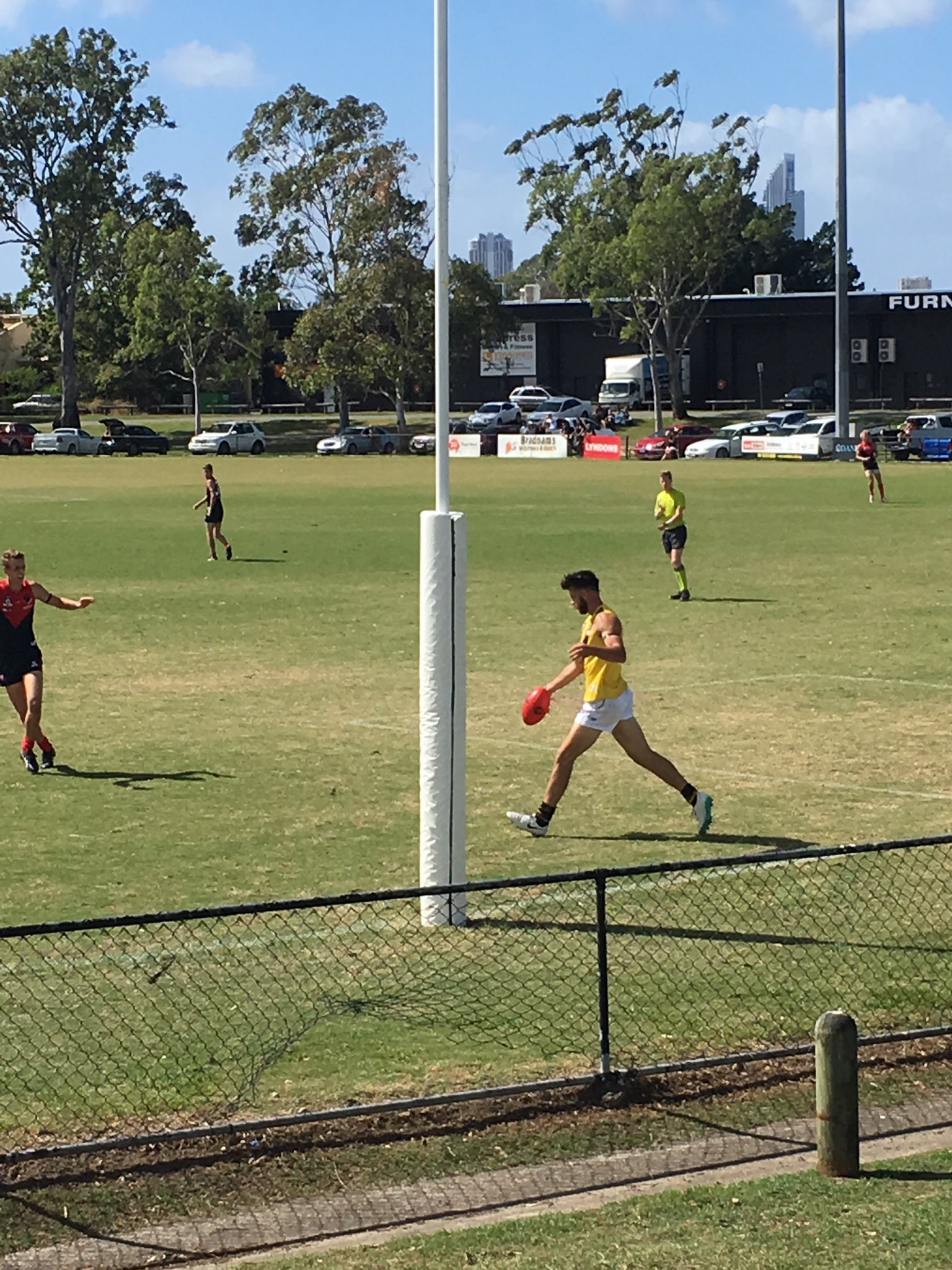 Season 2016 kicked off for the QWAFA on the weekend, and the top four already looks very interesting. Seven new teams entered in 2016, and four of them occupy the top four spots. Yeronga, Maroochydore, Broadbeach and Coolangatta-Tweed all had first up wins on the weekend. Not a bad way to start off in the competition.

Whether you’re a 150 game senior player, or a junior in your first year of footy, Sandgate showed on the weekend that they commemorated ANZAC Day as one club. As The Last Post was played before their Sunday night QAFL game against Wilston Grange, the Hawks’ senior team and some of their junior players lined up arm-in-arm in a mark of respect to our service men and women.

When the Queensland State Academy team took to Aspley Saturday morning, you might have noticed they were missing two bottom age stars. That’s because Connor Ballenden and Jack Clayton were in New Zealand with the Australian Under 17 Academy team, taking on the New Zealand national senior team. Australia won both games comfortably, and took the opportunity while over their to attend the Dawn Service on ANZAC Day in Auckland. Both boys should be back in action for Queensland in the NAB AFL Under 18 Championships. 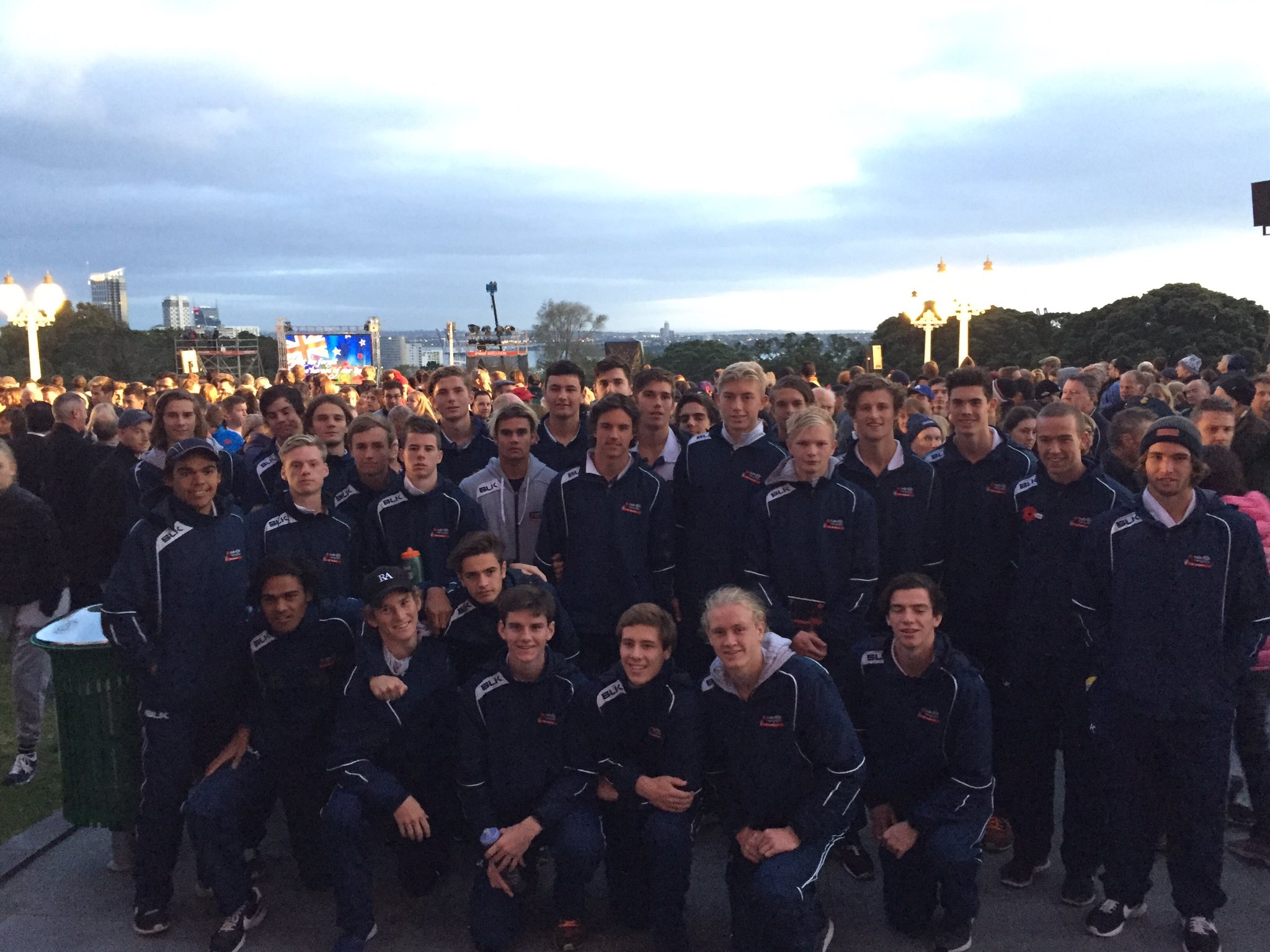 A debut to remember

There is no bigger home and away stage to make your debut than then AFL Collingwood Essendon ANZAC Day game. Imagine running out for the first time in front of over 85,000 fans. For Toowoomba product, Josh Smith, who played his senior footy at Morningside and Redland, this was a reality. To top the day off, he snapped a sausage roll on his right peg in the second quarter, and the boys in black and white got around him. If you’re looking for a statistical breakdown of his debut, look no further than Peter Bluchers AFL Round 5 wrap HERE. His AFL previews and reviews on www.aflq-new.fspdev.com each week are magnificently written. Bluch is a magician when it comes to statistics.

We might not have seen the official debut of Brent Staker in Magpies colours yet this year due to an ongoing hammy complaint, but that certainly doesn’t mean he isn’t working around the traps. Stakes, not for the first time, pulled on the pink runners uniform on Saturday, directing traffic all afternoon. Whether it was a message from the coach, calling a player for a rotation, or pulling a player aside for a quick chat, he was very, very good with the team.

#CreateWelcome
There was a special photo booth at Springwood on Saturday, a very welcoming one. The Pumas were the first club to use the #CreateWelcome booth, which is a social movement inspiring people to create messages of welcome and belonging for refugees and people seeking asylum. All clubs are invited to have the booth at a match this year, and to share their photos on Instagram using the hashtag.

Community footy video of the week

Check out what Broadbeach Coach Brett Andrews had to say following the Cats’ stunning win over the Magpies on Saturday. Fair to say he was as shocked as we were.