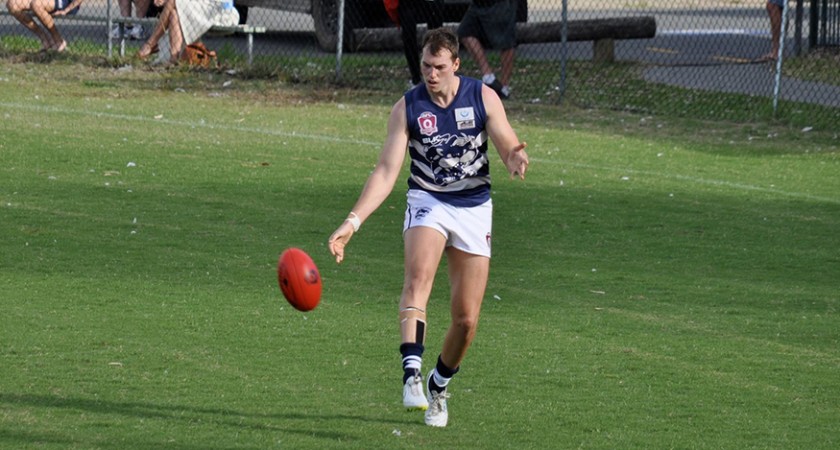 Broadbeach big man Nathan Quick is the round 2 Syd Guildford nominee, following his standout performance in the defensive 50 for the Cats in their win over Surfers Paradise.

Quick, a key defender, not only beat his direct opponent all afternoon, but also won a stack of it floating around the half back line, becoming the first phase of Broadbeach’s attacking run.

The versatility he has – being able to shut down the monster forwards each week – but still run off them and be an influence with the ball, is the reason he is so valuable.

He was a key part in ensuring Broadbeach go into round 3 with a 1-1 record.

“I got a bit more of the ball this week which was nice. It’s pretty easy when you’ve got guys in the backline who line up on the good players, which let me float around a bit more,” a modest Quick said.

While the win was comfortable in the end, the start wasn’t ideal.

“You’re always worried when its three goals to zero, but I knew once we started using the ball properly we would be right, it just took a bit longer than we would have liked,” he said.

In 2016, Quick isn’t concerned with just getting a kick; he has 21 other bodies to look after as skipper.

“The captaincy has been really good. You don’t get the luxury of sitting back, you have got to be up all the time, and I think that’s probably helped me a little bit,” he said.

“I haven’t really changed too much. I spoke to BA [Senior Coach Brett Andrews], asked if I need to do anything differently, and he said I was given it for a reason so keep doing the same thing, which helps,” he said.

The captaincy couldn’t go to anyone more deserving. He bleeds blue and white.

“I’ve been here since under 8’s. The only way I would play anywhere else is if I moved interstate, but I can’t see that happening, I don’t want to play in the cold,” Quick said.

He knows what the Cats are capable of this year; the whole group does, it’s just a matter of leading them there.

“When we play our best, we beat Labrador last year, we beat Morningside last year, I think we are capable of being right up there, but we have just got to do that consistently. There is no good beating the top side and then losing the next two,” Quick said.

“If we play our best, consistent football, we are capable of being right up there at the end of the year.”

Playing finals is about the team, but there is also a personal incentive for Quick if they get there.

“Hopefully we can play finals. I’ve played one final in 110 or so games, so that’s definitely the goal.”

Broadbeach have the chance to get ahead of the ledger this Saturday when they take on Mt Gravatt at home at 2pm.