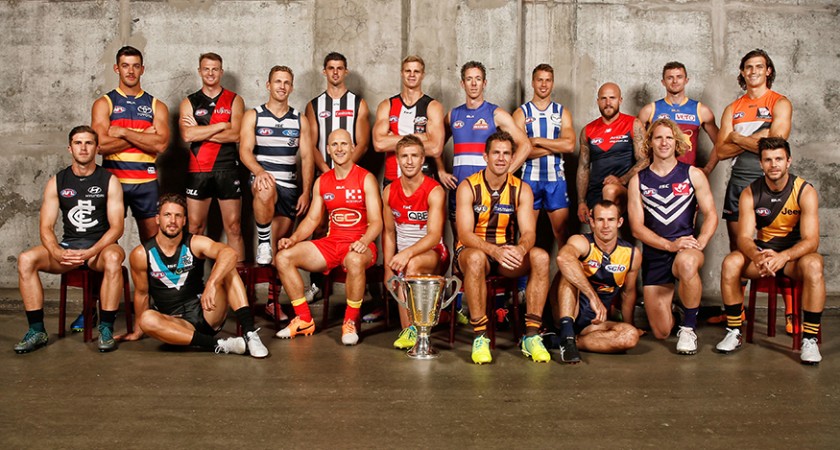 The Australian Football League tonight launched the 2016 Toyota AFL Premiership Season at a function in Melbourne. Please find attached below the speech given by CEO Gillon McLachlan.

Gill McLachlan, March 17, 2016
Welcome everyone to the launch of the 2016 Toyota AFL Premiership Season, a night of promise and optimism, a night that sees us pivot away from the off field world, that can be so pervasive, to the on field, to the stuff that matters. The footy

Standing on the precipice of the season, it gives you time to reflect as well as wonder about what lies ahead.

To celebrate our life members, their greatness, their loyalty, their contribution. Legends like Bill Kelty, one of the most influential men in the history of our game.

To thank Toyota, the greatest car company in the world for partnering with us for their 13th season. Is there a better partnership in world sport – thank you Tony.

To thank all our broadcast partners and sponsors for their ongoing support – we are only here with your incredible support.

To reflect on the fact that our football family has had a tumultuous period, one of the most turbulent in our history. There have been the usual domestic disputes  – Andrew/ Eddie – but there have been some issues beyond the normal family squabbles, beyond our normal ups and downs.

The Essendon supplements case has tested our community, our football family, more than anything we’ve faced before.

The resilience of the 34 players involved will be tested severely this year, as at times will that of the Essendon supporters, but I have great faith in the conviction, strength and loyalty of both groups, that they will get through this year.

Because that loyalty, that conviction, that passion is at the core of our game. We are the most tribal and passionate supporters of any game in the world – one in 28 Australians –  man, woman and child are members of an AFL club.

No game or league in the world can touch that number. No one

Our game is in great shape.

Our crowds, our ratings, our participation numbers are strong.

And beyond the top line metrics, we are, as an industry, making great inroads on our broader strategic goals

Last season net club debt and profitability went the right way collectively for our clubs for the first time in many years. We are getting close to having 18 competitive clubs, both on-field and off.

We are starting to be a game that is played as much by women as it is by men.

And we are focused on making all Australians, no matter their background, feel this is their game.

This is why we’re investing in the National Women’s Competition, in club academies, in multicultural and indigenous talent concessions.

And now, we have a new $2.5 billion broadcast agreement which we must invest for generational returns, not just the next 6 years. To secure our game for decades.

It may also be our biggest challenge, as we are now a bit like a family that won the lottery.

And there will be a lot of views about how to invest, shy and retiring family that we are.

It will be like an episode of Here Come the Habibs.

Investing the fruits of our landmark broadcast deal will be THE story off field for the first half of 2016, but it will be the right debate as it will govern our future. An all you can eat buffet for the Herald Sun for the next 6 months

But if it’s a problem, then it’s a pretty good one

But enough reflection – its time for the footy and what a relief.…

Is there anything better than the start of the season?

The promise, the anticipation, the stories.

We have had a cracking NAB challenge, where my love for Luke Beveridge grew, I re-affirmed my passion for Bucks, and I started to get pretty excited about Melbourne

We have been talking about talent, and rebuilding around talent.

We are talking about the fact that Carlton have rebuilt using the tools of the draft and the salary cap for the first time in their history, with Silvagni, choosing a Silvagni……. and the next potential Silvagni, Jacob Weitering at No1.

And Brisbane, took Josh Schache at 2, son of former Brisbane Bear Laurence Schache, and already there are comparisons to Jonathan Brown.

Jacob and Josh are former Vic Country teammates, they are likely to play on each other for a decade, they are the future of our game. Both justified their selection and their expectation in the Nab Challenge.

Some of the talent is just as exciting but is coming from less obvious routes.

Mabior Chol arrived at Richmond from Sudan via Egypt then Queensland at the Brisbane Lions Academy, via the Rookie Draft.

Doesn’t everyone love those academies.

Mason Cox is equally unlikely. An American basketballer with an Engineering degree that landed at Collingwood as an International Rookie after starring in a talent screening trial in California.

And we have been talking all summer long about trades – especially the big trades.

In Geelong there is Danger Mania, the raging bull from Adelaide returning to have Geelong supporters talking about flags again.

And while the crows were sad for a while, they got Wayne Milera from the Danger trade and now it seems the Adelaide fans are smiling again, now they have the next Andrew McLeod. No pressure at all Wayne….

They talked about big trades at St Kilda for about 15 minutes …yep that wasn’t ideal – then they went back to talking about what they have always talked about – Roo. This year he will play his 300th  game and his 200th as captain, becoming only the 5th player in history to captain 200 games along with  Dick Reynolds, Ted Whitten, Sticks Kernahan and Michael Voss. I think that says enough.

Incredibly it may not be as remarkable as Brent Harvey who, barring injury (or suspension – and with Boomer this is probably more likely!), will break Michael Tucks remarkable games record in rd 19. That will be something extraordinary, a tribute to talent and resilience.

And everyone wanted to trade for Tom Lynch the young star centre half-forward from the Suns, but they won’t be able to because it looks like he will now re-sign, stamping himself as the face of Gold Coast, like Jeremy Cameron did at GWS last year. Two young key forwards, hopefully the long term futures of these expansion teams.

And Melbourne feels ready this year.….unless of course ….you speak to Melbourne supporters.

But they feel different….even…balanced – maybe it’s because they have the first female coach in their history, Michelle Cowan, or employed the best female player in Women’s history, Daisy Pearce.

There is a female revolution going on, and im not sure we can over-estimate how big it will be if Eleni Glouftsis becomes the first woman in history to Field Umpire a senior game……get it done Wayne…obviously on merit.

And Kochie thought Port could win it last year, and he is confident again ….despite having one less on his list than Essendon……but so are the people behind the scenes at Port like 45 year boot studder and Jack Titus Award winner Alf Trebilcock. Alf has been volunteering his time to Port since 1968, if anyone deserves another flag, its Alf!

It’s not just Bob and Alf who are confident.

The two CEO masters of the club dark arts have already secured their slices of greatness, the kung fu panda at West Coast Trevor Nisbett, and the Sydney sage Andrew Ireland. But it’s been a while, and these two enduring faces of our game have their clubs perfectly positioned to make a serious assault on 2016.

The reality is that most supporters deep down think they can win it, and this is why coaching is the toughest job in our business.

There are always stories around our coaches, but three stand out.

John Worsfold is truly in unchartered territory, and on behalf of so many of us, thank god we have someone so calm and experienced coaching the club going into such an extraordinary year.

Ross Lyon knows pressure well. One of the outstanding coaches and people of our game, five prelim finals, four grand finals, Fremantle supporters are desperate to take that last step, and Ross carries their expectations.

And then there was one. There will be many on field stories this year, but none bigger than that of Alastair Clarkson and his Hawks.

Only four men in history have coached more than four flags, and Jock McHale stands alone as the only man to coach four in a row. Clarko is in rarified air already, but running down a record that has stood for nearly 90 years that eluded even the great Leigh Matthews  – who said dynasties are boring …..

These are just some of the stories and the people who set the stage for  season 2016.

Our football family. Our soap opera

We are all replete with possibility and hope. The leaves are changing colour, the days grow shorter, we are just seven days away, almost to the minute, from that hard, sweet-feeling Sherrin thudding into the middle of the mighty G, to that extraordinary roar, for the first time this year.

The possibilities are endless. We are ready.

So from Cat man, Joffa, me….and millions of others, good luck to everyone, thanks for your support- and we will see you at the footy!!!