179 goals and counting for Charlie Cameron 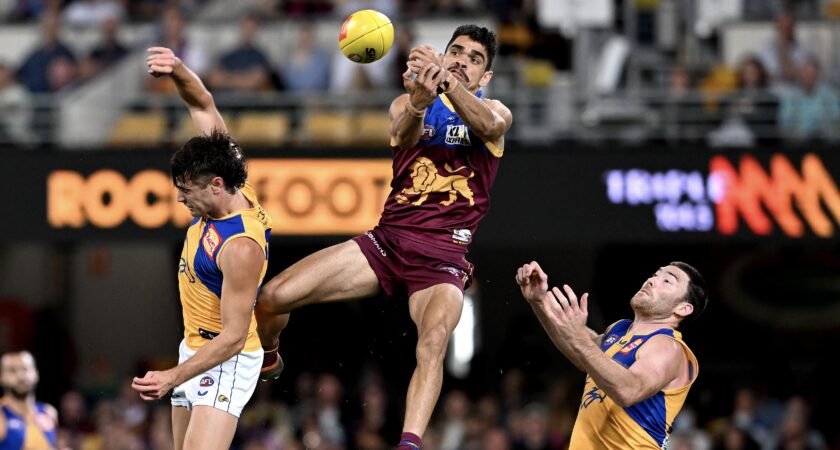 Twenty-four players have kicked 100 goals in the AFL in the last five years. Only two of them are genuine small forwards. Brisbane’s Charlie Cameron and Sydney’s Tom Papley.

And with 19 goals this season the Lions excitement machine is 8th on the goal-kicking list behind seven big forwards. Collingwood’s Jack Ginniven is next among the small forwards with 17.

They are statistics that will take on a critical importance with the Lions in the coming weeks as they tackle a period without Joe Daniher and Dan McStay, and with a degree of uncertainty over Eric Hipwood and his return from a long-term injury.

It’s almost as if Cameron has known of the task ahead of him and the extra responsibility he will carry while the big forwards are missing, lifting his output in recent games.

He’s gone 4-3-4 in the last three weeks and had his best game of the season last Saturday night, when the Lions hammered a depleted West Coast by 75 points at the Gabba.

He earned seven votes in the AFL Coaches Association Player of the Year Award, sharing second billing in the game with Lachie Neale behind best afield Hugh McCluggage.

Especially pleasing for coach Chris Fagan, and Cameron himself, was the fact that three of his goals against West Coast came in the first half when the game was still a contest. One in the first quarter and two in the second.

Prior to Round 8 he had only kicked one first-quarter goal and three second-quarter goals in the first seven rounds, prompting the now 27-year-old 159-gamer to publicly set himself to hit the scoreboard more in the early part of games.

Cameron was the only Queenslander to poll in votes for the AFLCA MVP award in Round 8, but there was good news outside the AFL for Port Adelaide Queenslander Charlie Dixon.

Coming off recurring ankle problems and multiple surgeries, he returned in the SANFL and got throughout without any problems, playing 75% of game time and kicking one goal.

Coach Ken Hinkley has stopped short of guaranteeing Dixon a spot in the Port side to play North Melbourne in Hobart on Saturday afternoon, but the fact that the Port side has a bye in the SANFL helps his prospects.

The same predicament faces the Lions over Hipwood, who hasn’t played since Round 17 last year, with the Lions Reserves also having a bye this week.