Decade of service for Burleigh’s Larkin 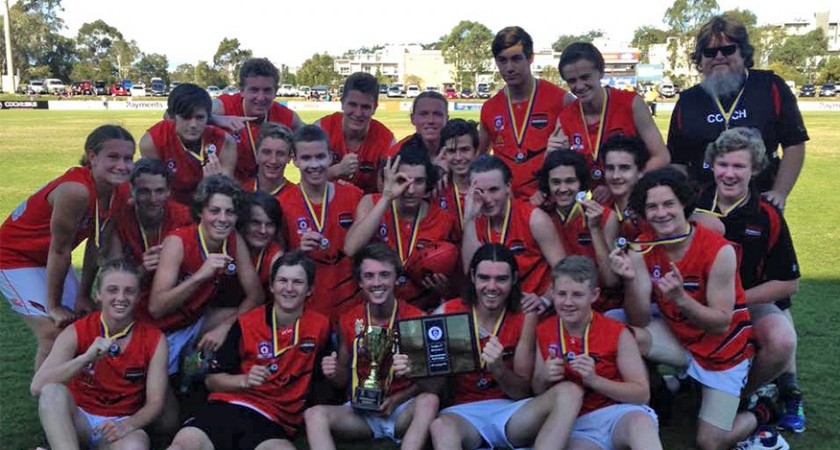 It stated with a dad following his eldest son to a game of footy; it’s resulted in over a decade of service.

Chris Larkin, the 2015 AFL Queensland Youth Coach of the Year, is as loyal as they come to the Burleigh Football Club, pitching in wherever he can as his three sons progress through the ranks.

Coaching, team managing, sitting on the committee and everything in between, Larkin has been a stalwart for the Bombers junior club.

“It started with my eldest son quite innocently. He had spent a year playing soccer, of which I was coach of his under seven team, but probably seeing AFL on TV, and me having played AFL as a youngster, we thought we would give the local club a go,” Larkin said.

“I went along , and there was another dad who encouraged me to get involved, and I did… and 10 years later I still am.”

Coaching is a caper that feels comfortable for Larkin, who pinpointed one area as key.

“I had done a little bit of coaching before hand through schools. I’m a high school teacher, and had been involved in coaching touch football and soccer. I had done a lot of work with kids, so that part of it I suppose came fairly naturally,” he said.

A few months after winning the Under 16 premiership in 2014, the Bombers were starring down the barrel of not getting a team together.

That’s when Larkin went to work once again.

“We lost more than half the team. They went either to other clubs, like in the QAFL, and some went directly into senior playing groups. So we went from having tremendous success in 2014, to struggling to field a team in 2015,” he said.

“I found myself coaching. It wasn’t something that I initially put my hand up to do, but with my middle son in that age group I wasn’t going to see him or his mates unsupported.

“As it turned out, we played in division 2 of the under 17 competition, and ended up winning the premiership which was a real credit to the boys. They were so respectful to one another no matter where they came from. I was really proud of them all and the way they played footy.

“I love winning, we all love winning, but there was something more important. We were very fortunate, the way the gods smiled on us. The boys played in the right spirit, and were rewarded for it.”

While all that was going on, Larkin was still able to take a step back and watch on as his eldest son, Liam, debuted in the Burleigh senior team.

“He has learned so much this year, surrounded by some good people. His passion is rubbing off on his little brothers now,” he said.

So what keeps the football fire still burning?

“I ask myself that question quite a bit. I suppose it’s a bit selfish, in that I have three sons, Liam, Bryn and Dominic, so it’s an opportunity for me to share my love of sport with them,” Larkin said.

“But also, seeing kids who had never played division 1 football, and in the earlier years probably struggled to grow into their bodies a bit; to see the satisfaction in their face as they have grown into young men and grown in confidence to be a integral part of a successful team, that for me is the thing that makes me keep going back to training.”

It was a simple sentiment Larkin used to sum up his time at Burleigh, but one that speaks volumes about his selflessness.

“It’s really a privilege, to be able to spend that time with all these kids, watching them grow up to be fantastic people,” he said.

As for what the future holds, don’t think it will just be the kids who transition into the Burleigh seniors.

“I don’t see that I have a role to play coaching, but there are so many people involved in getting teams on field in that senior area. As long as my boys are playing I will certainly give them my full support and help out where I can as time goes by.”

Junior sign on day details
Catching up with Hippy and Keaysy