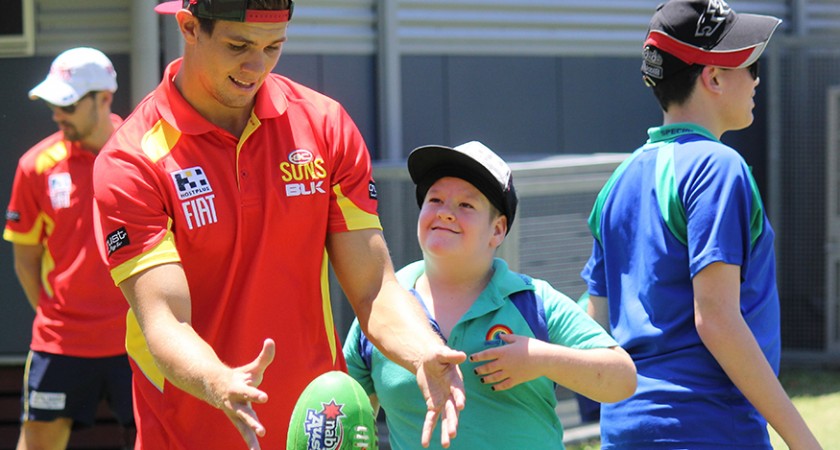 The AFL has announced locations and dates for the 2016 Australia Post AFL Community Camps which will see the 18 AFL Clubs visit both metropolitan locations and regional centres.

The 2016 Australia Post AFL Community Camps will be held in February and March of next year with over 750 players from each AFL Club spending two days meeting fans and developing stronger links between Australian Football and the community.

In recognising that grassroots football and the community are the lifeblood of Australia’s Game, the 2016 Australia Post AFL Community Camps will have a renewed focus on school visits while also undertaking AFL super clinics and training sessions in the community and for local coaches.

AFL General Manager Game and Market Development, Simon Lethlean said the Australia Post AFL Community Camps is the first major event on the 2016 AFL calendar and allows players to give back to local communities.

“Before the first Sherrin is bounced in season 2016, the Australia Post AFL Community Camps start the year with players visiting over 60 locations right across the country allowing them to share their collective passion for the game by bringing people together and promoting participation at the grassroots level.

“More than ever before, we are seeing players drafted from all corners of Australia so it’s important that the next generation get the chance to meet their heroes and maybe even take part in an AFL super clinic run by them.

“But overall, the most important people in our game are no doubt the fans and the camps are a chance for the clubs and players to recognise the support they receive first-hand.

“During the 2014/2015 camps, over 95,000 school students had visits from AFL players and in 2016 we’re looking to exceed this number as the AFL Clubs concentrate on a dedicated school blitz, while also taking part in the traditional AFL super clinics out in the communities amongst other activities,” Mr Lethlean said.

Australia Post General Manager Community Relations, Andrea Pearman said: “The Australia Post AFL Community Camps provide access to our national game for communities and individuals who may not  have  the opportunity to enjoy everything the AFL and its clubs has to offer.”

“This year the camps will include metropolitan areas from all around Australia and will continue to bring people together in a common interest – whether they are playing, watching or supporting sport, all are welcome.”

Currently in its thirteenth year, The Australia Post AFL Community Camps have reached a total 971,716 students across 5,050 school visits since the program’s inception in 2003.

Whetton gets AFL call up
Magpies swoop on Staker for 2016