16 Queenslanders in the mix for finals 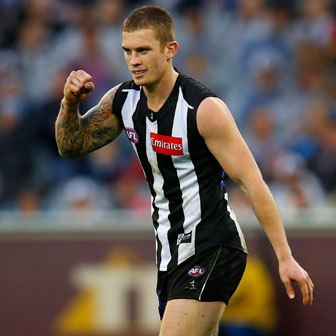 The 2013 AFL season has been a good one for Queenslander’s, with 45 players across the state representing 14 clubs throughout the national competition.

Sadly, not all of them will feature in the finals this year but Queenslanders will still have the chance to cheer on 16 of our finest exports during September.

Hale, a Broadbeach junior who was recruited by North Melbourne with pick seven in the 2001 National Draft was traded to Hawthorn in 2010 and will play a key role in their push for back to back Grand Final appearances.

Osborne is recognised as one of Hawthorn’s toughest players, who was delisted and then redrafted in 2012 after rupturing his anterior cruciate ligament (ACL). Originally recruited in the Rookie Draft from Labrador in the same year as Hale, Osborne has forged a successful 168 game career as a small forward and was a member of the 2008 Hawthorn premiership side.

After being named vice-captain of the 2007 AIS Academy squad, Whitecross, a Kedron junior who was recruited from the Zillmere Eagles with the 29th pick in the 2007 National Draft, has become a key member of Hawthorn’s side in the past few years. He unluckily missed the 2012 finals series with a ruptured ACL, and will be hoping to help Hawthorn go one better than their Grand Final appearance last year.

Sydney’s Kurt Tippett was the subject of much attention throughout the 2012 off-season as he made his way from Adelaide to the Swans, but has shown how much of a key he is in Sydney’s September chances since his return. Tippett was originally recruited from Southport with the 32nd pick in the 2006 National Draft before transferring to Sydney.

Jesse White, another Southport junior who was selected in the 2006 National Draft, initially struggled to break into the Sydney side as he battled with inconsistency. Since then he has developed into a key member of a Sydney side which has been decimated by injury. He was a Rising Star nominee in 2009, and has had his most consistent year of football in 2013, featuring in all but two of Sydney’s last 13 games.

Saturday’s second qualifying final will see Fremantle’s Lee Spurr travelling to Simmonds Stadium to attempt what 42 out of the last 43 sides have not managed to do, beat Geelong at home.

Originally from Morningside, Spurr was a mature age selection from SANFL side Central Districts in 2011, and was taken as the eighth pick in the 2011 Rookie Draft before being elevated in 2012. Spurr has developed into a key member of Fremantle’s back six, adding 20 games to his career tally which now stands at 33.

Saturday night’s first elimination final will see Collingwood, who has the most Queensland representatives of any side in the finals, taking on Port Adelaide at the MCG.

Dayne Beams has become a star of the competition since being recruited by Collingwood with the 29th pick in the 2008 National Draft. Beams, who was recruited from Southport, already has an impressive CV after finishing fourth in the NAB Rising Star award in 2009 on his way to collecting the Harry Collier Trophy as Collingwood’s best first year player.

The following year, Beams featured in the 2010 premiership win, but it was 2012 that saw Beams emerge as a star. By the end of the season, Beams had developed into an All-Australian wingman while winning his first Copeland Trophy as Collingwood’s best and fairest.

Ben Hudson has become one of the great journeymen of the AFL, who after attempting to retire twice, is now with his fourth club at the elite level. Hudson was a latecomer to football, playing basketball until 2000, when he was convinced to try footy while at the University of Queensland.

After winning Mount Gravatt’s best and fairest in 2001, Hudson moved to Victoria where he was drafted from Werribee as a mature age recruit by the Adelaide Crows. Since then he has featured for the Western Bulldogs and Brisbane Lions before settling as a ruck coach and occasional player at Collingwood.

Lachlan Keeffe is a Gympie native who boarded at Marist College in Ashgrove before moving to Victoria where he was signed as an unregistered player by Collingwood in the 2009 Rookie draft. After playing 20 games with Collingwood’s VFL team in 2009, Keeffe was rewarded with a rookie upgrade in 2011. He has played seven games for Collingwood in 2013, and has the potential to develop into a long term key position prospect.

Adam Oxley was a Queensland under 18 representative in both 2010 and 2011 but was passed up both years in the draft. However, Collingwood took the chance on him after taking him as a Rookie selection in the 2012 Draft after he had plied his trade for Redland’s in the NEAFL. He has played two games for Collingwood in his debut season and shapes as an exciting prospect for the future.

Josh Thomas has battled injuries ever since he was drafted by Collingwood in the 2009 National Draft. Thomas represented Queensland in the 2009 National Championships and was offered a contract by the Gold Coast after featuring in 11 games for their TAC Cup side, but he elected to enter the draft. Collingwood have been rewarded for their persistence with Thomas, as he has enjoyed a successful debut season in 2013 playing 18 games across the year.

Peter Yagmoor was a 2012 Gold Coast zone selection who was then on-traded to Collingwood in exchange for pick 47 in the National Draft. Yagmoor was recruited from Morningside after previously playing his junior football for Kenmore. He was born and raised in Cairns before moving to Brisbane in 2008.

After being born in New Zealand, Brent Renouf moved to the Gold Coast at an early age and began to pursue a career in football. Renouf, who played his junior football with Surfers Paradise, was recruited to Hawthorn from Southport in the 2006 National Draft. Renouf has had an injury plagued career and was traded to Port Adelaide in the 2012 Draft but has only featured in 15 games since his arrival.

Daniel Stewart played in the TAC Cup for the Eastern Rangers before moving to Labrador in the AFLQ competition. From Labrador, Stewart moved to North Adelaide in the SANFL in 2008 before being drafted by Port Adelaide in the 2009 Rookie Draft. He has played 36 games since his debut in 2010 but only one of those has been in 2013.

In the second elimination final which takes place on Sunday, two Queenslander’s will take to the field hoping to guide Carlton into the second week of the finals.

Tom Bell was taken as a mature age selection after a breakout year with Morningside in 2011. Bell also represented the Queensland under 21 side during 2011 while playing a handful of games as a top-up player for the Brisbane Lions reserves. After being taken in the 2012 Rookie Draft, Bell’s fitness and tenacity has seen him become a regular member of Carlton’s senior side. He has played 14 games across his two seasons with Carlton.

The final Queenslander to feature in finals football is Carlton ruckman Shaun Hampson. Hampson was another latecomer to football, and did not take up Aussie Rules until 2005 when he played for Mount Gravatt in the AFLQ. Hampson was drafted with Carlton’s priority pick in the 2006 National Draft and has played 63 games since his debut in 2007.

With all this considered, the first week of the 2013 finals series will hold significant interest for all concerned with Queensland football as at least one Queenslander is set to feature in each match in what is shaping as a cracking week of football.