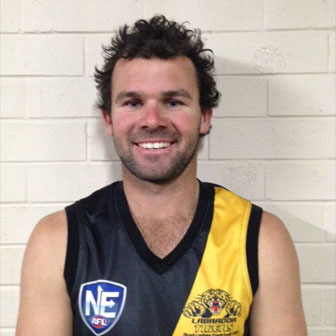 Originally a Rugby League player, he started his AFL career at St.George in Sydney under Craig O’Brien.

Featherstone was recruited to Labrador in 2005 by then Senior Coach, Mark ‘Fridge’ Roberts.

Club President Steve Parker described Todd Featherstone as “the ultimate clubman” in is time at the Tigers.

Todd’s Company, Shepstone Constructions, are a current sponsor of the Tigers.

In his 9th season at the club, Featherstone has enjoyed great support from his wife Jayde and his 2 biggest fans, daughters Scarlett and Matilda.

“The Labrador Footy Club has been fantastic for my family and we have enjoyed every minute of it,” Featherstone said.

Featherstone will saddle up for the club again in 2014, still hoping for the ultimate team success at Tigerland.

Joining Featherstone in his milestone game at Cooke-Murphy Oval this Saturday will be Michael Doyle, who will play his 100th Senior Game.

Originally from the Queanbeyan Tigers, Doyle arrived in 2006 and has been a consistent performer over the journey, with 2010 his best season.