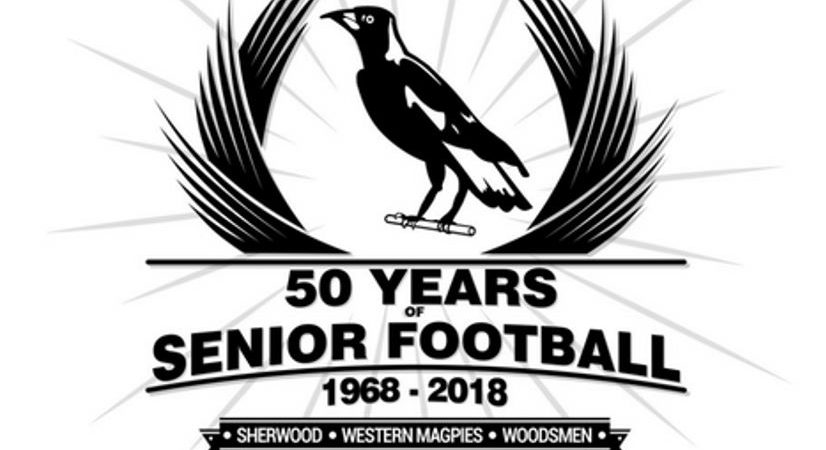 Brisbane’s western suburbs will raise the bat this weekend as Sherwood and the Western Magpies celebrate 50 years of senior football as the side host Sandgate at McCarthy Homes Oval, August 18.

To honour the landmark, the Magpies will don a special commemorative guernsey in the QAFL and QAFL Reserves matches against the Hawks.

The guernsey features the names of all 980 Magpies’ players and coaches who have worn the black and white stripes at senior level over the past half-century.

A function will also be held after the senior QAFL game to celebrate the milestone.

Throughout their history, the Magpies have won 14 senior premierships across a number of football divisions, including the club’s golden age of the 1970s and early 1980s where they won eight consecutive premierships in a row in the SQAFA.

Sherwood DAFC was originally formed in 1956 however it offered only junior football during its formative years.

With so many players wanting to continue their careers, it was decided to field senior teams and in 1968, the Magpies formed their first ever senior team.

After finishing fifth in their first campaign and second in their sophomore season, Sherwood made the jump to SQAFA level in 1973 and went on to levels of success that are still yet to be replicated.

The club won a premiership in every season from 1975 to 1982 and following their golden years, moved to the QAFL in 1983 before moving to the Gold Coast competition from 1988-1991.

Just one year removed from their premiership triumph, the Warriors went into recess during the 1997 and 1998 seasons – the first time in 30 years the club wouldn’t field a senior team.

A band of senior players regrouped and reformed the Magpies of old under the current Western Magpies name.

Since, the club have continued to climb up the AFL Queensland divisions including stints in the South Queensland League, the old division one and two competitions and the QAFL, where they remain today.

During their tenure, a host of legendary Queensland footballing figures have played for the Magpies, including 1983 Grogan Medallist, Bill Peirce, three-time club best and fairest winner Steve Rippon and legendary coach, Lindsay Jacob.

In total, 11 players have been picked or drafted from the Magpies to the VFL/AFL.