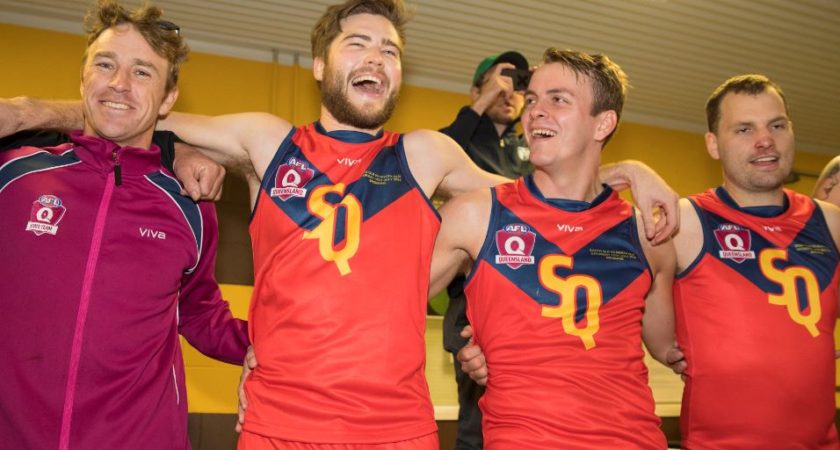 South Queensland has flexed its regional muscle with a record-setting 13-point win over their North Queensland rivals in the annual representative showdown at Graham Road on Saturday evening.

The Danny Craven led Southern team made the most of their opportunities inside 50, emerging winners in the 55 to 42 point affair.

In doing so, South Queensland became the first side to win three straight contests, while also etching their name in the record books as the first home side to taste victory.

Speaking after the game, Craven was a humble winner and credited the North Queensland side for their efforts.

“It was a relief to win in the end. This North Queensland outfit was probably the toughest we’ve had in the last three years and we thought we were fortunate to keep our noses in front all night,” Craven told aflq.com.au.

“I think we all take pride as competitive sportspeople to try and win every time you step out.

“We all can take pride in the fact that we’ve won three in a row. Given this program runs only once a year, you like to come out on top if you can.

“It’s always good to get ahead on the ledger. We’d rather be in front than behind and certainly to break the duck with the win on home soil was nice as well.”

The game’s opening minutes saw North Queensland produce several inside 50s and subsequent scoring opportunities, yet it was Maroochydore’s Mitch Scholard who drew first blood in the game.

The South Queensland side continued to have chances at the goal face through Zac McLean, Matt Schlein and Rhan Hooper, yet the side mustered just a string of behinds leading into the first break.

After failing to score in the opening term, the away side created the first scoring opportunity of the second term, a behind by way of Cairns Saints’ Cade Wellington.

North Queensland’s AFL contingent combined to manufacture the side’s first major of the day as Aaron Davey capitalised with an opportune toe-poke after Brett Meredith set the ball to the top of the goal square.

Matt Schlein and Josh Filo responded with goals for South Queensland, re-establishing the lead back out to 12-points.

At half-time, South Queensland had firmly established themselves in the box seat for the win with a 14-point lead but it was evident early in the third term that North Queensland weren’t going down without a fight.

The Northern side, which featured 15 players from the AFL Cairns competition, found themselves on top of the centre clearances, despite former Sydney Swan Brett Meredith receiving close attention from Jack Collings.

Their hard work paid off through Skip Gribbon, who emerged from a forward 50 stoppage to snap truly and cut the lead to ten points.

South Queensland’s counter attack paid dividends against the North Queensland press, culminating in Mitch Scholard’s second of the quarter and third of the game.

Josh Filo’s second major opened up the scoring in the final term and with the lead now sitting at 20-points, the challenge was made far more difficult for Brad Cooper’s northerners.

Skip Gribbon and Mitch Scholard continued to one-up each other as the game neared toward a conclusion; the pair both kicking four goals in the game.

The pair combined for seven second-half goals and both finished the game with four majors and shared honours as the showdown’s leading goal kickers.

Rhan Hooper all but ensured a South Queensland victory with a composed set-shot – a notion only driven home minutes later.

South Queensland workhorse Josh Filo was announced the Ron Davidson Medal as his side’s best player in the game.

Skip Gribbon was awarded the Wayne Jackson medal for the best North Queensland player in the game after his four-goal effort.

The win for South Queensland was even more impressive given the circumstances the side found themselves in.

As little as four members of last year’s squad, including Head Coach Craven, returned for this year’s instalment as the team placed even higher responsibility on their younger core.

“We had a new batch this year. I think we had 19 news players to that group so it was good to get them exposed to representative footy, Craven said.

“It’s always good get the win in those circumstances in terms of motivation for the group.”

Among those youngsters to perform was 19-year-old defender, Jason Kennedy, who claimed the match-ball as the South Queensland player who embodied the concept of the game best, keeping North Queensland spearhead Kye Chapple well below his usually lofty influence.

“We thought he matched up well on him and turns out it worked well.

“He was an excellent player tonight and kept Chapple to zero goals.”

Like Kennedy, Ezekiel Frank took away the match ball as the North Queensland player who best embodied the competitive spirit of the game.

AFL Queensland Football Operations Manager, Barry Gibson, was pleased by the spirit in which the game was played and the collective efforts of everyone involved.

“It was great to have both coaches returning. I think for continuity, that’s really important and it helps to build trust and respect of the players.

“We bring a lot of people from a lot of regions to play so the logistics of this program are challenging, but I think everyone did a fantastic job.”

Footy is back in regional Queensland with Capricornia releasing their fixtures for a new look 2020 Season. All Clubs will return to play on Saturday July 11,... [more]