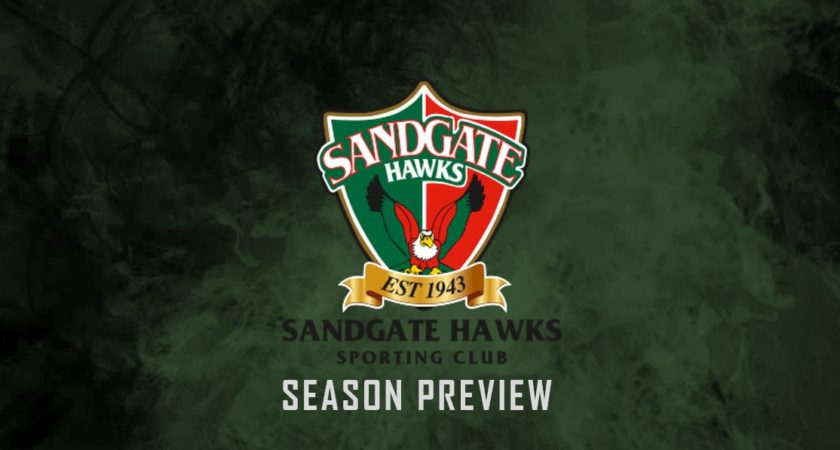 One simple throw-away line from coach Jared Marsh perhaps best summed up life at Sandgate heading into a new season of QAFL.

The Hawks are realistic in their plans for 2019, the club driven by a mantra of continuing to develop young talent in the hope that as players mature they will get better and better.

When asked about turnover of players over the off-season and how many experienced performers the Hawks have lost, Marsh said: “They’re all too bloody young to retire, so we haven’t lost too many.”

Which means that a big percentage of the playing roster will be back in the green and red again this year.

The main losses are Dan Affleck, who has hung up his boots because of work, and Aspley NEAFL listed pair Zac Buechner and Lachlan Harris. Buechner has returned to Tasmania and Harris to Victoria.

The two played a majority of the 2018 games with Sandgate and will be missed, particularly key defender Buechner.

But the Hawks have added new faces, including Jayden Battaglene, a midfielder from East Ringwood, Dom Paino, a tall forward from rivals Wilston Grange, and one of their own, small forward Dan Haynes, who is back from North Heidelberg.

“Our thing is we’re trying to provide a pathway for northern Brisbane kids into QAFL,” Marsh said.
“They’re here because they see opportunities for them at Sandgate.”

Marsh said the Hawks are mainly focussed on youth – again – and the big hope is that many youngsters blooded last year will advance and become regular first graders.

“We’ll get a bit of development out of most players and we’re expecting most of our growth will be in the maturing of a lot of kids we put through last year,” he said.

“We know it’s going to be a lengthy rebuild but we’re ready for it. They show you just enough for you to love them to keep coming back because you know there’s something there.”

An indication of the turnover of players at Sandgate last year can be gauged from that fact that, of the 22 players selected for the opening round against Wilston Grange, only nine survived for their final round match against Morningside.

Sandgate have had an uncanny habit of causing major upsets in the past two seasons.

To end their 2017 campaign the Hawks thrashed eventual premiers Palm Beach Currumbin by 96 points in the final round.

Last year, in the fifth round, they beat Morningside (preliminary finalists) at Morningside by two goals for their only win of the season.

With best and fairest and co-captain Jordan Harding set to be a leader again, the Hawks are confident they can start creeping up the points ladder and spring more surprises in 2019.

“Because we’re still developing I don’t think we’re at a point where we’re looking at top three,” Marsh said.

“That would be great but we want to win a few more games and win some respect from opponents.
“That’s because it is a pretty historical and proud club at Sandgate.”

Sandgate have a bye in Round 1 before opening their 2019 premiership campaign with a match against premiers Palm Beach Currumbin at Lemke Road Oval on April 13.