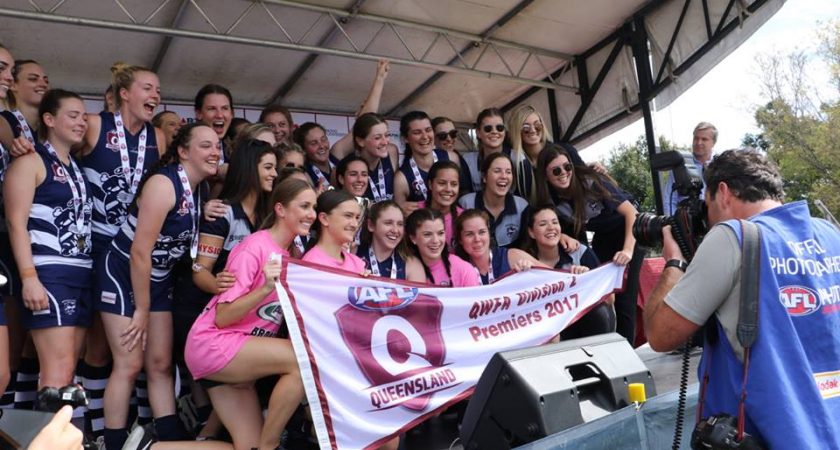 The QWFA Division 1 fixture, which comprises of a 16-round regular season, kicks off on April 14, and will see eleven teams compete for the premiership flag.

A six-team finals series will decide this season’s premier, with the Grand Final to be played on the last weekend in August, with the venue and time to be announced later.

After their 21-point victory in the 2017 Grand Final, reigning premiers Bond University have been promoted to the QWAFL and cannot feature in a Grand Final rematch with Yeronga South-Brisbane. Yeronga however, will have the chance to relive their thrilling four-point preliminary final victory over Aspley as the Devils and Hornets face off in Round 2 at Leyshon Park.

The new season sees 2017 QWFA Division 2 premiers Broadbeach promoted, alongside runners-up Kedron, who they defeated by 19-points in the big dance.

The competition’s newest teams will both host their first home games in Division 1 in Round 2, with Broadbeach facing Coolangatta-Tweed and Kedron squaring off against the University of Queensland. A showdown between the two sides will take place in Round 14.

A league overhaul in 2018, with seven additional teams entering the competition, sees the existing QWFA Division 2 split into the North and South divisions.

The North division sees the Ipswich Eagles make their competition debut in 2018 and will host their first home game in Round 3 against Sandgate.

Griffith Moorooka will also re-join the competition – the first time the Roosters have fielded a women’s team since the 2015 season.

In the South, Alexandra Hills, Mt Gravatt and Robina will field teams for the first time, alongside Morningside and the Surfers Paradise Griffith Demonettes, who return for first time since 2012 and 2009 respectively.

The Grand Final for both competitions are scheduled for the final weekend August, alongside the QWAFL and QWFA Division 1 on the same day with the venue and time to be confirmed closer to the date.

After a preliminary final appearance in the 2016 QWAFA, followed by a winless 2017 season in Division 1, Jindalee will be focused on rebuilding a strong female pathway in the competition, including their new agreement with the University of Queensland.

The Round 5 clash between Hinterland and Pine Rivers at Palmwoods will form a triple-header along with the clubs’ senior and reserves teams in a Cancer Support fundraising day.

A whole competition bye round will take place in the South division across June 9-10, in between Rounds 6 and 7.

Across both the QWFA North and South Divisions, traditional season highlights will again take place, with Umpire Appreciation Round falling in Round 2; May 5 and Indigenous Round in Round 6; June 2.