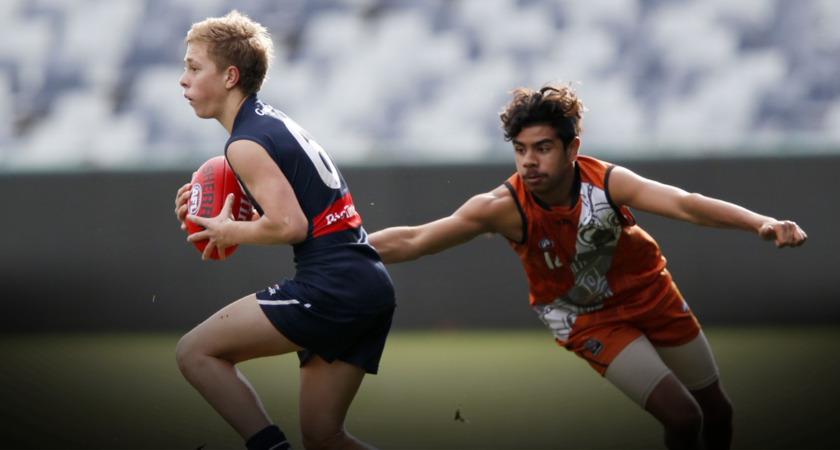 Selected by NGA Managers and AFL Club recruiters, following a state talent program and talent identification camp, the respective squads of 25 young men have been chosen based on school attendance, leadership skills, and football ability.

Queenslander Kaleb Baines has been selected to represent the state in the 2019 Rio Tinto Flying Boomerangs squad, with Jake Rogers and Emmanuel Kanda selected for the 2019 World Team.

Supported by Rio Tinto, the AFL Flying Boomerangs program is a personal development and leadership program for Aboriginal and Torres Strait Islander men aged 14-16 years old. Meanwhile the World Team is made up of the best upcoming AFL multicultural players from across the country.

Baines, Rogers and Kanda will fly to Melbourne on July 7 for a week-long camp where they will undergo a number of cultural, education and football training sessions, before going head-to-head in two exhibition matches at Trevor Barker Oval on July 9 and July 12.

“The Rio Tinto AFL Flying Boomerangs and World Team programs are vital parts of the AFL talent pathway system and provides a great platform for the next wave of Aboriginal and Torres Strait Islander and Multicultural talent to develop not only their football skills, but leadership skills which they can take back to their local communities,” Mr Dillon said.

“We’ve seen a number of elite AFL players come through these programs over the years and we look forward to witnessing the next stage of development for these players, coaches, and umpires when they arrive in Melbourne next month,” Mr Dillon said.

“Each player has hit the targets set by the AFL Queensland talent department and the AFL,” Mr Yagmoor said.

“I’m sure they will do Queensland proud.

“It will be a fantastic week for all of the participants as they will learn about AFL, culture and life experiences.”

Rio Tinto is the principal partner to all the AFL’s Indigenous Programs. Rio Tinto is one of Australia’s largest employers of Indigenous people, employing some 1500 Aboriginal and Torres Strait men and women across the nation.

See below for a list of this year’s squads: