Queensland teams win back to back for the first time ever 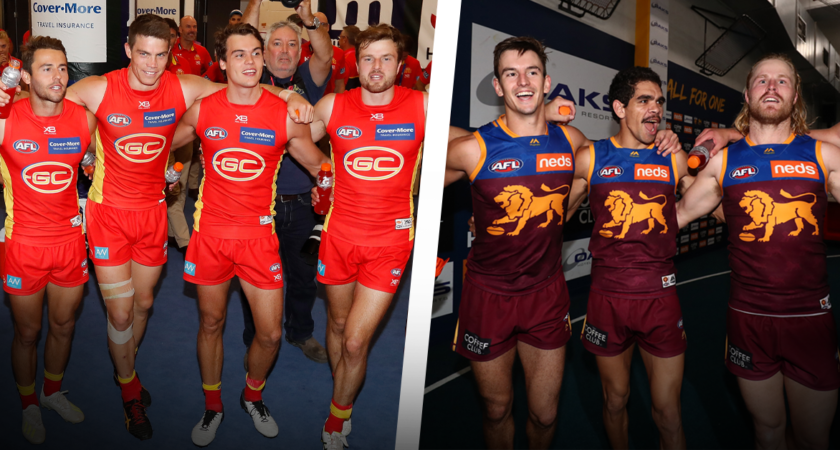 Eric Hipwood and Alex Sexton awoke this morning as poster boys of a special weekend in Queensland football history.

Hipwood kicked an equal career-best six goals as the Brisbane Lions beat Port Adelaide by 17 points at the Gabba, and Sexton, in his 100th game, kicked two goals and was a standout performer as the Gold Coast Suns beat the Western Bulldogs by five points.

It was the first time ever that the two Queensland clubs had both won on consecutive weekends.

In another layer to the most unlikely of statistics, the Queensland record could so easily be 6-0, with the Suns having lost by a point to St.Kilda in Round 1.

Also, if Fremantle had not hung on to beat St.Kilda by five points in Perth yesterday the two Queensland sides would have been in the top eight on the AFL ladder for the first time.

As it is, the Lions, second on the ladder, enjoy a ranking they have not tasted since Round 4 2010. And the Suns, with a 2-1 record, have matched their best opening of 2016 and 2018 in a year in which some cynics suggested they would not win a game.

Privately, too, it won’t have escape the attention of AFL officials that the good form of the Lions and the Suns has come at a time when the Queensland NRL teams are struggling. The Broncos, Cowboys and Titans are a collective 2-9, and one of the two wins was by the Broncos over the Cowboys.

Hipwood was a standout in his 55th game at the Gabba on Saturday night as the Lions came from 10 points down midway through the final quarter to beat the previously unbeaten Port Adelaide.

He kicked three goals in the first quarter, had five by halftime and iced the win with the penultimate goal of the night from long range at the 33-minute mark of the final term.

His six-goal bag equalled his best of six against Carlton at the Gabba last July.

The 21-year-old Sunshine Coaster, now with 85 career goals, is one of 13 Queenslanders who have kicked six or more goals in an AFL game.

It is a very good trivia question for historically-minded football followers.

The first, and one of the tougher ones, was Ken Grimley in 1957 when, in his second of just nine games for Fitzroy, he kicked six against Geelong at Kardinia Park.

Long-time Lions fullback Daniel Merrett is often forgotten. He kicked only 70 goals in 200 games, and only five times kicked more than two goals. But he did kick seven goals against the GWS Giants at the Gabba in 2012.

The other one, like Grimley, is tough. He played 12 games for Collingwood in 1984 and kicked a total of 32 goals. In his third game against Sydney at Victoria Park he kicked seven.

Who was it? Former Mayne star Dale Woodhall.

Just as Hipwood will long remember Round 3 of 2019, so too will Sexton.

He kicked two goals  and had two goal assists to go with 13 possessions for the Suns against the Dogs.