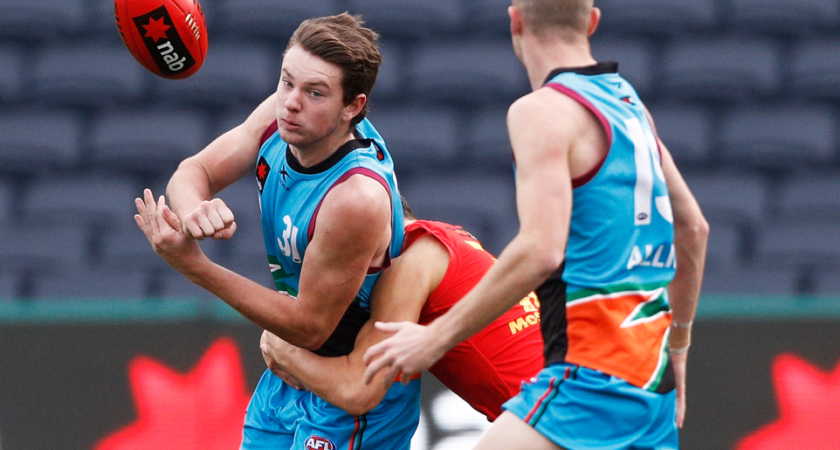 The 22-year-old Victorian caught the attention of the Kangaroos off the back of a superb season at NEAFL level, earning Team of the Year honours and playing a crucial role in the Sharks’ rise to premiers.

Overall, three players and Wilkinson were snapped up by clubs over the two-day event. A further seven Queenslanders were re-drafted by their original clubs or found new homes in either the National or Rookie Draft.

Corey Wagner is set to join Melbourne under the AFL’s new rookie list replacement spots after being delisted from North Melbourne in 2017. He will join the Demons’ list officially on December 1.

Meanwhile, Josh Smith was selected by West Coast  with pick 34 in the rookie draft following his delisting from Collingwood at the end of the 2018 season.

Connor McFayden is no stranger to the Club, having joined the Academy program at the young age of 11 and having donned numerous maroon, blue and gold guernseys over recent years. In 2018, McFayden played five games for the Lions NEAFL side, kicking six goals and averaged 9.4 disposals. He often played as a third tall forward while floating through the midfield. At 190cm, McFadyen is a big and strong ball-winner with an athletic ability to play through the midfield or as a marking option inside 50. He was outstanding for the Allies in the U18 Championships this season and his form was rewarded with selection in the U18 All Australian team.

Bailey Scott found himself in a unique position – able to nominate one of three clubs, North Melbourne, Geelong as a father-son, or Gold Coast as an academy player. He recently elected to nominate North, the club which his father won a premiership with in 1996. Scott has received high-praise this season for his elite endurance and work ethic. With the ability to cover large grounds with ease, the 18-year-old tested well in the endurance running tests during last month’s NAB AFL Draft Combine. For the SUNS in the NEAFL, Scott averaged 22.5 disposals and 6.4 contested possessions, playing predominately through the middle of the ground.

Like Jack Bowes before him, Caleb Graham hails from Cairns and has moved to the Gold Coast to give footy his best shot. Graham is a key defender, who can also swing forward, is a strong contested mark and has the great combination of a long reach and good closing speed. Graham is versatile, being able to play in the ruck, up forward and down back – where he has excelled at NEAFL level in 2018. He reads the ball well and is able to use his athletic frame to take defensive intercept marks.

Having been overlooked in four consecutive drafts, Southport’s Tom Wilkinson was given an AFL lifeline by North Melbourne in the rookie draft. Initially overlooked due to his disposal efficiency, Wilkinson has turned that aspect of his game around this past season, kicking 36 goals from just over 65 per cent accuracy. His 2018 performances earned Wilkinson a spot in the NEAFL Team of the Year where he rated elite amongst the NEAFL competition for goals (36), accuracy (65.5%), forward-50 tackles (1.5), marks (1.6), score assists (1.6) and contested marks (0.7).