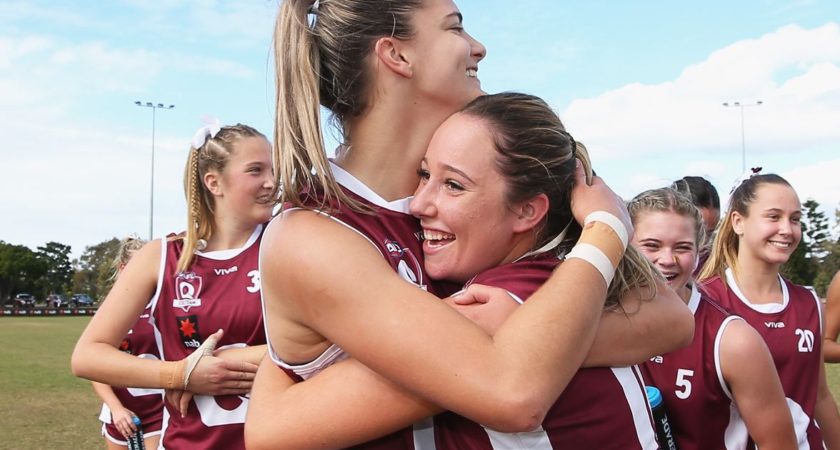 Queensland has produced its first ever win over powerhouse Victoria Metro in Round 2 of the NAB AFL Women’s Under-18 National Championships, defeating the southern side by eight points at Broadbeach.

But this time, the Queenslanders made sure the record books would be re-written with a complete four-quarter performance following their Monday loss to Victoria Country.

Queensland head coach, Craig Starcevich, was pleased by his side’s efforts to respond following the loss.

“They were desperate to rectify Monday’s loss. We wanted to unnerve the opposition a little bit,” Starcevich told aflq.com.au.

“We improved pretty much everywhere. We always have some dominance in the ruck but today we started to win some clearances as well.”

“Our tackling pressure was the real highlight. Once the game started that way, the opposition felt as if that pressure was coming every time.”

Queensland’s landmark win over Metro was played in dominant fashion.

The opening term was played well and truly between the arcs as both sides fought to control possession of the ball; unable to generate any genuine scoring opportunities.

One Metro behind would be the only score of the opening stanza – a result reflective of the game’s ferocity.

Queensland’s relentless attack on the ball quickly willed them ahead around the stoppages, laying 20 more tackles than their opposition in the quarter.

Finally, the goalless deadlock was broken by Bond University product Charlotte Hammans in the second term, who drifted forward to put the Queensland side ahead after a gutsy run from the wing.

Victoria Metro returned fire through a cheeky opportunistic snap by Serong Caleb in the goal square.

Queensland emerged as the better side well and truly in the second term, in large due to the dominance of Lauren Bella in the ruck, who lead the hitouts at half time 14-2.

The home side edged themselves ahead in the shadows of the main break after Isabel Dawes found the goals in seemingly no space; extending the margin to five points.

Charlotte Hammans and Coorparoo’s Jade Ellenger both came agonisingly close to converting their opportunities in front of goal, but couldn’t muster the distance required to get it over the line.

The third quarter was a goalless affair as neither team could find the goals, but it was evident Queensland were truly on top.

Victoria Metro produced just one inside 50 for the term – with 50 seconds remaining– against a barrage of Queensland attacking waves.

Nat Grider and Groves-Little continued their strong form in the game after a stellar opening half, combing to create a near-impenetrable force across half-back.

Queensland's captain Natalie Grider is having an excellent #AFLWU18s championships!

How about this great intercept mark ? pic.twitter.com/5z9wCGvaEx

But despite Queensland’s dominance, the side were unable to display their stronghold on the scoreboard. Instead, it was Holly Bate of Victoria Metro who kicked the first goal of the final term.

Following Bates’ major, the deficit between the two sides sat at just one point in favour of Queensland.

Yet just as Metro appeared to have wrestled their way back into the contest, Queensland produced a quartet of inside 50s.

The first two, from free kicks to Georgia Bremar and Jesse Tawhiao-Wardlaw, couldn’t be converted to goals.

The next two, both through Zimmorlei Farquharson resulted in goals to the pair – Queensland’s first majors since the second term.

The two goals pushed the result beyond doubt.

Jaqui Yosrton was Queensland’s highest disposal winner in the game, finishing with 19 touches, five inside 50s and four clearances.

The loss was soured by first and second quarter injuries to Kitara Farrar, who was stretchered off the field after receiving a knock to her head, and Zeckeisha Oakley, who also was on the receiving end of a head-high hit.

Queensland’s next game in Round 2 of the Carnival will be on Friday at Bond University against the Eastern Allies.

Mackay boy learning the ropes
From Ohio to the Bullsharks: Bond University look abroad in 2018