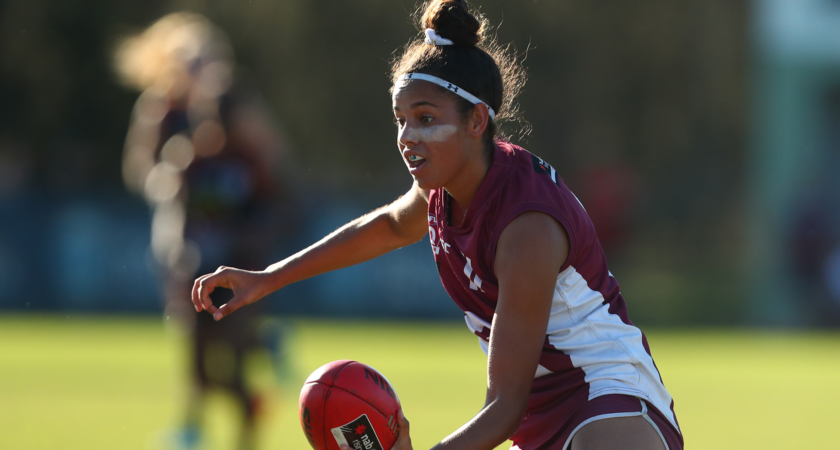 The Queensland representative team had their final game in the NAB AFLW U18 Women’s Championships over the weekend, rounding out the tenth year of competition.

The Central Allies escaped with an agonising one-point win as the Queensland side let opportunities to capitalise slip them by, Queensland coach James Gellie said.

“I think the effort the girls put in was really good, just didn’t quite get the result on the scoreboard,” he said.

“Their effort to fight back a couple of goals down heading into the last quarter was fantastic.”

Stand-out performances were seen in the Queensland side from the likes of Ellie Hampson, who managed 22 disposals, also came away with the Most Valuable Player award for Queensland.

Maddison Levi made her side proud with a solid performance of 13 disposals, five tackles and a booming kick that left defenders in the wake.

Charlotte Hammans was instrumental across the halfback and Zimmorlei Farquharson presented well up forward, quickly accumulating both tackles and a number of scorng opportunities for the home side.

The championship encourages coaches to be flexible with player positions giving players the chance to develop different skill-sets in various positions, something the Queensland side did “really well” Gellie said.

“They’ve had a really good opportunity over the whole program to be able to play in different positions and give themselves a chance to develop a different skill set.”

For the past seven weeks, the Queensland squad have improved greatly through this talent pathway and are a completely different team in the wake of the competition.

“Different circumstances, different team that played with their effort and understanding of the way we wanted to play, I thought it was absolutely fantastic and credit to themselves. The way they embraced [the championships] and the way they improved.”